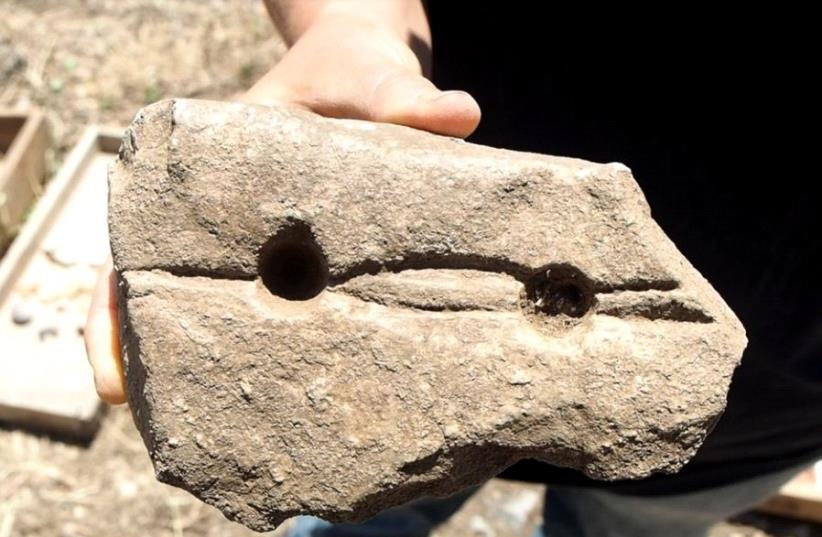 Limestone Lag Ba'omer
(photo credit: ASSAF PEREZ, COURTESY OF IAA)
Advertisement
The Israel Antiquities Authority has revealed the discovery of a rare, 9,000-year-old slab of stone that would have been used to ignite fires. The announcement came just in time for the festival of Lag Ba’omer on Sunday, during which Jews customarily light bonfires.Prehistorian expert and archeological dig manager Anna Eirich-Rose described the discovery as an “extraordinary find.”“The ancient people of the New Stone Age prepared these thick slabs of limestone with two indentations. Some thought that we might have discovered a primitive board game, but according to researchers from the Hebrew University in Jerusalem, the slabs were used to ignite fire,” Eirich-Rose explained.“The mechanism enabled the user to rotate a tree branch in the indentations at a very high speed, which combined with a flammable material inside the indentation, would lead to ignition.”The stone was unearthed approximately one week ago during an archeological dig near Ramat Beit Shemesh, approximately 40 kilometers southwest of Jerusalem, prior to work on one of Israel’s major roads.The Antiquities Authority dig is being funded by the National Transport Infrastructure Company.Evidence of the production and use of fire, found through the discovery of coal and ash in the area, exists from the Early Stone Age, approximately 800,000 years ago. The use of fire became more prevalent during the Neolithic Age, approximately 10,000 years ago.The Antiquities Authority‘s National Treasures Department is home to 10 such slabs of limestone from the same era.Other items found during the excavation include a fragment of a bracelet, tools made of flint and animal bones.