Parents seek donations for lifesaving surgery for their infant born with a rare esophageal defect. 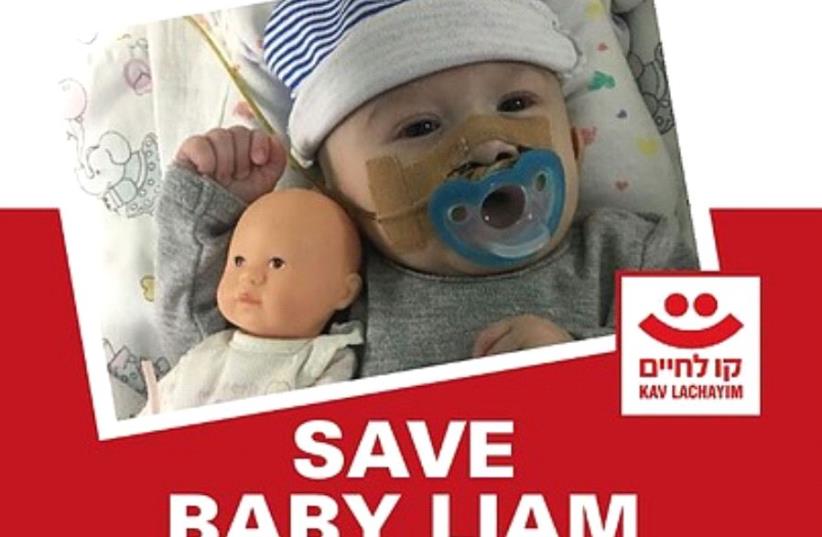 The 'Save Baby Liam' campaign
(photo credit: Courtesy)
Advertisement
The parents of six-monthold Liam Izhak Tamir have launched a campaign seeking donations for lifesaving surgery for their baby boy.The campaign was launched via Kav Lachayim, an association that provides solutions for children with disabilities and rare syndromes.“Our baby Liam Izhak Tamir has never seen the outside of the hospital,” the baby’s parents, Aviad and Sarah Adelia Tamir, wrote in a heartfelt plea.Baby Liam was born in Israel two and a half months early with a rare birth defect affecting his esophagus, called esophageal atresia. He has never been able to eat on his own and has been fed via a feeding tube his entire short life.One month after birth, Liam underwent major surgery to fix his condition – but the surgery failed and no other treatment has been able to help him since.“Now he’s six months old and still in the [neonatal intensive care unit], where our days are spent by his tiny bed,” his parents wrote.According to the campaign, the only way to save Liam is to fly him to Boston Children’s Hospital in the US, which specializes in treating his condition and conducts hundreds of such successful surgeries every year.The operation is a complex and expensive one, the parents noted, with an estimated cost of $550,000 (approximately NIS 2 million).“Every donation made will help us get closer to the treatment needed to provide Liam with a full and happy life,” the parents wrote.
Donations can be made at http://www.kavlachayim.co.il/saveliam.