"The supermarket chains are greedy and the farmers and consumers are paying the price." 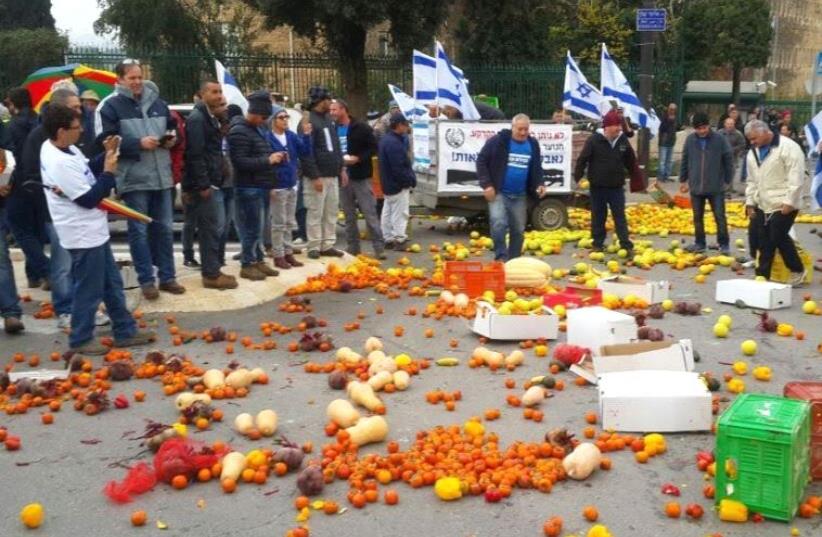 Farmers gather in front of the Knesset on Monday to protest government agricultural policies
(photo credit: FARMERS FEDERATION OF ISRAEL)
Advertisement
Thousands of farmers from across the country gathered in front of the Knesset Monday afternoon to protest high water costs, competition from imported produce and low profit margins.Daniel, a 36-year-old avocado and mango farmer from the Galilee, said he was demonstrating after enduring years of what he called unfair commerce practices.“The government has made it difficult for us to make a profit from our crops, which makes it harder and harder every year to produce our fruits and products,” he said, requesting that his last name not be published.“They have increased the price of water, opened the gates to foreign imports and just don’t have the patience and confidence that we can do whatever is necessary to do our jobs.”Moreover, Daniel said major supermarket chains, such as Rami Levy, routinely buy farmers’ produce at exceedingly low prices and then sell it at a mark up of as much as 700% in their stores.“The supermarkets are buying our products for a shekel and then selling it for up to NIS 7, so basically they have us in handcuffs because we have to sell them our products, and they use the situation to shortchange farmers around the country. We make a profit, but not the kind of profit we should get.”Daniel continued: “The farmers are supposed to be the ones who control the market, not the supermarkets. We work year-round, do all the hard work, we sweat, drown in the mud, and get wet in the rain just to make some profit, and it’s not fair that they hurt us.”Ariel Kuperberg, a 44-yearold pesticide inspector in the North, wore a blue and white shirt stating “We are saving farming in Israel,” and carried a green, red and yellow sign reading “Farmers from the Galilee say the government is shutting down agriculture in Israel.”Noting that most farmers work land near the borders of hostile countries, Kuperberg said that in addition to causing financial losses, the government is compromising security.“The farmers are living and working on all the borders of Israel and are the people who are securing the land to feed people, and we are seeing that the government is neglecting these areas,” he said.“They [the government] are increasing taxes, bringing in fruits and vegetables from abroad and making farmers’ lives more and more difficult,” he continued.Kuperberg lamented that the present government stance is nothing new.“It’s not only this [administration], it is a legacy of Israeli governments,” he said. “The government has to support the farmers by not bringing in foreign produce and not allowing our farmers’ produce to be sold to the grocery chains for such low prices.”“If you insist on bringing in foreign food, then tax them fairly,” Kuperberg added. “All of the governments around the world are supporting farmers and Israel should be no different.”Eitan Lipszyc, 57, who grows peppers and dates in Zofar Aruvav, near Eilat, said “agriculture in Israel is falling apart.”“It’s collapsing because we grow the vegetables and fruits, and [provide] the eggs and meat and milk, and the government is putting a lot of taxes on us and doesn’t handle agriculture in Israel the way it should,” he said.“They import everything from Turkey, from Europe and from Jordan. We think the government should take care of us and stop importing everything from abroad and let us grow everything that they import.They don’t need these countries to send their produce into Israel.”Lipszyc added that the egregious price differential between what he sells his produce for and what customers are charged in supermarkets is predatory.“They buy low from us and charge customers way too much, so the middlemen are making all the money at our expense,” he said. “We think that the government should make a different policy by putting in place regulations for the people who are buying from us and profiting from the citizens.”“The supermarket chains are greedy, and the farmers and [consumers] are paying the price,” Lipszyc continued. “The Agriculture Minister should focus on farmers. He’s not doing his job, and the government doesn’t see us.”Avi Balila, a 66-year-old orange farmer from Moshav Tel Adashim, echoed the other demonstrators’ sentiments.“When we sell our oranges, or whatever it is we grow, we sell it for NIS 1 and then the supermarkets sell it for between NIS 7-10, and we get nothing,” he said.“And after this, the government comes in to tell us that we are the guilty ones in this situation, and we don’t know why. We also want the prices of water to be lower so we can grow our food at a lower cost and sell them at competitive prices.When the supermarkets sell our food for so much, sales are lower and everyone blames us.”“The government,” Balila added, “is helping the rich supermarket owners, not us.They are against us.”In a statement released Monday, Avshalom Vilan, secretary- general of the Israel Farmers Association, lambasted what he called “a right-wing government with two left hands.”“Instead of nurturing agriculture, food security and attachment to the land, in recent years the government has rendered agriculture an insolvent, existential threat,” said Vilan, adding that it must “allocate the necessary resources” to revive the struggling industry.On Sunday night, the day before water prices were expected to be raised, Agriculture Minister Uri Ariel said he turned to Finance Minister Moshe Khalon to lower the price, or risk “creating a crisis and damage to agriculture and farming in Israel.”In a letter to Kahlon, Ariel said he sees the Farmer’s Federation as an important strategic partner and that he had drafted an agreement to reduce water costs.