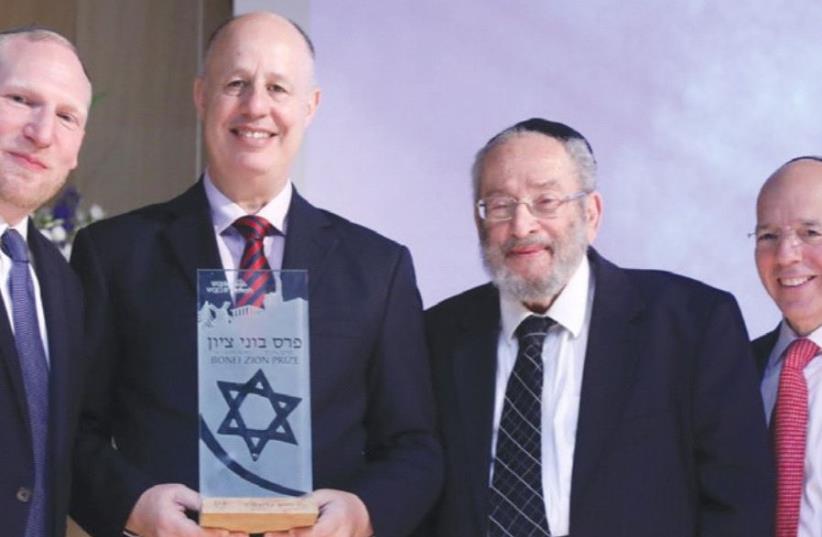 RABBI CHAIM BROVENDER (second right) looks to receive his award, accompanied by Regional Cooperation Minister Tzachi Hanegbi (center) and Nefesh B’Nefesh cofounders Rabbi Yehoshua Fass (left) and Tony Gelbart.
(photo credit: KNESSET)
Advertisement
At a ceremony honoring nine English-speaking immigrants to Israel who were awarded Nefesh B’Nefesh’s annual Bonei Zion Prize, Regional Cooperation Minister Tzachi Hanegbi said aliya is Israel’s strongest weapon.“You see in the headlines, media and newspapers [stories] about tension, but all these issues are not as important as this event, because this event, and aliya as a whole... this is the answer,” Hanegbi said at the ceremony at the Knesset on Monday. “This is the strongest answer that we can give to those who wish for our demise.”The annual award, sponsored by Sylvan Adams, a recent immigrant himself, specifically honors the achievements of English-speaking individuals who have moved to Israel.Prof. Benjamin W. Corn is a cancer doctor and cofounder and chairman of Life’s Door, an organization working to integrate spirituality into medical treatment. He said coming to Israel changed the trajectory of his career for the better.“I’ve done a bunch of things here that I never would have done in the conventional path I was traveling in Philadelphia before I made aliya,” he said.“It would’ve been fine, but the things we’ve done here, and the people we’ve touched have just been exponentially multiplied.”Beth Steinberg received the prize in the category of community and nonprofit for her work founding and directing Shutaf Inclusion Programs, an organization dedicated to disability inclusion. She said the award is a tribute to the work that she and cofounder Miriam Avraham have done in a field that is only beginning to be understood.“I accept this award for Shutaf, for myself and for Miriam – both of us olim – and for every Shutaf family, and everyone out there who dreams of a more accepting world,” Steinberg said.Rabbi Chaim Brovender, a prominent Torah teacher and founder of the Academy for Torah Initiatives and Directions in Jewish Education, said the award is significant because of its recognition of teaching Torah, rather than a recognition of personal accomplishment.“The idea that they’re giving this prize to someone who is a teacher of Torah, I thought that that was a good thing,” Brovender said.“Teaching Torah is, compared to many other things in the world today, a sideline. It’s not like medicine or politics or research. It’s kind of a little off the beaten track, but I think that it’s very important for the Jewish people.”In addition to Corn, Steinberg and Brovender, the award was presented to Prof. Gerald Steinberg for Israel advocacy; Yoram Raanan for culture, arts and sports; Profs. Alice Shalvi and Eliezer Jaffe for lifetime achievement; and Capt. Libby Weiss and Scott Neiss for young leadership.