Israelis and Palestinians unite over horses

“The Arabian horse has a magic, anyone who comes near one will be obsessed,” says Sufian Taha, 49, a horse breeder from east Jerusalem. 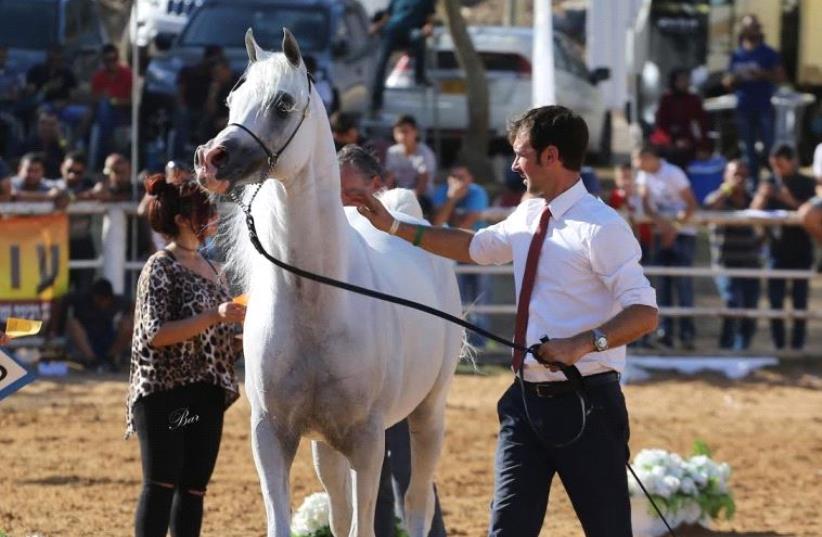 Israeli National Arabian Horse Show at Kibbutz Alonim in northern Israel
(photo credit: BAR HAJAJ)
Advertisement
The Arabian horse has large eyes and nostrils that flared as handlers paraded them around for the annual Israeli National Arabian Horse Show at Kibbutz Alonim in the Lower Galilee. The horses’ distinctive concave nose bridge appears as if a sculpture took a chisel and etched away a large curved portion of the bridge – or a plastic surgeon got a little too eager.Yet breeders throughout the Arabian Peninsula and the Levant attempted to fashion these characteristics over millennia; now this horse breed is world-renowned and sells for thousands and in some cases millions of dollars.“The Arabian horse has a magic; anyone who comes near one will be obsessed,” said Sufian Taha, 49, a horse breeder from east Jerusalem and one of only two international horse judges from Israel and the Palestinian territories.At Alonim, the passion for Arabian horses was on full display.Unlike European horse shows, which are typically subdued affairs, Jewish, Israeli-Arab, and West Bank Palestinian breeders were boisterous, clapping and cheering in unison for the prized animal. In the VIP sections, where a table costs a few thousand shekels, Israelis and Palestinians mingled comfortably.“The atmosphere at the Israeli horse show is more like family,” said Muntaha Kahook, who was born in Jerusalem but now lives in Jordan and Florida. Her stable, NK Arabians, brought horses from Jordan for the Israeli championships. “When it comes to horses everyone is family; the love for the horses brings us together,” she said. A horse handler coaxes his horse at Kibbutz Alonim
Chen Kedar, owner of Israel’s most highly regarded horse stable, Ariela Arabians in Moshav Hayogev west of Afula, reflected Kahook’s sentiment: “Sometime we are not as polite as the European shows, but maybe that is better. Everyone is mixing at the tables... People from every background will sit for hours talking about pedigrees.”Horses from Ariela Arabians have also been sold to countries with which Israel does not have diplomatic relations including Bahrain and Qatar.Along with Taha, Kedar is the second international horse judge from Israel and the Palestinian Territories. A Druse man has begun the arduous training process to make it a trio.There are around 8,000 Arabian horses registered in Israel and the Palestinian territories with the World Arabian Horse Organization.Around 10% of the horses are owned by West Bank Palestinians while around 50% are owned by Israeli Arabs. The majority of large and internationally known horse breeding operations (over 30 horses) are owned by Jews, while many horses from Israeli Arabs come from the small family-led breeding operations. At the 2016 championship, the award of the most prized category of horses – the stallion – was taken by Bacher, a four-year-old horse owned Khader Abu Halawa from Lod.The community of breeders that make up Israel’s Arabian horse society are tight-knit and jovial. Many also appreciate and acknowledge the unusual space horse breeding has created for dialogue and friendship between communities that remain largely separated and detached.Speaking at the opening ceremony, which took place on the same day as former president Shimon Peres’s funeral, Kedar drew a comparison to Peres’s aspirations for peace: “[Peres’s] dream to see a new Middle East has not yet come to life; but if he could see this show today he would see a taste of his vision come to life here with us today.”The mixed crowd then took a minute of silence for the fallen statesmen, although some declined to stand. “Not everyone stood, but everyone was respectful it was really nice to see,” Kedar told The Jerusalem Post.Yet despite efforts to keep to keep the Arabian show free of politics, tensions have proven to be obstacles; last year’s Arabian National was canceled because of the wave of stabbing attacks, which started in September. According to Taha, the show was canceled as the cost to provide adequate security for the show was prohibitive for the Israel Arabian Horse Society.“There was too much tension at the time; it was good that they didn’t host it,” said one Jewish horse breeder who declined to be named. 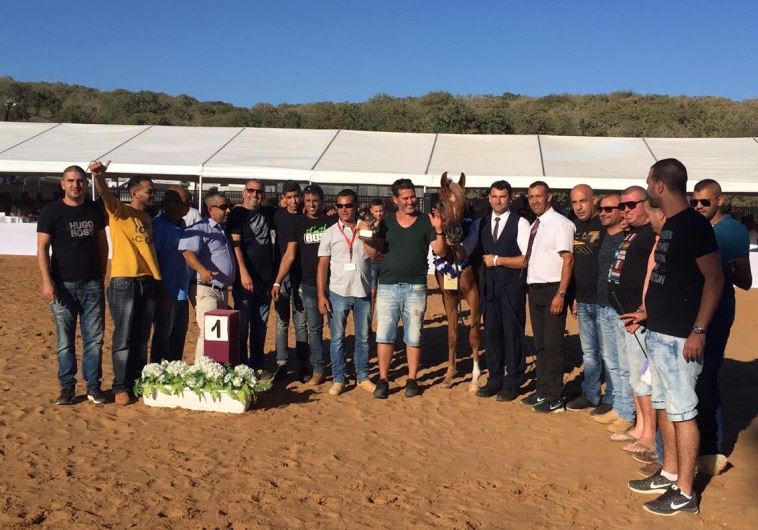 "Nabella Ajman" a champion horse strikes a pose with her owners and trainersPalestinian breeders also face challenges in bringing horses to Israel and according to Taha Jewish breeders will sometimes carry the horses across Israeli checkpoints to ease the travel.“A stallion died at the Bethlehem checkpoint because he couldn’t reach the hospital in time. It was a very sorry incident,” Taha said.Lena Awad, an organizer for the Arabian Horse Society of Palestine expressed frustration at the lack of Jewish-owned horses that will join the Arabian horse show this November at the Jericho Equestrian Club. “Israelis don’t come to Jericho because they are too scared, even though we are with them at Alonim,” she said, “You must understand how hard it is for a horse to stay in transport for more than an hour, especially in the heat, so the journey to Alonim is hard for them.”Ahmed Hawaj, a horse trainer at the Jericho Equestrian Club, which did not send any horses to the Israeli national competition, said bringing horses from Jerusalem through checkpoints is usually uncomplicated, however, “it depends on the solider at the checkpoint, sometimes they send the horse back for reasons I don’t know.”Israeli authorities hold that entry and exit through checkpoints is determined strictly by security considerations. It is also illegal for Israelis to enter Jericho or other Palestinian Authority- administrated cities without coordination from the IDF.Nevertheless the horse show at Kibbutz Alonim displayed a high level of camaraderie between Israeli Arabs and Jews and Palestinians. “Horses set an example of living together that politicians failed to accomplish,” Taha said. “You need a clean heart to breed these horses.”
Advertisement
Subscribe for our daily newsletter