Masha Zuslam's lawyer claims that the city eviction notice is due to his hosting of a left-wing lecture from the NGO Breaking the Silence. 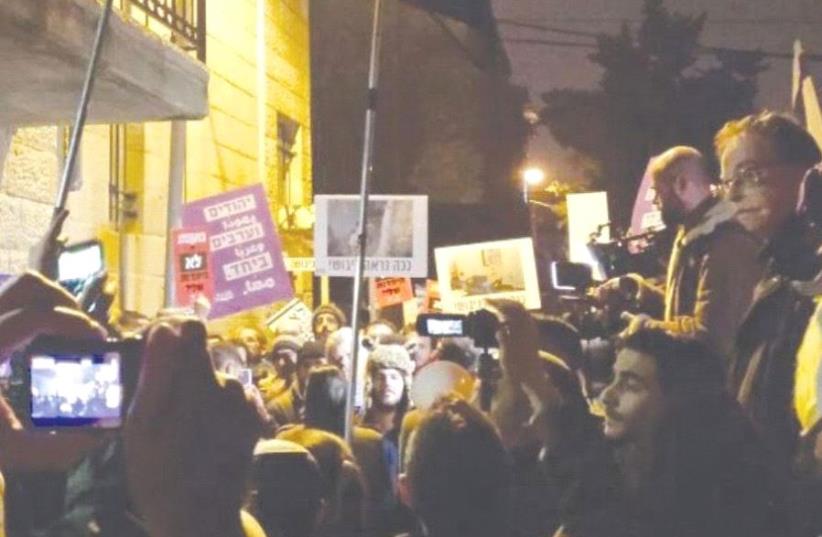 Protesters and supporters of Breaking the Silence lecture gather outside of Barbur Art Gallery in Jerusalem in February
(photo credit: RHONA BURNS)
Advertisement
The owner of Jerusalem’s Barbur Art Gallery, who was ordered by the municipality to vacate the premises within 90 days after hosting a February lecture from the left-wing NGO Breaking the Silence, is refusing to submit to the edict.The eviction was ordered one day after Breaking the Silence’s executive director, Yuli Novak, spoke at the Nahlaot gallery. The NGO has been condemned by Prime Minister Benjamin Netanyahu for its use of IDF veterans who accuse fellow soldiers of committing war crimes in the West Bank and Gaza.After right-wing political leaders demanded Novak’s speech be canceled, Jerusalem Mayor Nir Barkat issued a statement saying that the municipality’s legal team had determined that the owner of the gallery was not authorized to use it as a lecture hall.Barkat added that the building is municipal property, and must be returned to the city within 90 days.While the mayor contended that the eviction was due to “zoning violations,” Breaking the Silence spokesman Dean Issacharoff said there is no question the right-wing mayor was abusing his authority to intimidate opposing views.“He obviously wants to stifle freedom of speech in order to stop us from talking about our experiences as soldiers in the occupied territories,” Issacharoff said at the time.According to the mayor, the eviction is unrelated to the lecture.“It has no connection to freedom of expression,” he contended. “The municipality needs the structure, and is actively consulting with representatives of the neighborhood about future use.”The gallery’s owner and curator, Masha Zuslam, expressed incredulity over the eviction, noting that she had not received any advance warnings or notices from City Hall.“We didn’t get anything from the municipality,” Zuslam said, adding that she has run the gallery for nearly 12 years without any previous citations.“Everything we know is from the press. The mayor is trying to punish us because we have different political views.”Despite a protest held by the right-wing group Lehava, Zuslam said the lecture proceeded as planned, adding that far more demonstrators came to support the gallery’s right to sponsor the talk and to condemn the mayor for intervening.“We had a very big demonstration of support,” she noted at the time.On Tuesday, Yossi Havilio, an attorney representing the gallery, sent an open letter to the municipality stating that the eviction, scheduled to be enforced in two weeks, is ostensibly based on political ideology, and therefore is unlawful.“Any attempt to hide behind technical legal interpretations is not serious,” the letter stated.“This is a fundamental and crucial issue of freedom of speech. A local authority cannot prevent the voicing of diverse opinions in a municipal property. Therefore, the municipality’s decision is illegal, and we do not intend to vacate the gallery.”In a strongly worded statement, the municipality maintained that the eviction is exclusively based on legal merit.“The public is fed up with the lies of the directors of the Barbur Art Gallery and their cheap attempts to present the issue as related to freedom of speech,” the statement said. “The facts are that the gallery is situated in a property that is not authorized to serve as such, and does not have a proper permit.“The municipality is therefore obligated to demand that they evacuate in accordance with the bylaws and directives of the municipal comptroller.The gallery will be evacuated in accordance with all the legal procedures, and the property will serve the neighborhood as it was originally intended.”