Jerusalem rabbis speak out in support of the Pride Parade

Rabbi Donniel Hartman: everyone must fight for the place of LGBT community in society for Israel to be the homeland of the Jewish people. 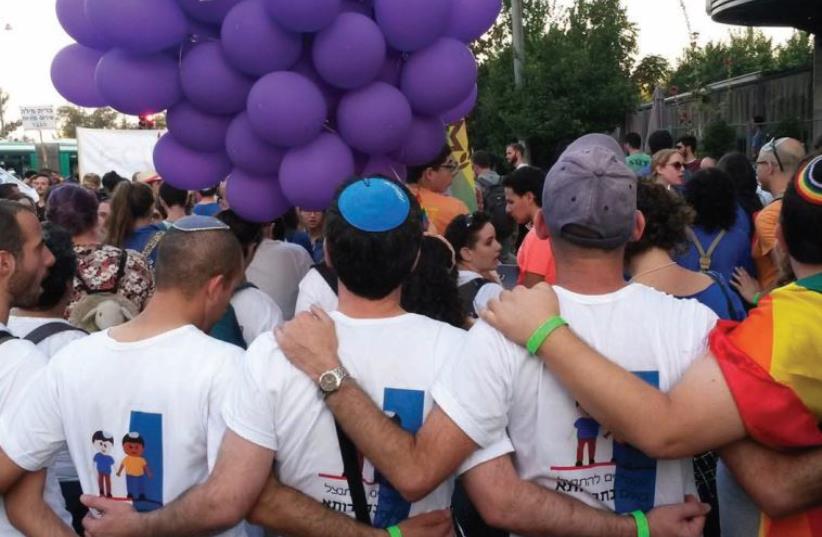 Havruta, an organization for religious gay men in Israel, marches in the 2015 Pride Parade
(photo credit: ELAD LIFSHITZ)
Advertisement
Despite hundreds of rabbis speaking out against Jerusalem’s gay parade and Rabbi Yigal Levenstein’s anti-gay comments, a Jerusalem-based Orthodox rabbi nevertheless gave full support to the event.“I feel there is a community who is being oppressed at the moment, and society is judged on how you treat your disenfranchised,” Rabbi Donniel Hartman told The Jerusalem Post.Hartman is president of the Shalom Hartman Institute, a pluralistic research center for Jewish thought. He voiced strong backing for the Jerusalem Gay Pride Parade and even participated in the march.The Orthodox rabbi was highly critical of the recent rhetorical attacks on the gay community and said it was critical for Israeli society as a whole to rally around LGBT people.“I think it’s important that the LGBT community feels that they are not alone and that Israel is as much theirs as it is mine,” he said. “We need to make space for everyone, and the place of LGBT people in society is something not only they, but we too, have to fight for, because only then is this the homeland of the Jewish people.”Hartman said his decision to attend the parade this year for the first time had been strongly influenced by Levenstein’s and others’ comments, saying he believed they had given rise to a “legitimacy of disrespect and disenfranchisement” of the gay community.“When that happens to members of my society I want to be there,” he explained.More broadly, the rabbi said he believed the modern-Orthodox and religious-Zionist movements were at a critical juncture regarding the way sexual orientation is viewed, and said these communities “need to evolve regarding these attitudes” in a similar manner to how they evolved in regards to the role of women in communal life.“The definition of what is deviant and what is not shifts over time,” he said in relation to the explicit prohibitions in the Torah against homosexuality. The question is now if people are willing to accept that two consenting adults aren’t harming anyone and that this is an expression of their sexuality, their love, and their relationship and cannot be defined as deviant.“Anyone who knows about Halacha knows that our ability to reinterpret texts is almost infinite,” Hartman continued and said he had “no doubt” that Jewish law would evolve to accept homosexuality.Rabbi Chaya Rowen Baker, who heads the Ramat Tzion Masorti community in Jerusalem’s French Hill neighborhood, also gave her full backing to the parade.She said it was essential “for all rabbis to come out in favor of full rights for the gay community alongside the religious perspective that all people are created in the image of God.”The rabbi argued however that the parade this year was about more than gay rights, and was part of “the struggle for pluralism and moderation and against extremism in our country.”She also rejected claims that staging a gay parade in Jerusalem was a provocation, as was claimed by several rabbis this week, saying tolerance of the LGBT community was needed particularly in the capital.“There is no holiness inherent in a place. Holiness comes from what happens in a particular place. If we want Jerusalem to be a holy city, then it needs to be a place where there is no injustice,” said Rowen Baker.She added that she was “saddened” by the lack of recognition in the haredi (ultra-Orthodox) and national-religious communities that there are homosexual people in their own communities, and said failure to acknowledge this created suffering for such people.The Havruta association of religious gays issued a statement ahead of the parade, deploring what it described as “homophobia in the religious community in Israel,” and the “homophobic comments of public officials and rabbis who continue to see us as a threat to society and calls us ‘perverts’ and handicapped.’"