Jpost Editorial: Israel and the PA

As difficult as it may be to see the forest for the trees the IDF’s recommendations should be seriously considered and hopefully adopted by the government. 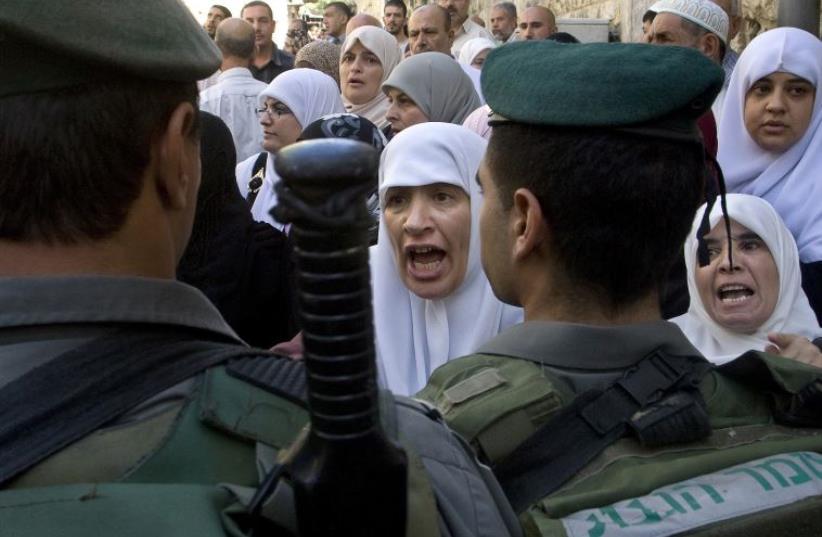 Palestinian women shout in front of Israeli border police officers
(photo credit: REUTERS)
Advertisement
Following two months of unrelenting terrorist attacks waged by Palestinians against Israeli civilians and security personnel, it probably wasn’t the message that most of the battered populace wanted to hear.We’re referring to Wednesday’s recommendations issued by the IDF to the government to take steps to strengthen the Palestinian Authority. According to the military assessment, the “limited uprising” – which has taken the place of “wave of terrorism” in describing the stabbing, shooting and stone-throwing attacks – has sparked concern over the potential future disintegration of the PA if the violence continues to mount.The recommendations include enabling PA security forces – deemed a moderating influence in the area – to acquire more firearms and armored vehicles, releasing Palestinian prisoners with light security offenses, and increasing the number of Israeli work visas for West Bank Palestinians to bolster the Palestinian economy and theoretically moderate the ongoing terrorism against Israelis.As difficult as it may be to see the forest for the trees, especially when it’s littered with the blood of 23 Israelis who have been murdered in the last two months, the IDF’s recommendations should be seriously considered and hopefully adopted by the government.According to the IDF, the bulk of the terrorist attacks have been perpetrated by unorganized gangs or lone wolves, and not by the usual suspects like Hamas or Islamic Jihad. These mostly untrained assailants (some as young as 13) have been influenced by Palestinian incitement, the radical ideology of Islamic State, and extreme social media postings, and are not part of an overall strategic assault on Israel, symbolized by the onslaught that took place in the second intifada.Despite the gruesome headlines and heartbreaking stories – whether it’s Eitam and Naama Heinkin who were murdered on October 1 in their car in front of their small children, 18-year-old US citizen Ezra Schwartz, who was killed last week at an Alon Shvut intersection, or the most recent victim, IDF soldier Ziv Mizrahi, who met his fate at the Dor Alon gas station along Route 443 near Modi’in on Monday – the continued cooperation between the IDF and PA security forces has undoubtedly prevented even more attacks from taking place.It may be convenient to place the blame for the current state of affairs on all Palestinians, and especially their leaders, and there’s no shortage of issues that must be put on their shoulders – from continued incitement in statements by Palestinian leaders like PA President Mahmoud Abbas (with his offensive “filthy Jewish feet” on the Temple Mount comment) to more organizational incitement via textbooks and media that raises generations of Palestinians to view Israelis as sub-human usurpers.However, what must be remembered is that the vast bulk of the Palestinian population of the West Bank, whether they support terrorism against Israel or not, are not terrorists.Collective punishment in the form of an increased clampdown on movement or civil liberties or house demolitions only serves to radicalize more of the population and increase the likelihood of mass protests with high casualty levels that could in turn drag the armed terrorist organizations into the equation.As Defense Minister Moshe Ya’alon pointed out Wednesday at the launch of the Amnon Lipkin Shahak Program on National Security and Democracy at the Israel Democracy Institute, Israel must face the challenge of confronting terrorism head on and not infringing on the lives of the widespread Palestinian population.“It’s a moral question, and you need to make decisions.How do you let those who are not involved in terrorism, who want to live in cooperation with Israel, continue with their everyday lives, but also provide an answer to the individual terrorists, coming from the civilian population, with knives, car attacks, shooting attacks and everything else?” he asked.His answer, which dovetails with the IDF recommendations, is to strive to allow both the Arab and Jewish civilians in Judea and Samaria to live their lives as freely as possible.That requires cooperation with whoever can bring calm to the area, Palestinian security forces included.Amid the anguish the country is experiencing, it is a glowing testament to our principles that our defense minister chose to speak about protecting our values and remaining humane in the face of inhumane acts against us.