The judicial counterrevolution must be led by a consensual and varied forum, not by one sectarian party.

By AMOTZ ASA-EL
MAY 26, 2018 17:29
The Knesset building in Givat Ram, Jerusalem
(photo credit: MARC ISRAEL SELLEM)
Advertisement
It’s nothing new.Thomas Jefferson decried already in 1820 the Supreme Court’s power, recalling the landmark Marbury vs Madison ruling of 1803 that established the judges’ authority to cancel a law passed by Congress by ruling it unconstitutional, or in legalese – exercising judicial review.Though in issuing the ruling the court actually acted in the newly elected Jefferson’s favor, canceling outgoing president John Adams’s “midnight appointment” of a Federalist judge, the new power that the judiciary assumed alarmed Jefferson.Making judges “ultimate arbiters of all constitutional questions” is “a very dangerous doctrine indeed,” he warned, and would produce “the despotism of an oligarchy.”Two centuries on many Israeli also feel that is what happened to the High Court of Justice. 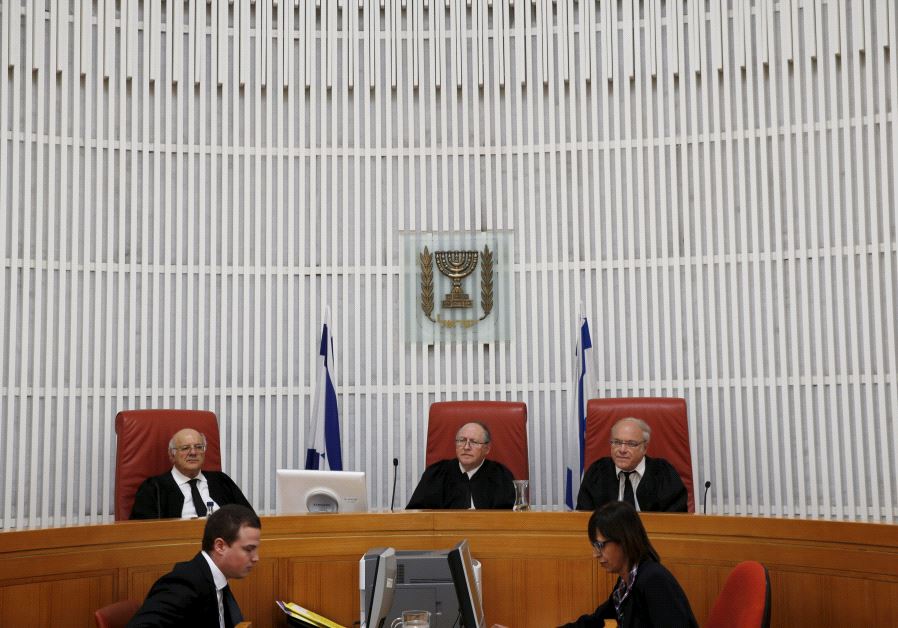 The Supreme Court in Jerusalem hearing a case, August 19, 2015. (Reuters)Unlike conventional wisdom, our judiciary’s critics include many leftists, such as former Histadrut labor federation chairman Haim Ramon; former Meretz member and Israel Prize laureate for law Daniel Friedmann; and the dean of Israel’s political scientists, Shlomo Avineri, who wrote in 2004 that an issue like the location of the West Bank security barrier should be decided by elected politicians, not by unelected and un-dismissible judges.Noting that the separation of powers principle says the three branches should restrain each other, Avineri argued that, in Israel, “after the Supreme Court ruled that any citizen can appeal to it directly, and that ‘everything is judicable’ and even in real time, no one can restrain the High Court except the High Court itself.”Calling on the judges to refuse to rule on such issues, Avineri noted that the Israeli court’s interventionism is unparalleled in the entire world, and that in the US an issue like the barrier’s location would never reach the Supreme Court.That was last decade. Now our 26-yearold judicial revolution is drawing to a close, and the question is what should replace it.THE STRUGGLE over the Supreme Court’s power stems from the Knesset’s wise decision in 1950 not to pass a constitution but to gradually pass a set of “basic laws” that would carry constitutional power.It was a consensus-seeking model that respected uniquely Israeli conditions, such as the gaps between religious and secular Israelis, which made it difficult to draft a broadly consensual constitution.The Knesset therefore adopted in subsequent decades eight basic laws that defined, for instance, the tasks of the army, the foundations of the taxation system, and the presidency’s powers.The process evolved smoothly until it veered from shaping institutions to upholding values.The passage in 1992 of Basic Law: Freedom of Occupation and Basic Law: Human Dignity and Freedom produced the kind of judicial authority Jefferson derided, when a 1994 amendment stated that Israel’s basic laws could be compromised “only for a worthy purpose, only for reasons of the public good.”As the interpreter of “a worthy purpose” and “the public good,” and armed with the Freedom of Occupation Law’s statement that human rights will be founded on the principles of the Declaration of Independence, which promises equality before the law, the High Court of Justice could now define as unconstitutional both Knesset legislation and government acts.The court has done so repeatedly, ruling for instance that ultra-Orthodox men’s de facto exemption from military service violated the principle of equality before the law; that a plan to privatize jails violated the prisoners’ human dignity; and that a law allowing illegal immigrants’ arrest for a year without trial violated their right for freedom.Having thus snubbed disparate parts of society, from the ultra-Orthodox to the corporate elite to the working class, the court came under attack, whether for its mostly secular, Ashkenazi male membership, or for its ideology, which arguably defies the conservatism of many, if not most, citizens.In one case the court emerged as not only partial and domineering but also aloofly pontificating, when it ruled in January 2000 that spanking a toddler on the butt constitutes assault, thus incriminating millions of Israeli parents.This is the backdrop against which Justice Minister Ayelet Shaked, legitimately, led the Judges Appointments Committee to insert more conservative justices to the Supreme Court, and this is the context in which she, also legitimately, but very unwisely, introduced the “override bill” which would allow 61 lawmakers to re-legislate a law that was annulled by the judges.Supreme Court President Esther Hayut (L), President Reuven Rivlin (C), Justice Minister Ayelet Shaked (R) at the President's Residence, May 7, 2018 (PRESIDENTIAL SPOKESPERSON OFFICE)THE PROBLEM with Shaked’s bill lies not in its substance but in her position as the representative of a marginal and sectarian party.Finance Minister Moshe Kahlon’s dismissal of Shaked’s bill as the “unilateral” work of “extremists” effectively killed it, and rightly so. The remodeling of relations between the Jewish state’s judiciary and legislature cannot be led by a small party whose leaders either flirt with or fully espouse a messianic agenda that most Israelis do not share.The whole problem with the judicial revolution was that too many saw it as a conspiracy led by one fringe of society against the rest. A counterrevolution led by Bayit Yehudi would be the same thing except the other way around.The rebooting that the judiciary begs must be the work of a broad-based, consensual forum.It should be led jointly by the big parties from both sides of the aisle and include some two dozen politicians, jurists, academics, rabbis, and literati to be chosen consensually by President Reuven Rivlin, Knesset Speaker Yuli Edelstein and opposition leader Yitzhak Herzog.Rather than produce a constitution, this constitutional convention should broaden and diversify the forum reviewing legislation, whether by creating an upper house that would function like Britain’s House of Lords, or by creating a constitutional court like Germany’s, which is appointed by the politicians, or like France’s, which actually includes retired politicians.“Our judges,” wrote Jefferson, “are as honest as other men, and not more so,” and they harbor “the same passions for party, for power, and the privilege of their corps.” So do ours. That is why judicial review should not be their exclusive privilege, as a constitutional convention would make them learn.www.MiddleIsrael.net