In the era of social media the landscape of human dialogue has changed, Lewinsky told the audience at the Israel Museum in Jerusalem. 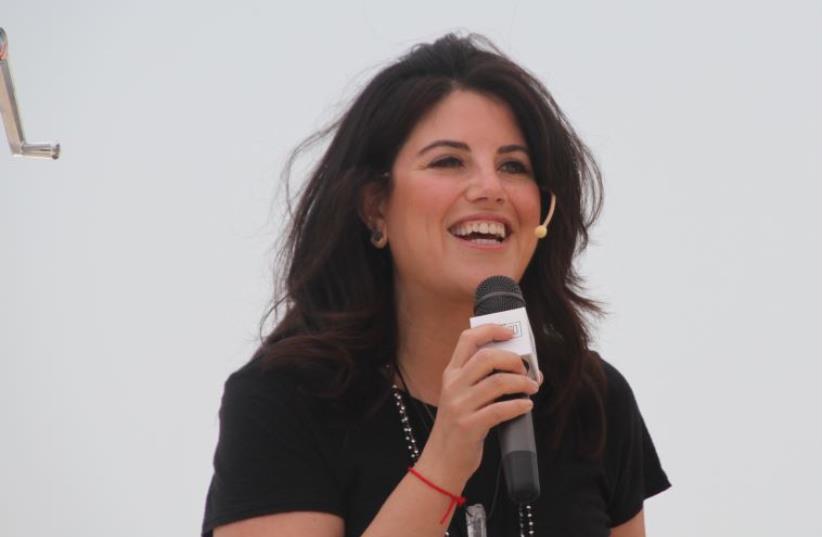 Monica Lewinsky
(photo credit: TOVAH LAZAROFF)
Advertisement
Former White House intern Monica Lewinsky addressed the thorny topic of cyber hate in the Israeli-Palestinian conflict when she moderated a short panel at the Forbes 30 under 30 Summit, which met Wednesday at the Israel Museum in Jerusalem.Lewinsky is an advocate against bullying, because of the personal attacks against her in the aftermath of her affair with then-US president Bill Clinton in the mid- 1990s.“I came to be interested in the topic of bullying because of experiences that I had in the late 1990s. And if you do not know what I am talking about, please do not Google it,” she told the audience as she sat on an outdoor stage in the museum’s Billy Rose Art Garden.Stretched in front of her were dozens of young entrepreneurs sitting on cushions and bean bags, set up under white umbrellas and a straw carpets spread out across the grounds.The question is, Lewinsky said, “how can good people who have different views engage in civil dialogue.I wanted to moderate this panel because of the bullying work I have been doing and seeing all of the harassing and shaming and trolling that is done on line.”The landscape of human dialogue has changed, she stated. “We are now in a place, because of social media, that dialogue, online dialogue, was leading to people sometimes taking their own lives,” Lewinsky said.As a result, she added, “how we chose our words and we communicate is something that we need to pay even more attention to online,” she said.Lewinsky then turned the microphone over to two people who deal with online issues relating to the Arab-Israeli conflict: Muhammad Nasser Eddin, the director of Middle East programming for Seeds of Peace, and Moriya Rosenberg, who is a member of the YaLa Peace Movement.Eddin said that his program brings together Israel and Palestinian teenagers, but that online communication has been challenging because of the comments that are posted about the conflict. The focus of the program is face-to-face dialogue, he said.“What has been challenging is that they [teen participants] would create unhealthy dialogue discussions online,” Eddin said.The participants would post articles and pictures on their Facebook page or the walls of their peers to prove their points about the conflict.“This would invite their friends who never joined the program to say more things that are destructive and bloody. And they do not understand the respectfulness that we created for dialogue and how sacred it is,” he said.Eddin said that the program has encouraged the participants to hold conversations about the conflict in person and not on Facebook, which should be reserved for more social matters.“We encourage them to be the adults on line, to take a step back and say, ‘If I say this, if I post another article that shows he is wrong, what will I change and what will I destroy?” said Eddin.The bulk of YaLa’s work is done on line, said Rosenberg, who represented the Facebook-based program of young adults throughout the Middle East.“It allows people to engage in a safe space where you can be yourself and open up and learn about other cultures,” Rosenberg said, adding that YaLa’s strength lies in being a massive network of support with more than a million members who “boost each others voices. That is what you can do: just join that conversation and don’t think it is meaningless. It is very powerful.”