"The idea for the trip developed from the students wanting to take their studies to the next level." 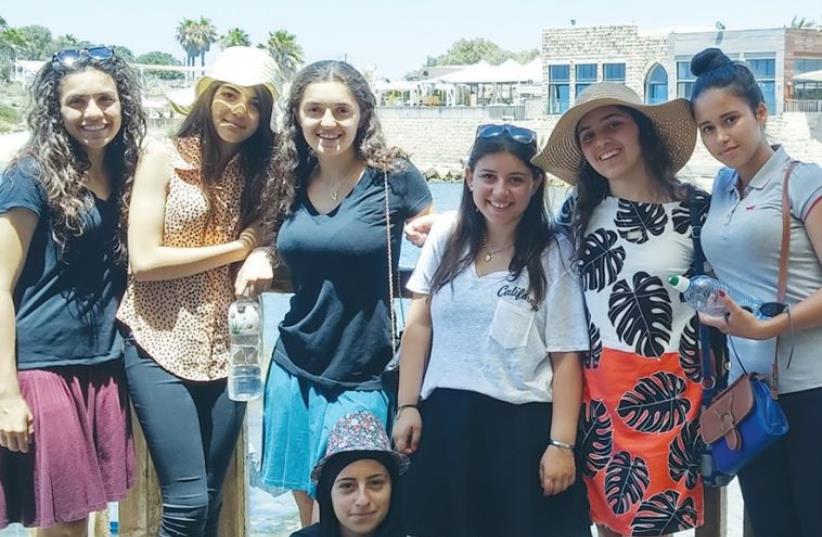 A group of teenage girls, in which half are American Jews and half are Israeli- Arabs from the Galilee, gather for a picture in Caesarea two weeks ago.
(photo credit: Courtesy)
Advertisement
On Saturday night outside Jerusalem’s Damascus Gate eight teenage girls stood together laughing, their arms wrapped around one another. This behavior is normal within any group of young girls – however, the makeup of this group was anything but typical.Four of the girls are students at Yeshiva University High School of Los Angeles, studying Arabic in a one-of-a-kind program for Jewish day schools across the United States. The other four hail from Deir el-Asad and Majd el-Kurum, neighboring Arab villages in the Galilee. These Israeli-Arab teens were invited to participate in a 17-day program where they would travel and live side-by-side with the students in YULA’s Arabic program.YULA partnered with the Galilee Foundation for Value Education, an organization focused on building Jewish and Arab relations in the Galilee. Samia Nasser, who works for the organization, was tasked with finding Arab girls interested in the program, which she called “extremely important for the future of Israel.”“We live in a complicated situation and I often feel pessimistic. If I want to keep living here I need hope to continue,” said Nasser. “This meeting gave me hope and spark of light, I feel there’s light at the end of the tunnel.”An Arabic immersion trip such as YULA’s is one the first of its kind to take place.“The idea for the trip developed from the students wanting to take their studies to the next level,” said Zvi Smith, who implemented YULA’s Arabic program two years ago.Nearing the end of their trip on Saturday, the girls had already gone through a myriad of experiences together, from celebrating Ramadan in Deir el-Asad earlier in the week to sharing a Shabbat dinner in Jerusalem. The trip’s itinerary provided a combination of Jewish and Arab related activities and programs.After observing Shabbat in Jerusalem, the group met for a nighttime tour of the Old City’s Muslim Quarter.For the majority of the tour, the girls’ arms remained intertwined, lingering around each other’s shoulders – suggesting they weren’t quite ready to let go of their newfound friendships and of their experiences from the past two weeks.The girls’ embrace served as a testament to Smith’s mission to intertwine Jewish and Arab culture in order for his students to gain a better sense of what they have in common with Israeli Arabs.For many of the girls, their similarities with one another came as a surprise.Mana Shalikar, who just graduated YULA, said she and her classmates thought for the first few days they wouldn’t have anything to say to their Israeli-Arab counterparts.In addition to English, she speaks Hebrew and Farsi fluently. Many of her classmates dropped out of the Arabic class due to the difficulty and complexity of the language, but her curiosity of Arab culture motivated her to continue learning.“By getting to know the language, you get to know the people. Many Jewish people say they hate and are against Arabs, which is confusing for me, because Jewish people also say they want peace,” she said.After just an hour of getting to know one another, Shalikar said all the puzzle pieces began to fit.Before this trip, Susan Quasquas said she never spent time with Jewish girls before. But now, she refers to the four Los Angeles natives as her best friends, and not “just a bunch of Jewish girls.”The 16-year-old couldn’t pick one favorite memory from the trip, but said she absolutely loved observing Shabbat. She was surprised her Jewish friends couldn’t use electricity or their phones, and had to wait for the elevator in their hostel to stop at every floor.“These past two weeks helped me improve my personality, and makes me now want to be friendlier and meet other Jewish girls,” said Quasquas.Shalikar’s misconceptions about Arab culture and Islam only just started to clear up towards the end of the trip.She said she grew up learning from her surroundings and the news that “every Arab is bad” – a major stereotype dispelled throughout the trip.“It really hit home when a Jewish man invited us into his house for dinner and told us ‘there’s no such thing as good Arabs or bad Arabs, and there’s no good Jews or bad Jews. There’s only good people and bad people,’” she said.When discussions became tense, Shalikar said the group got to the “human level” and they understood their relationship mattered more than anything else.“These girls certainly have advantages for the future, learning how to live with someone from a different background. What these girls accomplished in two weeks, most people don’t ever accomplish in their lives,” said Smith. “Living respectfully and appreciating one another is a life skill difficult for adults to do, much less for 16-year-old girls.”