National carrier will touch down in Buenos Aires for first time since the Holocaust mastermind was smuggled out of the country to be tried in Israel. 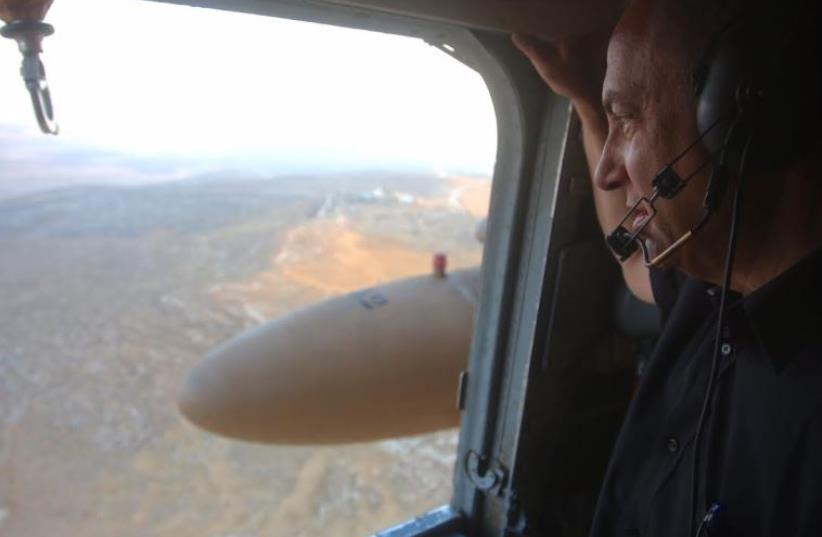 Prime Minister Benjamin Netanyahu flies plane over West Bank
(photo credit: MARC ISRAEL SELLEM/THE JERUSALEM POST)
Advertisement
When an El Al plane flies Prime Minister Benjamin Netanyahu to Argentina next Monday it will be the first plane of the national airline to touch down on Argentinian soil since Holocaust mastermind Adolf Eichmann was spirited out of the country on an El Al jet in 1960.On May 20, 1960, Eichmann – who was kidnapped nine days earlier in a daring Mossad operation – was smuggled out of the country on the El Al plane that flew especially to Buenos Aires, the first ever Israel-Argentina direct flight, to bring a delegation to participate in events to commemorate 150 years of Argentinean independence. Abba Eban, then a minister-without-portfolio, was on the flight, and did not know that plane would bring back to Israel a principal architect of the Final Solution.The kidnapping of Eichmann strained relations between the two countries, a relationship that has known peaks and valleys – more valleys than peaks in recent years – since then. Netanyahu’s visit, however, signals that ties are on a definite upswing.The prime minister’s flight, moreover, is expected to be the first of many direct flights between Tel Aviv and Buenos Aires, as El AL and Argentina’s national carrier, Aerolineas Argentinas, signed a codeshare agreement two weeks ago to open a direct air link between the cities.In an interview from Buenos Aires on Tuesday, Ambassador to Argentina Ilan Sztulman told The Jerusalem Post that since the 2015 election of President Mauricio Macri, there has been a shift in the country’s attitude toward Israel, reflected in the number of official visits, in Argentina’s changing voting pattern toward Israel in international forums, and in a strong personal relationship that has developed between Macri and Netanyahu.Netanyahu’s decision to visit Argentina is a way of “celebrating” that change and showing Israel’s appreciation, Sztulman said.Netanyahu is also scheduled to meet with Paraguay’s president, Horacio Cartes, in Buenos Aires.Both Argentina’s and Paraguay’s presidents are opening the door for Israel in Latin America, Sztulman said. He stressed that Netanyahu’s trip to Argentina – the first ever visit to Latin America by a sitting Israeli prime minister – had a “great deal of diplomatic significance” for Israel’s standing in South and Central America.Netanyahu is scheduled to arrive in Argentina on Monday. He will spend about a day and a half in Buenos Aires, where he will meet with Macri and hold two memorial ceremonies for the victims of the 1992 blast at the Israeli Embassy and the 1994 attack at the AMIA Jewish community center building. Netanyahu, who will be accompanied on his trip by some 30 Israeli businessmen, will also hold a large event with the Jewish community, the largest in Latin America.Contrary to press reports, which said part of the cost of Netanyahu’s trip to Argentina was being picked up by the local Jewish community, the community – as is the case whenever Netanyahu meets Jewish communities abroad – is covering only the cost of that event, said Modi Ephraim, the Foreign Ministry’s deputy director-general for Central and South America.From Buenos Aires, Netanyahu will then travel to Bogota for a few hours, where he will meet with Colombian President Juan Manuel Santos, who has long been a staunch friend of Israel.Asked about the short duration of the stay in Colombia, Ephraim told a press briefing at the Foreign Ministry in Jerusalem that Israel’s relationship with Colombia was a “strategic friendship,” and that it was important to “encourage friends.”Ephraim said Colombia and Santos – in the past as his country’s defense minister and minister of trade, and now as its prime minister – have exhibited “unconditional friendship” toward Israel over the years, and that Netanyahu thought it important to acknowledge this by stopping there, if only for a few hours.From there Netanyahu will fly to Mexico City for a day of meetings which includes meeting with President Enrique Pena Nieto. He will also participate in a large event with the Jewish community.Ephraim characterized Israel’s relations with Mexico as “excellent,” adding that the incident where Netanyahu posted a tweet in January, which was interpreted as support for US President Donald Trump’s controversial decision to build a wall with Mexico and infuriated the Mexican government and Jewish community, was a “misunderstanding” “that is behind us.”From Mexico City Netanyahu will fly on September 15 to New York to address the UN General Assembly and hold an expected meeting with Trump.