Rules were put into place in the midst of the start of the current nine month long wave of violence and revealed under NGO pressure. 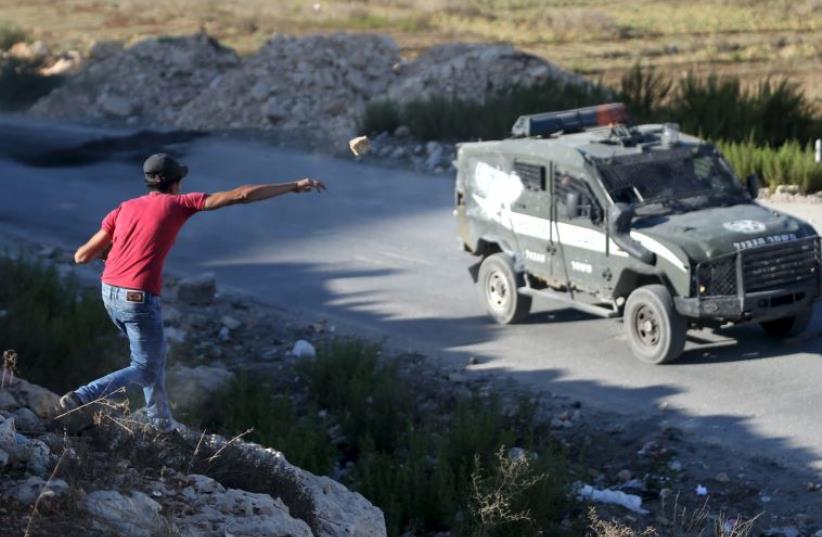 A Palestinian throws a stone at a Border Police vehicle during a protest near Ramallah
(photo credit: REUTERS)
Advertisement
Portions of the police’s classified new rules of engagement, approved by then-attorney- general Yehuda Weinstein in September 2015, have been publicized, the NGO Adalah announced on Monday. The revelation came ofter public pressure from a petition by Adalah to the Lod District Court in its administrative court capacity.A hearing was set for July 17, but the police and the state moved to publicize aspects of its rules of engagement before the hearing, hoping to convince Adalah or the court to dismiss the rest of the petition regarding aspects of the rules that they wish to keep classified.The result is that the police, having refused Adalah’s request to reveal the rules in December, revealed for the first time a range of situations in which its forces are allowed to use live fire.Under the new rules, included in that list are not only attackers armed with guns of firebombs, as at present, but also certain persons using firecrackers and throwing rocks as weapons.The rules say that live fire can be employed only after other procedures have been exhausted or if there is an immediate and serious danger to human life.But Adalah says that the rules went too far and became too loose. It blames the rules for many mistaken shootings of Palestinians, saying the new rules sent the message that police could be easier on the trigger.Adalah did not dispute that throwing rocks at moving vehicles could constitute an immediate and serious danger, yet it strenuously objected to the inclusion of someone using a slingshot as an example of presenting a serious and immediate danger.The NGO said this was a clear example of top law enforcement officials sending the wrong message to rank and file police that they will not be held accountable for shooting Palestinians and Israeli-Arab protesters, even those who do not present a serious and immediate danger.Police spokesman Mickey Rosenfeld disputed this view.He said that all of the rules need to be read in context and that opening fire is never allowed unless the danger is immediate and serious.He added that a slingshot from far away would not be dangerous, just as one close by with a large rock could be, and that the same could even be true with the generally more dangerous firebombs, depending on the distance from which it was being thrown.Some of the rules are still blacked out, with Adalah speculating that these portions related to rules about the police use of the Ruger sniper rifle. In September 2015, Weinstein approved the use of the rifle against certain rock throwers even in east Jerusalem, whereas in the past it was only allowed to be used in the West Bank.The state has noted that the low-caliber Ruger is considered less dangerous than other weapons, but critics have said that introducing live fire into situations for putting down protests would lead to the shooting of protesters who are not dangerous.In the past, B’Tselem slammed use of the Ruger rifle, saying it contradicted the conclusions of the 2000 Or Commission, which opposed the use of live fire of any kind for crowd control, only for instances of imminent danger.The Or Commission, named for former Supreme Court justice Theodor Or, criticized the police’s response to Israeli-Arab rioting in the North during the second intifada as overly harsh.