Barak emerges from the recycling bin

Barak quoted an unknown poll that suggested he could beat Netanyahu.

Former prime minister of Israel Ehud Barak
(photo credit: REUTERS/HERWIG PRAMMER)
Advertisement
Israel is not known for being a world leader in recycling paper or plastic, but the Jewish state is certainly very good at recycling its politicians.Prime ministers David Ben-Gurion, Yitzhak Rabin and Benjamin Netanyahu all returned to the premiership after leaving the post. Other politicians who made high-profile comebacks include Gideon Sa’ar, Moshe Kahlon, Arye Deri, Dan Meridor and Bennie Begin.Ehud Barak’s former bureau chief Eldad Yaniv said it was questionable whether his former boss ever really left politics. He always made a point of remaining in the public eye, Yaniv said, either because it was good for business, it was laying the groundwork for an eventual political comeback, or both.Yaniv recalled Barak approaching a baby outside Jerusalem’s Labor branch during the May 2007 party primary and telling her: “You will vote for me when I am Shimon’s age,” referring to then-vice prime minister Shimon Peres.Barak, 75, might end up keeping the promise he made to that baby – who is now preparing for her bat mitzva. However, he might break the promise made countless times over the past few years to reporters and to the public that he would not make another political comeback.He appeared to indicate his mind was made up when he told Channel 2’s Amnon Abramovich on Wednesday: “I don’t need people to woo me. I’m immodest enough to determine that when it comes to my record – experience, international recognition and intimate awareness of security, diplomatic, and economic problems – I am more ready and qualified to lead Israel than all other candidates around, including Netanyahu, who cannot make decisions.”Newly elected Labor leader Avi Gabbay downplayed Barak’s statement, but he must have watched the interview and cringed.Gabbay has been working so hard to attract attention and shift Labor enough to the Right to have a chance of winning the next election. 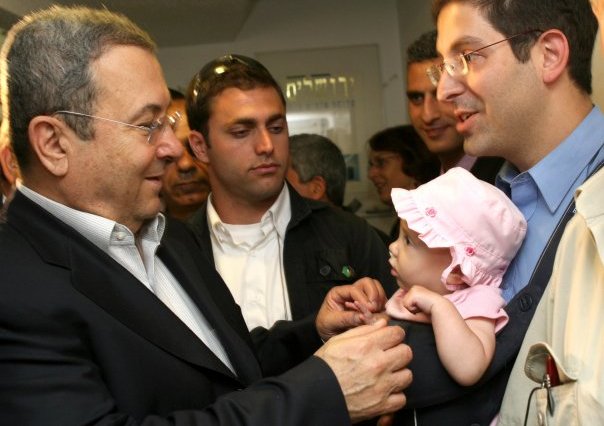 Former Prime Minister Ehud Barak tells baby in 2007 that she will vote for him when he is "Shimon's (Peres) age" (ARIEL JEROZOLIMSKI)
And here comes Barak, who backed him in the July 4 Labor primary, and undermines him.The word in Hebrew that Barak used for ready is most often used in cooking. That was all Gabbay needed: to be told by Barak – at the top of the nightly news – that he was not “cooked” enough to be prime minister.From now on, Gabbay will have a shadow trailing him.Any dip in the polls, and reporters will ask whether Labor might be better off with Barak at the helm, and start new polling.Barak quoted an unknown poll in the interview that suggested he could beat Netanyahu. Every poll published recently has found that to be very far from the truth.It is very likely that Netanyahu has his own polls that find Barak the strongest possible candidate to run against him. It is no wonder that Netanyahu regularly responds to Barak’s tweets but almost never reacts to anything said by his current competitors, Gabbay and Yesh Atid leader Yair Lapid.It is unknown whether Netanyahu still has the influence he once had on the pro-Netanyahu daily Israel Hayom. But Barak’s quote from Channel 2 was the banner headline across the top of Thursday’s paper.Perhaps it is not a coincidence that Barak made his voice heard immediately after Gabbay upset many in the party by saying, “The Left forgot what it means to be Jewish.”The icon of the Israeli Left, Amos Oz, said via his daughter, Fania Oz-Salzberger, that he saw Gabbay’s statement as “spitting in the face of the secular Left.”Oz-Salzberger tweeted that when Gabbay asked to meet her father, Oz said he needed to prepare for the meeting by studying Judaism.Gabbay’s statement may also reignite the weekly Petah Tikva anti-corruption rallies that have started petering out, but which on Saturday night will reach the impressive accomplishment of one solid year of weekly protests. Gabbay came to one of the rallies.But now, Yaniv, who organizes them, might woo his former boss Barak instead.A former environment minister, Gabbay’s top accomplishment during his short tenure was passing the law that requires paying 10 agorot in grocery store chains to get a plastic bag.So Gabbay initiated recycling plastic, but he may ironically end up being the victim of yet another example of Israeli recycling a politician.