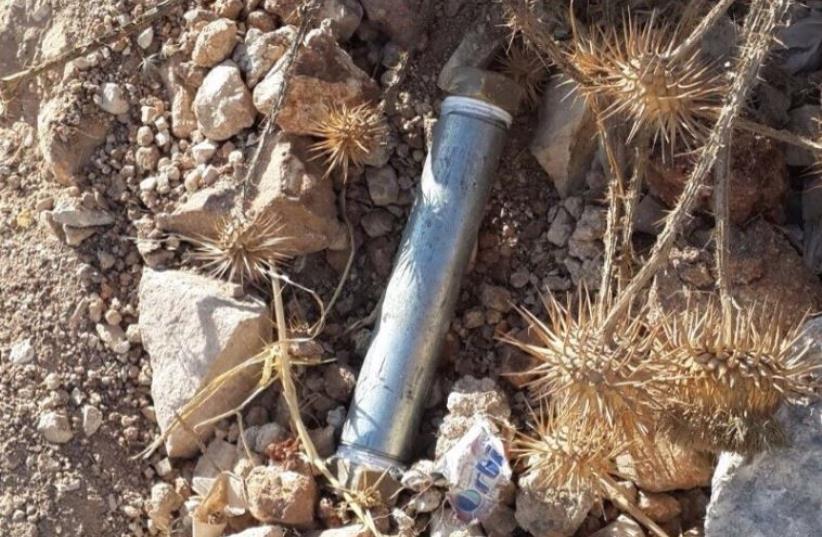 Pipe bomb found near a checkpoint to the east Jerusalem neighborhood of Issawiya, October 16, 2015
(photo credit: POLICE SPOKESPERSON'S UNIT)
Advertisement
An Arab man from the capital’s volatile Shuafat neighborhood was arrested early Wednesday morning after police conducted operations in the area overnight and discovered several pipe bombs in his vehicle.A machine gun and magazines of bullets were also seized at a home during a search by officers after they received intelligence of a potential terrorist attack.According to police spokesman Micky Rosenfeld, the unidentified driver was pulled over during a standard search. The deadly bombs were then found hidden in the glove compartment.“The area was immediately secured and made safe and the driver was arrested on site,” said Rosenfeld, adding that bomb disposal experts were called in to neutralize the explosives.“During the operation, police searched the suspect’s home and seized a number of weapons, magazines and ammunition,” he added.“Police operations continue in order to prevent incidents and attacks from taking place.”The suspect was arraigned at the Jerusalem Magistrate’s Court on Wednesday, where a judge remanded him amid the ongoing investigation.On Tuesday night, police were alerted to a 14-year-old Palestinian boy working at a bakery on Bar-Ilan Street who threatened a group of Jewish teens with a knife.None of the teens were injured during the heated confrontation, police said.Upon arriving at the scene, officers questioned the suspect, who resides in the West Bank, and determined that he was working at the bakery with his father illegally.