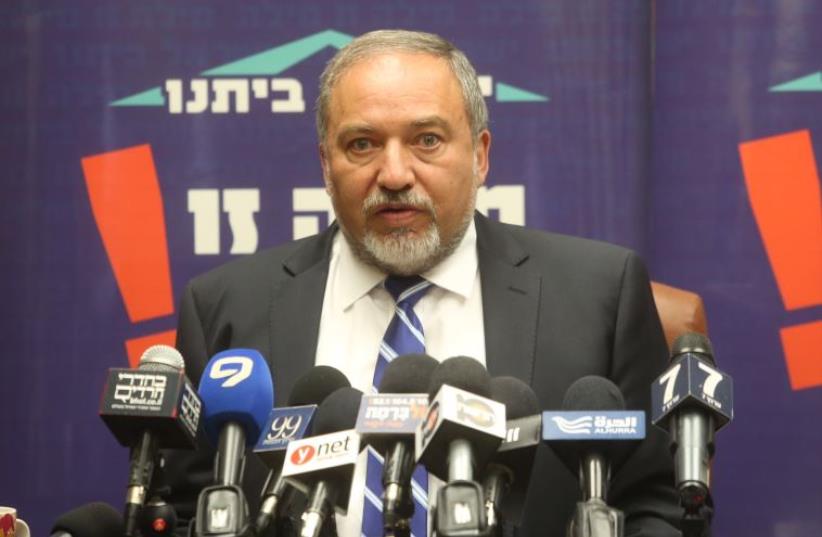 Yisrael Beytenu chief Avigdor Liberman
(photo credit: MARC ISRAEL SELLEM/THE JERUSALEM POST)
Advertisement
Avigdor Liberman called for the demolition of illegal homes in the Palestinian village Sussiya and for increased settlement building in Judea and Samaria when he visited the South Hebron Hills in the West Bank on Wednesday.“The fight against [Palestinian] Sussiya is one of the more important strategic battles that the State of Israel is waging [in the West Bank],” Liberman said.“This struggle is part of a strategic attempt to connect extremist Beduin in the Negev with Palestinians in Hebron.This link will radicalize the area and threaten the State of Israel,” Liberman said.He spoke of the unauthorized shepherding village of 340 people that is located in the South Hebron Hills. The High Court of Justice is in the midst of hearing an appeal by Rabbis for Human Rights that could allow the legalization of the village.Last month the Civil Administration of Judea and Samaria told the residents that some 30 structures are slated for demolition in advance of any final High Court hearing.But since then, it has agreed to hold on destroying the structures, which are tents, tin shacks or small one-story modular structures. Some 21 of the structures were funded by the European Union.The international community, including the US and the EU, has called on Israel to legalize the village and not destroy the structures, half of which house families.But Liberman said it was wrong for the IDF to demolish illegal structures in Jewish settlements, such as the two apartment buildings in Beit El or the house in the Yovel outpost, while at the same time allowing illegal Palestinian structures to remain.Beit El council head Shai Alon and South Hebron Hills regional council head Yochai Damari were with Liberman during his visit.“In a democratic state the law must be equally applied,” Liberman said. “There can’t be a law that applies to Jews, but from which Arabs are exempt,” he said.Liberman also called for more settlement building in the South Hebron Hills, as well as in the settlement blocs, such as Ma’aleh Adumim and Ariel.Separately, MK David Amsalem (Likud), who heads the Knesset’s Interior Committee, visited Givat Ze’ev on Wednesday to protest the High Court of Justice ruling that ordered the demolition of a synagogue there.