Simon Wiesenthal Center rabbi: “It’s really a tally of a White House effort to get votes for a Jewish homeland.” 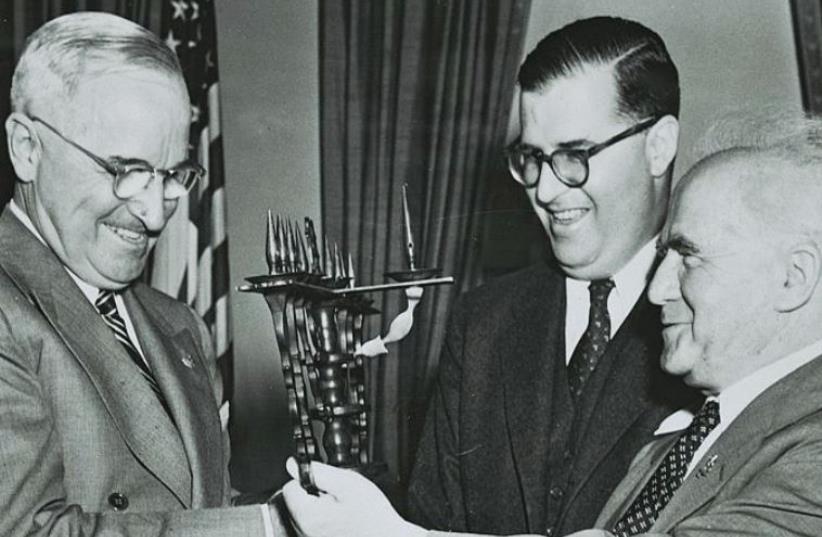 Abba Eban and prime minister David Ben-Gurion visiting US president Harry Truman, 1951.
(photo credit: FRITZ COHEN)
Advertisement
WASHINGTON – For 70 years, historians have thoroughly documented the unlikely events that led to Israel’s birth, including US president Harry Truman’s support for the partition of Palestine into Jewish and Arab states.But a document recently uncovered in the archives of the former president’s library offers new insight into his fervor for the cause.The Jerusalem Post obtained a handwritten note on White House letterhead that an archivist at the Truman Library said was drafted by his press secretary more than a year before the Declaration of the Establishment of the State of Israel on May 14, 1948. It details a concerted effort by the US administration to whip up votes at the United Nations in support of the partition.The document features notes from a cabinet meeting at which Truman, according to the library, was offered a tally of support for a vote that would ultimately take place in November 1947. “Palestine votes look a little better,” the top of the note reads. “We have been in touch with Liberian minister to try to get the government’s instructions changed to support us,” it says. “I think we have Haiti. We may get Philippines out of no into abstention or, with luck, yes.”“Cuba still won’t play,” it continues. “Greece is uncertain but has the excuse of the Balkan communism votes trade with Muslims.”The vote was ultimately successful, with 33 votes in favor, 13 opposed and 10 abstentions. Liberia, Haiti and the Philippines voted for the resolution, while Cuba and Greece voted against.While historians have documented a campaign by US senators who were on influential foreign and appropriations committees to pressure countries to support the resolution, there has been less evidence of Truman’s personal effort.The note was discovered by researchers from the Simon Wiesenthal Center who were preparing a historical exhibit ahead of Israel’s 70th anniversary celebrations.“This means Truman was an activist, securing votes despite great opposition from several members of his own cabinet, including George Marshall,” said Rabbi Marvin Hier of the center, referring to Truman’s secretary of state. “It’s really a tally of a White House effort to get votes for a Jewish homeland.”