MK Elazar Stern calls the bill "a middle finger in our faces." 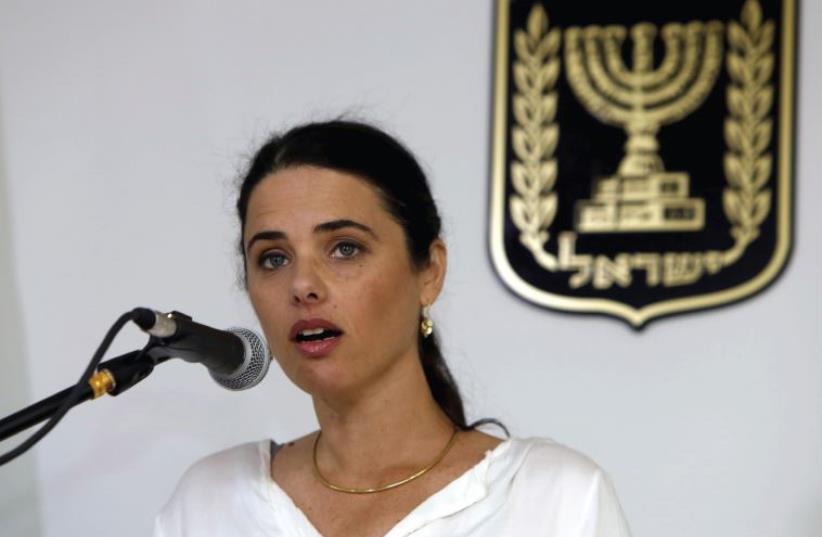 Justice Minister Ayelet Shaked
(photo credit: REUTERS)
Advertisement
Controversial legislation requiring increased transparency for NGOs that receive most of their funding from foreign governments received approval from the Knesset Constitution, Law and Justice Committee Monday and is likely to go to a vote next week.The bill, a combination of a Justice Ministry proposal and initiatives by MKs Bezalel Smotrich (Bayit Yehudi) and Robert Ilatov (Yisrael Beytenu), states that any non-profit organization that receives more than half of its funding from a foreign political entity must write as much on any publication or letter to elected officials or civil servants.In addition, a list of the NGOs falling under the bill’s purview, as well as the countries from which they received donations, must be posted on the Non-Profit Registrar’s website.Earlier this month, The Jerusalem Post revealed the list the Justice Ministry compiled, which includes 27 organizations, 25 of which are left-wing, a source of much controversy.Any organization that violates the law could face a fine of up to NIS 29,200.Monday was Shaked’s turn to answer questions in the Knesset’s new weekly Questions Hour for ministers, and she was asked more than once by Zionist Union MKs Ksenia Svetlova and Stav Shaffir about the NGO bill.Shaked compared the activity the bill seeks to stop to a situation in which the Israeli government funded an organization that campaigned to have the UK or other countries leave the EU, saying such a thing would be “unacceptable.”Ahead of the referendum in the UK over leaving the EU, Regavim, an organization that Smotrich headed before taking elected office, launched a campaign in favor of what has been nicknamed “Brexit,” arguing that a weaker EU is better for Israel. Regavim combats illegal use of Israeli land, in some cases by Palestinians funded by the EU. The NGO has received payment from local authorities in the West Bank for its services.Regavim international director Josh Hasten said Regavim “does not and has not received funding from the Israeli government,” rather it has “billed specific municipalities for consultation fees on short-term research projects in their areas.”When confronted with the case of Regavim, Shaked’s spokesman said she had no comment. During the Questions Hour, though, Shaked said that Israel funding an NGO in its own country differs from foreign governments funding organizations in Israel.Earlier Monday, the Constitution, Law and Justice Committee authorized the bill after weeks of raucous debate.MK Elazar Stern (Yesh Atid) called the bill “a middle finger in our faces,” saying that it’s making a statement, but not doing much. MK Yael German, also of Yesh Atid, said the bill is an example of “shaming” of organizations that criticize the government.Referring to recent comments by former prime and defense minister Ehud Barak, German said: “Not long ago, someone said there are seeds of fascism in our country, and that’s what this law is, seeds of fascism toward human rights organizations.”German also argued that the bill should apply to private donors from foreign countries, not just foreign governments.Meretz MK Michal Rosin called the bill “persecution by transparency.”In the coalition, MK Bennie Begin (Likud) said diplomatic means would be a better way to deal with the problem, saying that it worked with the Netherlands, Great Britain and Switzerland.“This path is not effective and could lead to the opposite of what its proposers hope for,” Begin added.Similarly, watchdog organization and research institute NGO Monitor noted that in recent weeks, a number of European parliaments began debating their governments’ funding for Israeli organizations, and said the NGO bill could be an obstacle to progress in that area.“We believe that these developments provide an opportunity to open a formal dialogue between members of the Israeli Knesset and European parliaments in order to negotiate guidelines on this issue,” NGO Monitor stated. “The current NGO legislation could prevent such negotiations.”Israel Democracy Institute researcher Dr. Amir Fuchs criticized the bill, saying there is nothing similar to it in the Western world.“The unequal demands from organizations funded by private donors and those funded by government organizations like the UN and EU comes from a need a few MKs have to take revenge on certain organizations and get some headlines, and that’s it,” Fuchs posited.Constitution Committee chairman Nissan Slomiansky (Bayit Yehudi) pointed out that the bill is different from how it was originally proposed.For example, Smotrich’s version of the bill would have required representatives of foreign-government-funded NGOs to wear brightly colored named tags while in the Knesset, like lobbyists do, but that clause was removed.“In any place that there was a doubt if the bill would harm [rights], we changed the wording,” Slomiansky said. “Even [opposition members] admit that there is not much left to it.”The committee approved the bill with seven in favor and six opposed.