Herzog calls for committee to be formed to investigate "Netanyahu's decision making process when it comes to national security." 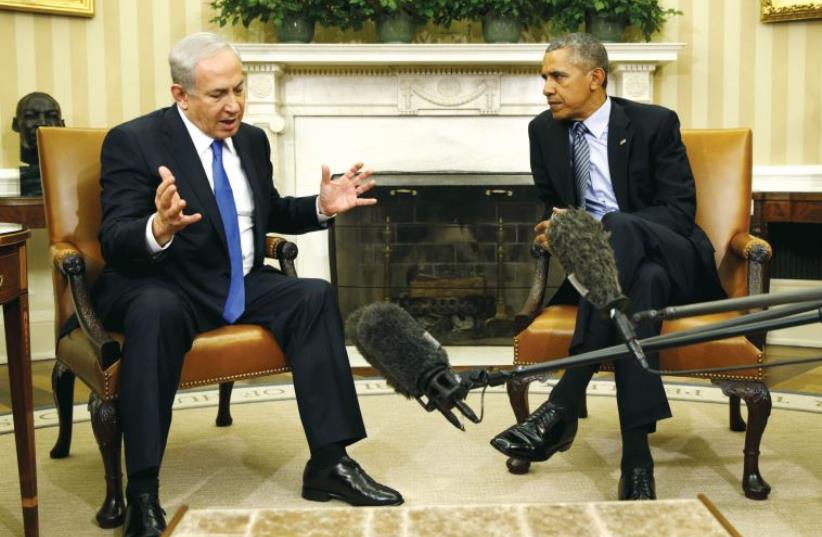 PM Netanyahu and President Barack Obama meet in the White House last week
(photo credit: REUTERS)
Advertisement
Prime Minister Benjamin Netanyahu’s ego is to blame for the Obama administration opposing increasing defense aid for Israel’s missile defense program, opposition leader Isaac Herzog said on Wednesday.On Tuesday, the White House released a statement opposing a call by US lawmakers to increase funding for Israel’s missile defense by $455 million above the 2017 fiscal year budget request. Netanyahu’s office denied that there was a rift with the Obama administration on the issue, but opposition MKs were skeptical.“This peculiar fight with our most important ally has erupted and now the citizens of Sderot and Kiryat Shmona will pay the price for Netanyahu’s arrogance,” Herzog said in reference to border communities that have hit by many rockets from the Gaza Strip and Lebanon, respectively.Herzog called for a committee to be formed to investigate Netanyahu’s decision-making process when it comes to national security.Yesh Atid chairman Yair Lapid expressed concern saying “The White House’s message this morning underlines the need to reach an agreement on an aid package as soon as possible, while securing our security interests.”Lapid stressed the need to “rehabilitate” the ties with Washington “without waiting for the next administration.”Zionist Union MK Nachman Shai said Netanyahu was mistaken if he believed President Barack Obama had a blank check for Israel.“There is a limit to how much we can bargain and argue and how much we can jeopardize our relationship with the US and sacrifice American Jews on the altar of funding,” Shai said.By contrast, Kulanu MK Michael Oren indicated on Wednesday that Congress, which supports the increased aid package, represented the American people’s interests more accurately than the Obama administration does.“Congress represents the will of the American people, and it transcends the administration of this president or any other,” said Oren, who is a former ambassador to the US.Oren’s veiled criticism of the Obama administration’s decision was coupled with praise for congressional efforts to aid Israel.“While we appreciate the White House’s willingness to sign a security agreement with us for the next decade, Congress’s right and ability to strengthen Israel’s security must be respected and upheld,” Oren said.