Smotrich to ‘Post’: I call on all Israelis to come out and fight 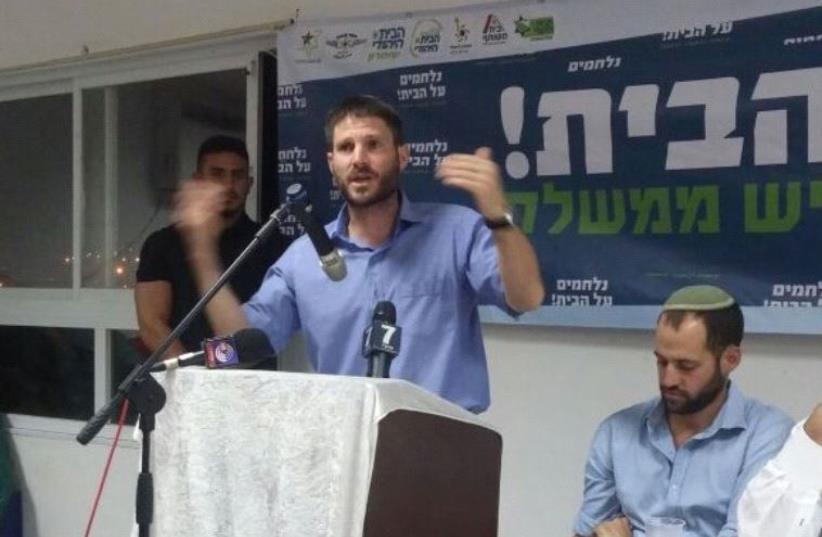 Bayit Yehudi MK Bezalel Smotrich
(photo credit: BAYIT YEHUDI)
Advertisement
The sudden order to evacuate the residents of Amona is unjust, Bayit Yehudi MK Bezalel Smotrich told The Jerusalem Post on Tuesday.“There is no good outcome from displacing a flourishing Jewish settlement in the Land of Israel. There is no justification for that whatsoever,” he said.Smotrich criticized the IDF for handing out the order without waiting for the Supreme Court ruling. “I do not understand why they are rushing. Why are they putting so much pressure on the system?” Smotrich called on the wider public to attend the demonstrations in Amona and support their struggle. “I call on all people to join the residents in their cry against this harsh injustice. When something this big happens, you cannot expect that we will keep quiet. It is our right, and also our obligation, to shout out against this move,” he said, stressing that he opposes the use of violence.Smotrich added that he planned to take part in the protest. “The people of Israel should see that we love our land, so we should all join them there.”According to Smotrich, the Supreme Court is imposing the evacuation on the government against its will, but this is not the final word.“We [Bayit Yehudi] are doing whatever we can to stop the move. One of the things we have done is the ‘settlements bill’ and it is thanks to the residents of Amona. This is the way we make sure that this is ‘the last Amona’ [the evacuation of residents from a settlement in the West Bank]. But if the evacuation will happen eventually, we will do whatever we can to resettle the residents back on the Amona ridge.”Agriculture Minister Uri Ariel also expressed his discontent with the IDF initiative. “The IDF order to the Amona residents is outrageous,” he said. “The judges of the Supreme Court are supposed to decide, and doing it before that is not helping to ease the situation.”Meanwhile, lawmakers from the Left called on the residents of Amona to evacuate the settlement peacefully, despite the difficulties involved.“Do it of your own will. There is a limit on how long you can stretch the court ruling and drag [out] this story,” said Zionist Union MK Eitan Broshi. “Don’t you dare hurt a soldier or a policeman, although you are in pain and disappointed.”Zionist Union MK Ayelet Nahmias-Verbin blamed the politicians for the situation and reiterated the call not to use violence. “We cannot belittle the feelings of the residents. This is a hard time for them and they are uncertain about their future. My heart goes [out] to those who were misled by cynical and opportunist politicians,” she said.“We are a state of law, and our power derives from obeying the law. We cannot allow the images from 11 years ago to happen again, when soldiers and policemen were hurt. Honor the court ruling – we have no other country,” she added.