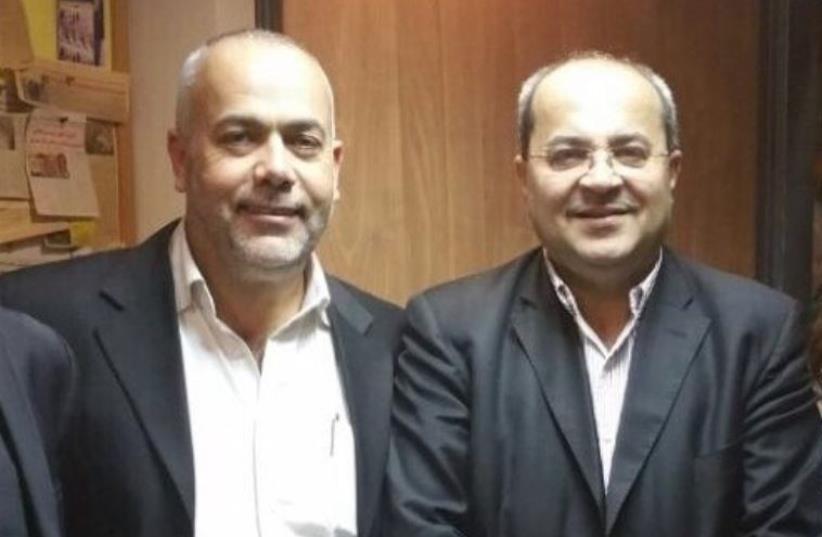 Ta’al Party Chairman Ahmad Tibi (Right) and fellow party MK Osama Sa’adi (Left)
(photo credit: Courtesy)
Advertisement
Ta’al Party chairman MK Ahmad Tibi and fellow party MK Osama Sa’adi met with Interior Minister Silvan Shalom on Wednesday to facilitate building in the Arab sector, Israeli Arab media reported.The meeting was meant to deal with planning problems in Arab villages, including house demolitions. They asked the government to find a quick solution to decrease bureaucratic obstacles to rapid construction within the four Arab towns of Taiba, Abu Ghosh, Tur’an and Fureidis.The Ta’al MKs complained about the housing crisis and house demolitions, particularly the recent destruction in the northern Arab village of Kafr Kana, which was widely reported in the Israeli Arab media.Prior to the last general election, some within the Arab sector criticized Arab politicians for not paying enough attention to local needs and spending too much time on greater Palestinian issues and the conflict with Israel.In response to this, Tibi told The Jerusalem Post, “In the past, I passed many laws and invested efforts to improve civil matters and in this Knesset I will continue. The claim that Arabs do not deal with domestic issues is false,” he said, adding that he just dealt with the Interior and Health ministries.The housing issue is one of the most important issues for the Arab public.Last month the Joint List sent a letter to the Finance Ministry outlining recommendations to deal with what it calls an Arab housing shortage.The “housing shortage in Arab society has reached frightening proportions,” as tens of thousands of families are in immediate need of apartments or land to build, the letter said. It proposed that two main preliminary steps be taken: speeding up processes and bypassing obstructive regulations; and “a total freeze on the carrying out of house demolitions in Arab towns.”The majority of these homes, says the letter, could be legalized in a short period by using “policy instruments.”In a separate meeting that Tibi held on Wednesday with Deputy Health Minister MK Ya’acov Litzman, he obtained a license for an MRI machine and NIS 3 million in aid for the Holy Family Hospital of Nazareth, Tibi said. This is a long-term demand that finally was met, he said.