Slovakia’s president in Israel ‘to learn and to share’ 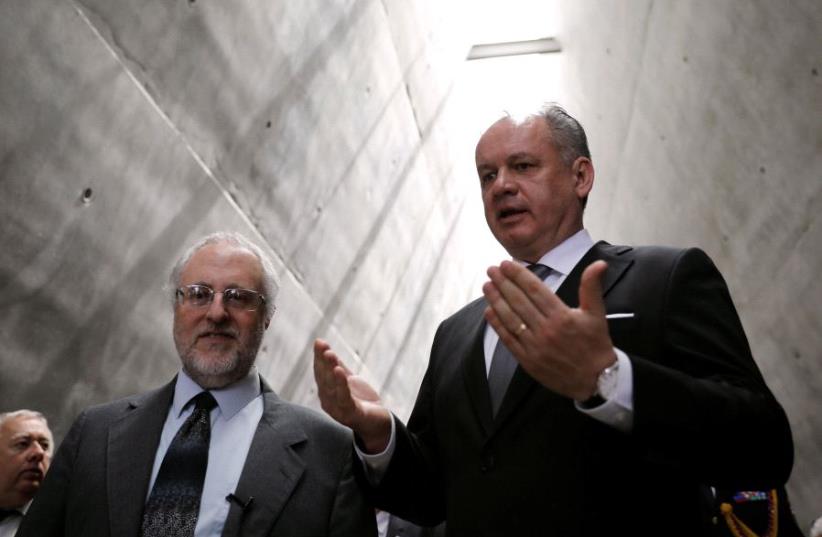 Slovakia's President Andrej Kiska (R) walks during a visit to Yad Vashem's Holocaust History Museum in Jerusalem
(photo credit: REUTERS)
Advertisement
Andrej Kiska, on the first ever visit to Israel by a Slovakian president, said at a welcome reception hosted by President Reuven Rivlin on Wednesday that he and his delegation had come “to learn and to share.”The delegation includes Foreign Minister Miroslav Lajcak, academics and business people.Kiska had already been in the country for two days before meeting with Rivlin whom he invited to come on a state visit to Slovakia. Like his son who had preceded him to Israel, the Slovakian president was greatly impressed by Israel’s technology.He arrived in Israel on Monday, going first to Haifa where he toured the Technion-Israel Institute of Technology and Rambam Medical Center.At the Technion he witnessed the signing of a bilateral space research cooperation agreement, and at Rambam he not only toured the facilities that are geared to cope with patients in war time, but also exchanged pleasantries with patients in different wards, including the children’s ward.Kiska, who has an engineering degree in microelectronics, is particularly interested in Israel’s technology, especially cyber in which Slovakia also has expertise, and he believes that the two countries can have close cooperation in this field.Before entering politics, Kiska worked at a variety of professions and started several businesses, becoming a multimillionaire and a philanthropist in the process In 2006, together with a friend, he founded Good Angel, an NGO that helps families with children who have found themselves in financial distress due to a serious illness. To begin the financing of this organization, he donated €1 million of his own money, and has given generously to other charities as well.He was elected president in March 2014, and is the first president of Slovakia without a Communist background.He has been active and outspoken on matters of extremism, incitement to hatred, fascism and antisemitism.At the welcome ceremony in Jerusalem, he said these elements must never be allowed to pervade Europe again.In January 2016, together with Prime Minister Robert Fico, Kiska opened his country’s first Holocaust museum at the site of the former Nazi labor and concentration camp in the western town of Sered. Just before coming to Israel, Kiska attended a ceremony and the affixing of a plaque to mark the 75th anniversary of the transport of Slovakian Jews to Auschwitz and other death camps. Altogether 70,000 Slovakian Jews were sent to concentration and death camps. Kiska mentioned this figure again in Jerusalem, and following his discussions with Rivlin, went to Yad Vashem.One of the things he intended to do while in Israel, he said, was to give posthumous recognition to a Slovakian Jew, Aron Grunhut, who in 1939 saved more than 1,300 people by sending them to the future State of Israel. During the Holocaust, he joined the resistance and later migrated to Israel, where some of his family live to this day.Alluding to the period when Slovakia was part of Czechoslovakia, which provided arms for Israel during the War of Independence, Rivlin said Kiska’s visit was appreciated as part of a longer history.Rivlin also referred to the good work done by Slovakia during its presidency last year of the Council of the European Union and praised Kiska for his strong stand against extremism and antisemitism.He also told him that Israel remains committed to finding a solution to its conflict with the Palestinians.Kiska’s first words from the podium were Shalom and Boker Tov (Good morning). He said that in the brief period that he had been in Israel, he found it “inspirational in many ways” and emphasized that there is great potential for cooperation on many levels between the two countries.Kiska is due to meet with Prime Minister Benjamin Netanyahu on Thursday.