With injuries, personnel problems, and poor play, yellow-and-blue’s season spiraling out of control.

Let’s face it, Maccabi Tel Aviv’s 2022/23 EuroLeague season is heading toward being a disaster.

There is no way around that fact and there’s no sense in trying to sugarcoat it. The yellow-and-blue have played way below expectations and the most concerning part is that it seems to be regressing as the weeks and games go by.With a third of the season now in the books, Oded Katash’s team is 5-6, one game under .500 while only having won once in the last six games. Heading into Thursday night’s clash with Valencia, there’s no question that Maccabi is in trouble.It’s clear that at this point of the season, the yellow-and-blue should be coming together more like a team rather than coming apart at the seams, which has been the case over the past week, especially with the Darrun Hilliard suspension for unspecified reasons.While Hilliard has now been reinstated, Katash has to hope that any damage within the team can be overcome, and the fact that many EuroLeague players and former stars publicly came to his defense most probably did not help matters.
JALEN ADAMS demonstrated his potential to Israeli basketball fans last season with Hapoel Jerusalem. Now, the 26-year-old guard (3) is playing for Maccabi Tel Aviv. (credit: Dov Halickman)
In the front court, big man Alex Poythress has played his last game of the campaign as he will need to undergo surgery on his hand which will keep him off the court for 4-6 months.Add into the mix an Israeli league loss against Hapoel Jerusalem – at home nonetheless – and the pressure is mounting around the club with a tough schedule ahead in continental action.A blowout victory over Hapoel Beersheba in domestic play is nice, but it’s not really a litmus test as to where Maccabi needs to be. With a trip to Italy for Milano and Bologna, a jaunt to Germany for ALBA Berlin and home dates versus surging Valencia and two-time defending champion Anadolu EFES awaiting, this will most certainly be a pivotal month for both Katash and the team.To get a better sense as to why Maccabi has struggled mightily, one must dive into some of the statistics.The team defense has somehow sunk to the bottom of the Dead Sea over the past half-dozen games. After holding opponents to 76.4 points over the course of the first five games of the season, which led to a 4-1 record, Maccabi has given up 91.5 points per game over the past six contests, more than 15 (!) points per game than they had earlier in the season.

Striving for success in the EuroLeague

In terms of fouls, Maccabi Tel Aviv is also in trouble having had issues getting to the charity stripe as it sits in 17th place with only 207 fouls drawn.The yellow-and-blue is 12th overall or 16.3 per game in free-throws attempted, but it still needs to see a marked improvement on that number as Monaco is well over 20 a game in first with 22.5.In today’s game, it’s also crucial to be able to play beyond the arc and hit three-pointers at a decent clip. Unfortunately, Katash’s charges are struggling in this area as well, shooting only 23.6 triples per game, good for 12th place, while only hitting 34.6% of them for 14th.To add insult to injury, over the last six games Maccabi has allowed opponents the opportunity to go 66-of-156 for 42% from deep whereas the first five games they were able to protect the three-point line to the tune of 42-of-126 for 33%. Those numbers are just not going to cut it and Katash will need to improve his exterior defense if the team has any designs to compete with the big boys.One of the more disturbing stats is the lack of defensive rebounding, which sees Maccabi in 16th place, pulling down 21.5 boards per game. On the offensive glass, the yellow-and-blue are first, checking in with 11.7, for an overall average of 33.2, good for ninth of 18 teams. 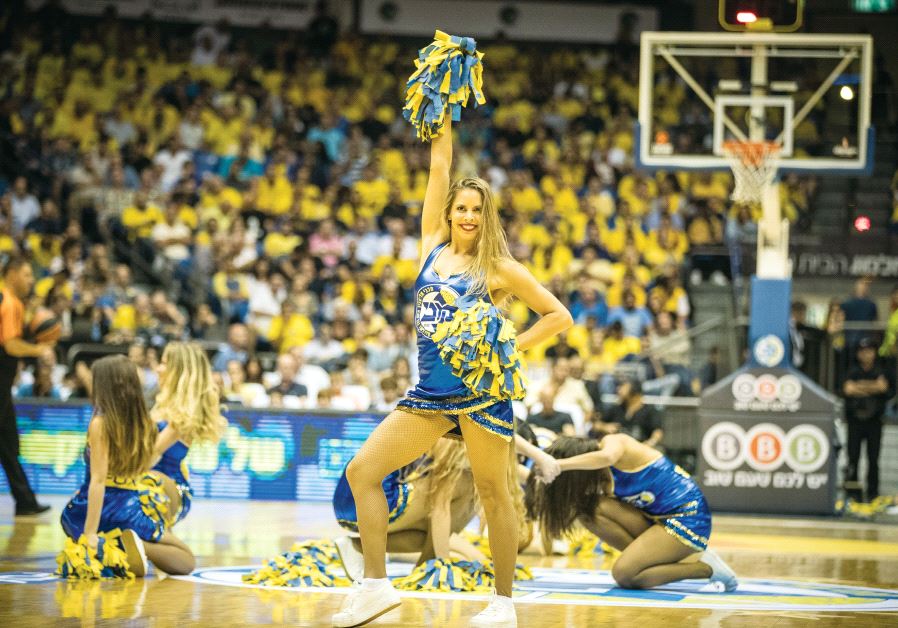 Shir Davidai, captain of the cheerleaders of Maccabi Tel Aviv’s men’s basketball team (credit: YANIV BEN SIMON)
If one digs even deeper into the advanced statistics on the boards, the situation is even worse for big men Josh Nebo and Poythress. Looking at defensive rebound percentage, which is the estimated percentage of available defensive rebounds obtained while on court, the pair sit 89th (13.2%) and 162nd (8.5%), respectively.

What has happened to the bigs? Poythress will now be on the shelf while Nebo admitted that he needs to be more assertive on the defensive end, it’s obviously not all on them and Katash has to find a way to work to Nebo and a yet-to-be-signed big man’s strengths.Yes, Maccabi leads the league in blocked shots with four players in the top 25 including, not only Poythress and Nebo but also Bonzie Colson and Roman Sorkin as they average 4.5 blocks per game. But while the blocked shots are a positive, the overall defense has suffered and suffered mightily.If we look at the guards Lorenzo Brown and Wade Baldwin on the offensive side of the ball, the assist-to-turnover ratio also takes a hit, as well as the former, went from 2.05 to 1.45 while the latter shot down from 2.56 to 1.69.In order for Maccabi Tel Aviv to make an impact this season in Europe and find its way back to the postseason, it not only needs to get the house in order but also needs to find a way to improve on the areas listed above.In an age where statistics are used across the board in sports of all types, Katash needs to use them as a blueprint in order to wade through the waters and make the right moves to get Maccabi back onto the right track.