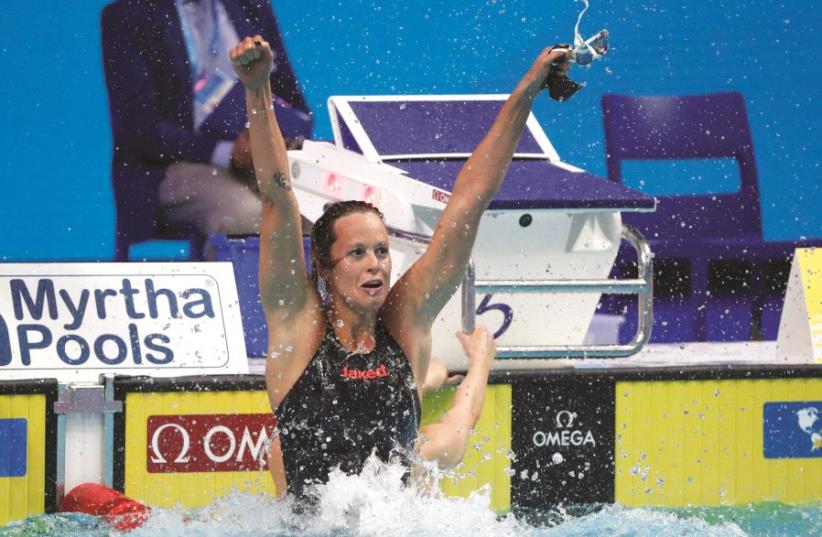 Italy's Federica Pellegrini after a win
(photo credit: REUTERS)
Advertisement
Yakov Toumarkin advanced to his second semifinal at the world swimming championships in Budapest, Hungary on Wednesday, but once more came up short in his attempt to reach a final.The 25-year-old finished the semis in the 16th and last place in a time of 1:59.98 minutes, 49 hundredths of a second slower than the result which saw him progress from the morning heats.Toumarkin, who came within 17 hundredths of a second of a place in the 100m backstroke final on Monday, will compete in the 200m back heats on Thursday, an event in which he reached the Olympic final at London 2012.Meanwhile, Italy’s Federica Pellegrini became the first swimmer to win seven medals in a single event at the world championships after a stunning victory in the women’s 200 meters freestyle final on Wednesday.On a glittering night for Italy, Gabriele Detti won his first world title in a close finish in the men’s 800m freestyle, an emotional Chad le Clos of South Africa took gold in the men’s 200m butterfly and Britain’s Adam Peaty secured a breaststroke double with 50m gold.Pellegrini last won a world title at the 2011 championships, but the determined Italian rolled back the years to clock one minute 54.73 seconds.The oldest in the field at 28, Pellegrini stormed back from fourth at the final turn to take gold ahead of Katie Ledecky of America and Australia’s Olympic bronze medalist Emma McKeon, who had led until the 150m mark.In the process Pellegrini, who broke 10 world records before she was 21, scuppered the hopes of silver medalist Ledecky becoming only the second swimmer, after Michael Phelps, to win at least two world titles in four different individual events.The final was given an extra dimension thanks to the inclusion of Katinka Hosszu, who finished seventh in a less favored event for the Hungarian.The raucous atmosphere inside the Duna Arena had barely subsided by the time her compatriot Lazslo Cseh stepped up to his center lane blocks for the men’s 200m butterfly.The fastest qualifier, however, could not replicate his form of the heats as Le Clos regained the title he won at the 2013 championships.Cseh held on for silver ahead of Japan’s Daiya Seto.Britain’s Peaty again left the field trailing in the 50m as he secured a breaststroke double following 100m gold.Peaty, 22, was denied a third successive world record time as he clocked 25.99 seconds.Joao Gomes of Brazil pipped Cameron van der Burgh into silver.Detti’s win was perhaps the most spectacular given that three swimmers were separated by just 0.09 seconds at the 750m mark.Detti stormed home in a European record time of seven minutes 40.77 seconds ahead of Poland’s Wojciech Wojdak and Italy’s Gregorio Paltrinieri.In the mixed 4x100m medley relay, the United States set their second world record of the day to take gold. Australia and Canada won silver and bronze respectively to end another frenetic evening.