Sahar’s spot kick in 95th minute snatches draw with Moldova ahead of WC qualifier vs Albania. 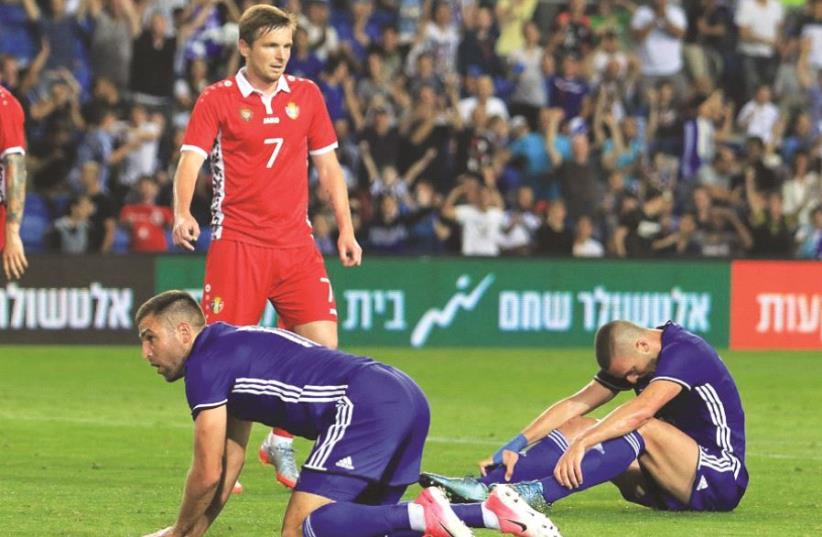 Israel national team strikers Ben Sahar (right) and Itay Shechter experienced a frustrating night in Netanya on Tuesday, with Sahar only finding the back of the net in stoppage-time in a disappointing 1-1 draw against Moldova.
(photo credit: ERAN LUF)
Advertisement
The Israel national team received a wake-up call ahead of next week’s 2018 World Cup qualifier against Albania, requiring a stoppage-time penalty in Netanya on Tuesday to draw 1-1 with Moldova, one of Europe’s weakest sides.Radu Ginsari made the most of Israel’s lax performance to give Moldova the lead in the 50th minute of the international friendly. Israel was on the way to joining San Marino and Andorra as the only teams to lose to Moldova over the past three years.But Ben Sahar’s accurate penalty in the 95th minute after debutant Idan Vered was tripped in the box spared the blue-and-white’s blushes, although gave coach Elisha Levy little reason for optimism.“Clearly this won’t be good enough against Albania, but we know we can play a lot better,” said Levy. “This was a practice match and we needed it after a long time without a game. There were some positives and there were a lot of negatives. But this match wasn’t important. What is important is the qualifier against Albania.”Israel hosts Albania in Haifa on Sunday, aiming to take a significant step towards securing third place in 2018 World Cup qualifying Group G.Despite the 4-1 defeat in Spain in its most recent qualifier in March, Israel is still well placed to finish in third. Spain is top of the group with 13 points from five games, ahead of Italy on goal difference.Israel is third on nine points, three ahead of Albania.Only the winners of each group will qualify automatically for Russia 2018, while the eight best runners-up will advance to home-and-away playoffs.A third-place finish could help Israel improve its seeding ahead of Euro 2020 qualifying.While some players preferred to avoid a call-up to the national team at the end of a grueling season, veterans Yossi Benayoun and Tal Ben-Haim seemed almost as excited as those players making their debuts on Tuesday.The 37-year-old Benayoun extended his record with a 98th appearance for Israel, coming on as a substitute in the 61st minute. He had played for the blue-and-white only once in the past three years, in a friendly match against Croatia in March 2016.The 35-year-old Ben-Haim, who is ranked third all-time with 92 appearances, started and played the entire first half before being substituted. It was his first appearance for Israel since an international friendly against Honduras in June 2014.“It is always fun to return to the national team,” said Benayoun. “I waited for this moment for a long time.I never gave up on my international career. I always said that I will do everything to play for the national team. I’m happy Elisha gave me the chance to return to the blue-and-white.”Benayoun didn’t seem too concerned with the side’s poor performance.“We will have a lot more adrenaline against Albania and I’m certain we will play a lot better,” explained Benayoun.“There was a sleepy atmosphere from the start and there are days like this.I’m happy that we at least managed to level the score and I think that we would have won had there been a few more minutes.”Benayoun and Ben-Haim’s renaissance at Maccabi Tel Aviv this past season, combined with a long list of injuries, resulted in their call-up by Levy, who was pleased with their displays and will consider using the veterans once more on Sunday.“Ben-Haim played well in the first half and Yossi came on and showed his experience. I was pleased with them and we will use them in the future,” said Levy. “We will correct our mistakes before we face Albania. We have enough time until Sunday. We will do everything to ensure we play better against Albania.”