Paralympics come to a close at the Maracana; Tokyo 2020 within sight. 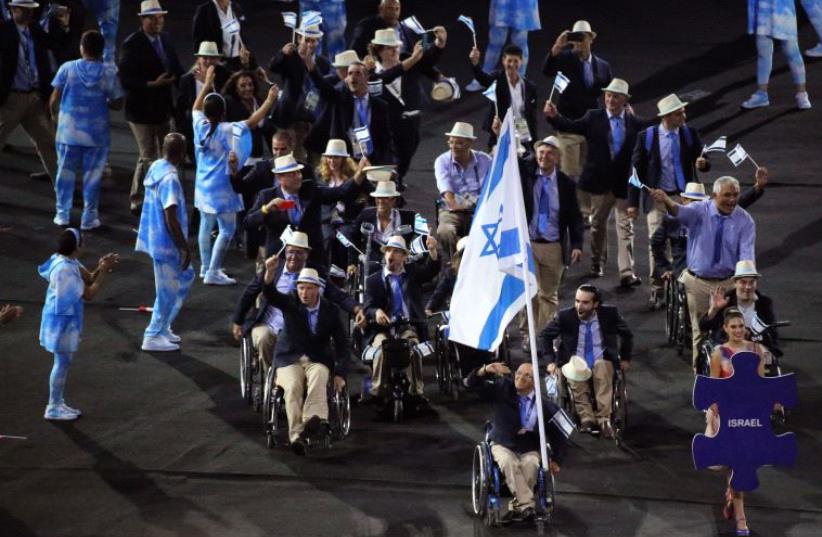 Israel's 2016 Paralympic team at the game's Opening Ceremony in Rio de Janeiro
(photo credit: REUTERS)
Advertisement
The Rio Paralympics came to an end late Sunday night with the closing ceremony at the Maracana, with rower Moran Samuel being honored with carrying the Israel flag into the stadium.Samuel won the first of the Israeli delegation’s three medals in Rio, all of them bronze. Samuel claimed her first Paralympic medal in Rio, while shooter Doron Shaziri and swimmer Inbal Pezaro further cemented their place as two of Israel’s greatest Paralympians.Shaziri extended his remarkable run of winning at least one medal in every Paralympics since 1996, taking a bronze medal in the men’s 50-meter rifle three positions final. The 49-year-old, who had his left leg amputated below the knee after stepping on a land mine during his army service in Lebanon in 1987, has won medals in six consecutive games, taking two silver medals in Atlanta 1996, a bronze in Sydney 2000, two bronzes in Athens 2004, a silver in Beijing 2008 and a silver in London 2012.Pezaro won her ninth Paralympic medal in Rio, finishing third in the women’s SM5 200m individual medley final. Pezaro, who reached the final in all five of her individual events in Rio, won three medals in each of the previous two Paralympics, taking three bronzes in 2012 and three silvers four years earlier, while also claiming a silver and a bronze in Athens 2004.She was hoping to win her second medal in Rio on Saturday night, but could only manage a fifth-place finish in the women’s S5 100m freestyle final, clocking a time of 1:24.04 minutes, 83 hundredths of a second from third place.“This isn’t the way it should have been, from the first moment to the very last” said a disappointed Pezaro. “There were athletes on the Israeli delegation who performed so much better than me and managed to excel, which is the name of the game in these competitions.The bottom line is that I didn’t succeed.”Pezaro said she is unsure whether she will compete in Tokyo 2020.“It doesn’t matter what I say about my future because at the last Paralympics I said that those would be my last games and here I am in Rio,” she explained The final Israeli to compete in Rio on Sunday was marathon runner Gadi Yarkoni.He ended the T11/12 race in ninth place in a time of 3:05.29 hours but was later disqualified as his guide runner Yosef Gezachw ran too far ahead of him.Meanwhile, Iranian cyclist Sarafraz Bahman Golbarnezhad died on Saturday after crashing in the C4-5 event at the Paralympics, the first such death at the games since they began in 1960, the International Paralympic Committee (IPC) has said.“The IPC confirm that Golbarnezhad, 48, was involved in a crash at around 1040 on the first section of the Grumari loop, a mountainous stretch of the course,” the International Paralympic Committee said.“The athlete received treatment at the scene and was in the process of being taken to the athlete hospital when he suffered a cardiac arrest.“The ambulance diverted to the nearby Unimed Rio Hospital in Barra da Tijuca where he passed away soon after arrival.”An investigation into the accident has been launched.“As far as we’re aware it is the first fatal accident in a Paralympics,” the IPC’s director of communications Craig Spence told Reuters in an emailed response.It was Golbarnezhad’s second race in Rio. He finished 14th in the C4 time trial on Wednesday.The cyclist took up the sport in 2002 and also participated at the London 2012 Paralympics.“He was an exemplary Paralympic sportsman who, with love and energy, tried his best to promote the name of Iran and to make all of us proud and at the end he gave his life for this,” said Golbarnezhad’s national Paralympic Committee.“All members of the Iranian cultural and sports camp here express condolences to his family and the Iranian nation. The name of Bahman Golbarnezhad will be inscribed in the proud history of Iranian Paralympics.”The Iranian flag was lowered to halfmast in the Athletes Village.The Paralympic flag will also be flown at half-mast in the village and at the Rio centro venue where Iran played Bosnia in the sitting volleyball final on Sunday.“This is truly heart-breaking news and the thoughts and condolences of the whole Paralympic movement are with Bahman’s family, friends and team mates as well as the whole of the National Paralympic Committee of Iran,” said IPC president Philip Craven.“The Paralympic family is united in grief at this horrendous tragedy which casts a shadow over what has been a great Paralympic Games here in Rio.”A moment of silence was held during Sunday’s closing ceremony.“This is the first and hopefully the last death we’ve had in Paralympic sport at a Paralympic Games,” added Spence.“But accidents happen in sport and we have great medical care at all our world championships and at the Paralympic Games. It’s just very tragic that in this case someone has lost their life.”Reuters contributed to this report.