They came to watch the bridge explode

The Maariv Bridge demolition: Never have so many gathered to see so few blow up so little 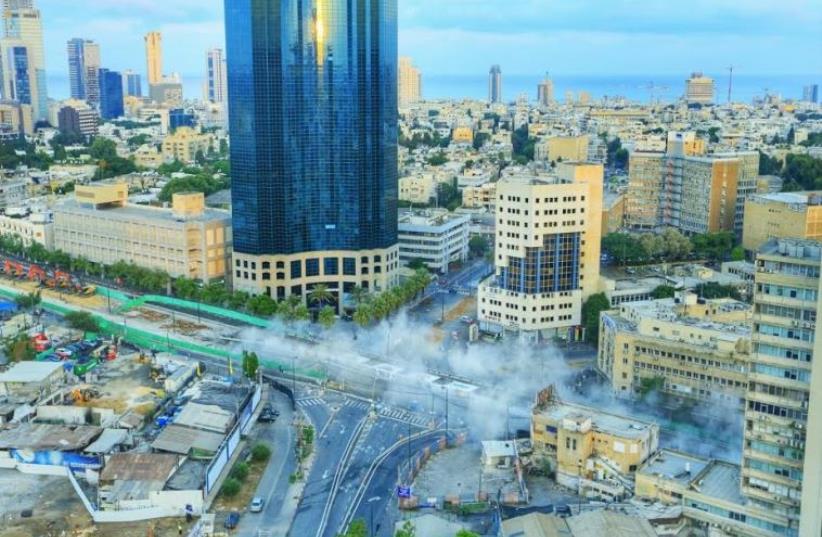 The Maariv Bridge demolition
(photo credit: SHLOMI MIZRAHI)
Advertisement
Judging by the pre-game hype in the national press, something akin to the moon landing or the planting of the US flag on Iwo Jima took place in Tel Aviv on Friday morning at 5:30, as hundreds gathered in the center of town to see the iconic Ma’ariv overpass blown up to make way for the city’s light rail system.The situation on the ground at judgment hour didn’t live up to the hype, but it was a carnival of sorts nonetheless.Ori Benaim was sober as a judge on Carlebach Street at 5:30 a.m. when she said she thinks her children will learn about the demolition in history class 20 years from now. The 18-year-old came with three of her friends from Pardes Katz in Bnei Brak just to see the action.“We all got dressed up for this and took pictures before and we’ll take some after. This is history,” she said.When asked if she had any particular memories from the bridge or the intersection it passed over, she said simply, “No, the junction and the bridge – it’s just rats and trash there.”
The destruction of the Maariv Bridge
There were well over 100 bystanders on Carlebach Street facing the bridge at the junction with Menachem Begin Boulevard, and similar-sized crowds on Lincoln and Yitzhak Sadeh streets. A large projection screen was set up for the crowd on Carlebach, and a few Chabad Hassidim had set up a table for bystanders to lay phylacteries, while a promoter handed out flyers for parties starting after the blast.Though this reporter did smell marijuana smoke wafting through the crowd, there were far fewer drunk people than some would have expected to find on the street in this part of Tel Aviv this early on a Friday, and no one visibly on cocaine, even though the viewing spot was only a few doors down from one of the city’s most infamous nightclubs.That said, Sharona Levy’s friends seemed to be having a good time. Sharona was the sober one, they all agreed, and she said she’d convinced her three drunken friends to stay up the rest of the night after bar-hopping in Tel Aviv to come see the blast.“It’s an historic thing we’ll all remember,” she said, but her three girlfriends didn’t seem to be in any condition to remember much.With all the talk about history, it should be noted that the so-called Ma’ariv bridge was never much of a bridge, but a glorified two-lane overpass that skipped over a single intersection and might save you 10 or 15 minutes during rush hour. To put it differently, I delivered pizzas in college, but no one called me a restaurateur.Still, nostalgia is a funny thing, and in a city where a business that stays open for five years is an institution, the Ma’ariv bridge was an icon.Dedicated in 1976, it was originally named the “Eagles Bridge” in honor of the soldiers who took part in that summer’s Operation Entebbe rescue mission in Uganda. To most Israelis, though, it was the Ma’ariv bridge, named for the former headquarters of the Ma’ariv newspaper, which occupied an equally iconic building at the junction of Carlebach and Menachem Begin for decades until the paper was sold in 2012 and vacated the premises.The demolition makes way for the construction of a station of the Red Line of the Tel Aviv light rail, which began earlier this month. On the former site of the overpass will be an underground station of the Red Line, which is set for completion by 2021.The demolition was scheduled for 6 a.m., at which point a man in dark clothes surrounded by henchmen blew up the local landmark before hundreds of rapt citizens.Playing the role of the villain was Transportation Minister Israel Katz, who at 6:23 a.m. pressed down on a detonator straight out of a Wile E. Coyote and The Road Runner cartoon as an engineer detonated the actual explosives.By that point, dozens of onlookers had been holding their phones aloft filming since 6 o’clock, their arms cramping up by the minute.Finally, several rather muted explosions went off, and the bridge fell to the ground.No countdown could be heard at the viewing spot on Carlebach Street and it was over in a moment, at which point throughout the crowd people could be heard telling their friends, “No countdown? That wasn’t worth it,” before heading home to end their night out.One young man, Vic, was gathered with several friends watching the explosion, his crew carrying cans of Red Bull and a portable box speaker.Like others, Vic seemed less than impressed.“I was hoping there’d be a countdown and then my friends could film me while I turn my back to it and run away slow motion like in a movie with flames everywhere,” he said, a bit dejected, before asking, “Do you think we could do it again?”