Four other protests took place simultaneously throughout the country, including outside Prime Minister Benjamin Netanyahu's residence in Jerusalem, as well as the premier's home in Caesarea. 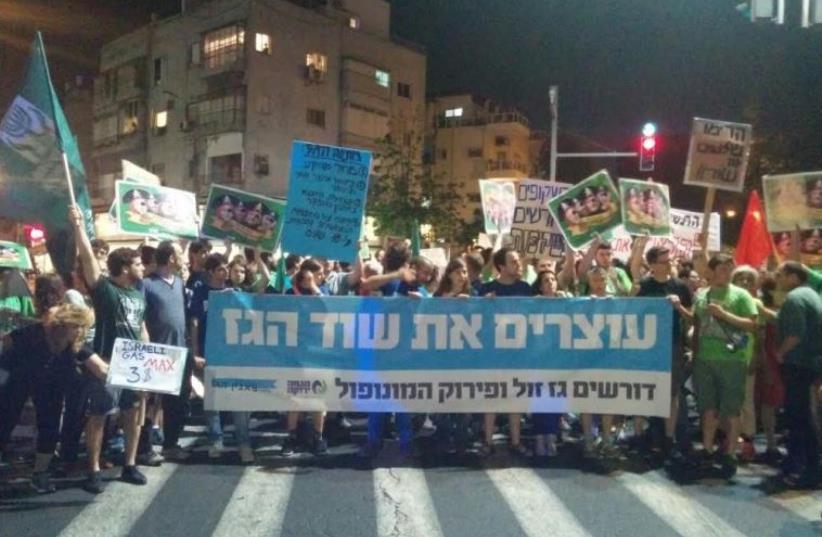 Tel Aviv gas deal protest
(photo credit: SHARON UDASIN)
Advertisement
On Saturday night, after a similar event exactly one week before, activists from the Green Course student movement led a protest against the gas deal at Tel Aviv’s Rabin Square and at other sites around the country.The activists demanded lower gas prices and increased use of gas in domestic factories, accusing the government of bending to foreign interests.“The people who walk with me now and took to the streets across the country show that the public has not remained indifferent to the secret natural gas outline that the Netanyahu government has led and that the struggle is intensifying,” said Mor Gilboa, CEO of Green Course.“We are waiting for the Israeli government to change its decision for the benefit of all and for the benefit of our children and grandchildren who will live here in the coming decades.”Under the government’s gas outline, Delek subsidiaries Delek Drilling and Avner Oil Exploration would have to exit the 282-b.cu.m.Tamar reservoir, whose gas began flowing to Israel in March 2013, selling their assets there within six years.Houston-based Noble Energy could remain the basin’s operator, needing to dilute its ownership from the current 36 percent share to 25% within the same time frame.The Delek subsidiaries and Noble Energy would need to sell their holdings in two much smaller offshore reservoirs, Karish and Tanin, within 14 months. Because the buyer would be required to sell gas only to Israel, export allocations intended for these reservoirs would be transferred to Leviathan, according to the outline.In 2013, the cabinet decided to cap exports at 40% of production, and pipelines designated for export will not be entitled to tax benefits guaranteed to local pipelines, as mandated by the Sheshinski Committee, whose recommendations on hydrocarbon taxation became law in 2013.Although the outline’s terms have been published, bringing the document to the cabinet for approval still faces a hurdle that the government had expected to overcome on Monday. The cabinet had intended to prevent Antitrust Commissioner David Gilo from interfering in the agreement, on national security grounds. Gilo has made clear he would not support the outline and went so far as to announce on May 26 his resignation, effective in August.Economy Ministry Arye Deri declined to exercise his authority to circumvent Gilo’s objections, but transferring his powers to the full cabinet requires both cabinet and Knesset authorization, while the government succeeded in getting only the first.It remains unclear when a new Knesset vote on the matter will take place. The gas plan itself does not need to be approved by the Knesset.