‘As residents, we all love Emek Refaim, and we will carefully preserve the character of neighborhood,’ says official. 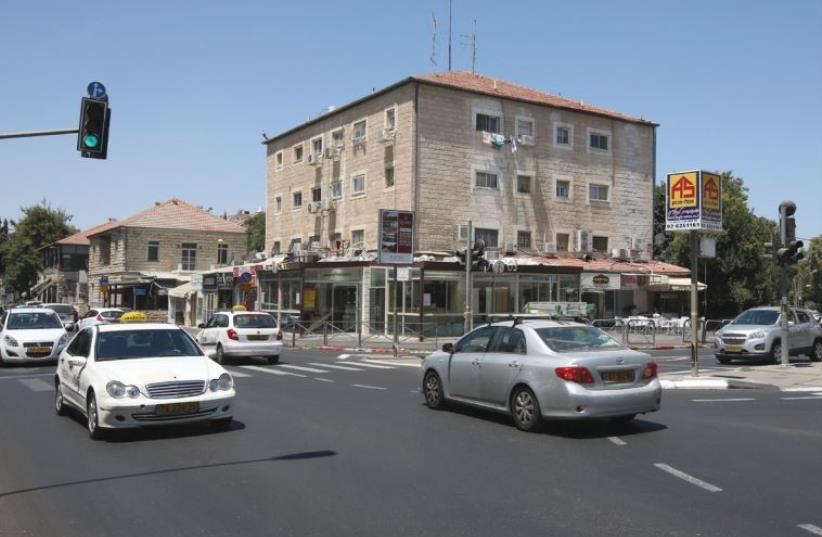 Emek Refaim Street today, where it intersects with Rachel Imenu Street
(photo credit: MARC ISRAEL SELLEM)
Advertisement
The Transportation Ministry and Jerusalem Municipality say pointed concerns among the capital’s German Colony residents that a light-rail extension – to be constructed through the community’s celebrated main thoroughfare, Emek Refaim – will damage the neighborhood, are unfounded.The Blue Line, as it has been named, was approved by the municipality’s Planning Committee in January.The approximately 20-kilometer long light-rail line will traverse Malha, Emek Refaim and Ramot, serving as many as 250,000 residents from Gilo in the South, to Ramot in the North.A third route, to be called the Green Line, which will run from Mount Scopus to Gilo, is awaiting approval, the municipality said.“The city’s residents will be able to enjoy shortened travel times, fewer traffic jams, cleaner air and exciting urban renewal,” Jerusalem Mayor Nir Barkat said of the light-rail extension.Residents of the upscale, bucolic German Colony, however, contend that uprooting the beloved street, which is lined with popular cafes, restaurants and shops, will result in damage to historic buildings, bankruptcy for area businesses and a pronounced drop in their quality of life.“I am opposed to this plan because I think it will destroy the whole essence of the neighborhood,” said Laurie Blendis, who has lived in the German Colony for 20 years, at a community council meeting discussing the project last week.Yet, according to Transportation Ministry official Shmuel Elgrabi, the project will benefit the community by significantly reducing congested traffic and pollutants, while providing “modern traffic solutions.”Citing the success of the Red Line, which transformed downtown Jerusalem’s Jaffa Road into a pedestrianized zone, devoid of cars and buses, Elgrabi said the same principle will benefit Emek Refaim, by providing more open spaces and less noisy and dangerous traffic.Moreover, he emphasized that despite residents’ concerns that the road will be uprooted in the coming months, the Blue Line will break ground “no earlier than 2020,” and has yet to receive final government approval.“The Blue Line is currently only in the developmental phase, and is still in the process of receiving final approval from the regional committee,” he said in a statement last week. “Naturally, [final plans] can only be assessed after approval of the plan in principle.”According to Elgrabi, planning for the Blue Line – which is part of a city-wide urban renewal program to improve the capital’s congested and antiquated transportation infrastructure – began five years ago.All developments since then have been fully transparent to the public, he added.“Every time consultations were held with representatives of the community council and residents,” he said. “We are aware of the concerns of residents, and we maintain a continuous dialogue with them professionally.”Elgrabi said widespread concerns that damage to area homes, trees and buildings, dating back to the Templers in the 1840s, are misguided.“None of the structures will be damaged, and there will be complete access to all houses at all times,” he said, adding that the ministry and municipality plan to plant “many more trees, just as when we planted around 4,000 trees along the Red Line.”“As residents, we all love Emek Refaim... and we will carefully preserve the character of neighborhood,” he continued.“We believe that the proposed light-rail solution is gentle, safe and sensitive, and will [engender] a good quality of life on the street, and in every area of the Colony. It should be remembered that the present situation is difficult due to buses and cars loading the street, and blocking the shops and the whole Colony.”Citing, again, the Red Line’s Jaffa Road as a successful model, he said the Blue Line will remove thousands of polluting vehicles and transform Emek Refaim into a safer, quieter area benefiting residents, business owners and visitors.In the meantime, Elgrabi said that long before the project reaches final approval, the ministry and municipality will continue to work closely with the area’s community council and residents to ensure construction is carried out “in a smart way, so that life will continue, even during the work.”“After the project is completed, traffic will be reduced on the street and the Colony will thrive,” he said.“We are presenting all developments to the public, and conducting a dialogue with community representatives to remain professional and considerate.”