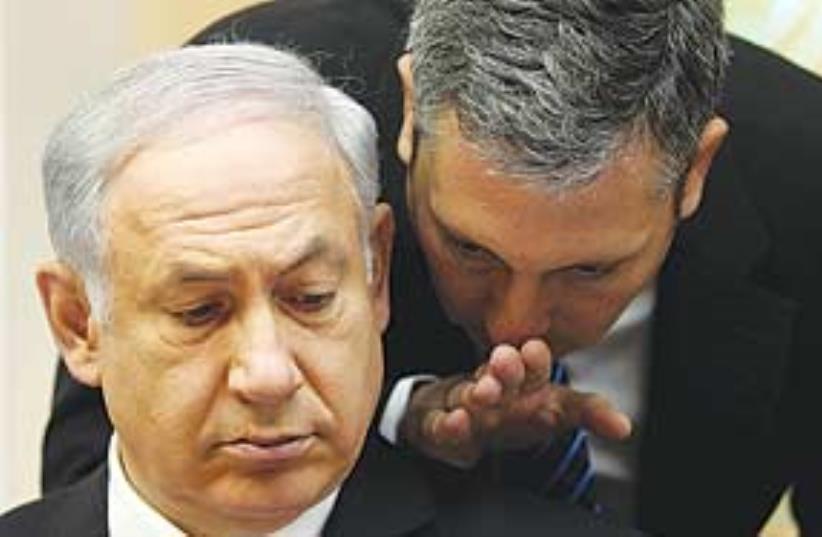 .
(photo credit: ap)
Advertisement
In a few short minutes, the cabinet unanimously decided on Sunday to give Prime Minister Binyamin Netanyahu – who is formally the health minister – the authority to make a decision on the issue of ancient bones found on the site of the Barzilai Medical Center’s planned fortified emergency department in Ashkelon.United Torah Judaism MK Ya’acov Litzman, who is deputy minister in charge of the Health Ministry, was present at the session but is not permitted to vote. He voiced his personal and factional opposition to the decision – expected in several days – to move the bones, which according to state archeologists are the remains of pagans and not Jewish bones, as claimed by Litzman.The Jerusalem Post learned that Netanyahu “coordinated in advance with Litzman” the prime minister’s statement that he would decide what to do about the emergency department construction to protect hospital patients, staffers and visitors against possible Palestinian terror rocket attacks, a project that has been in the planning for four years.But Litzman nevertheless expressed in the session his strong opposition to moving the bones so a reinforced department could be constructed; Litzman has been calling for leaving the skeletons in place and moving the emergency department’s construction site to a parking lot hundreds of meters away.While he voiced his opposition to the cabinet decision, Litzman did not say what he would do if Netanyahu decided against him. The deputy minister denied that any lives would be endangered by an additional two-year delay and more than NIS 140 million extra in costs for completing the department, but there was no debate.“I asked the director-general of my office [Eyal Gabbai] to investigate the matter and report the findings. Based on this, I ask that the government grant me the authority to make a decision to replace the decision made previously,” Netanyahu said. As Litzman’s decision to move the planned building has drawn fierce criticism from figures on both sides of the political spectrum, “blaming” Netanyahu takes him off the hook.Sources in UTJ told the Post that the late Rabbi Eliezer Schach, a leading rabbinical authority for the party before his death, had said it should never leave a government coalition over bones. They added that even as Litzman threatened to resign, he was preparing his plan for free dental care for children, which is of high importance to the growing haredi community.
Israel Medical Association chairman Dr. Leonid Eidelman sent a messageto Netanyahu after the cabinet meeting, congratulating him on hisstatement that he would decide what to do about the urgently neededAshkelon hospital facility. He called on Netanyahu to “make the only correct decision that willsave lives. The residents of Ashkelon and the South immediately need aprotected emergency department that will not expose them to the dangerof fire during war or relatively quiet periods,” he said.“As prime minister who serves also as health minister,” Eidelmancontinued, “I am sure that you will give the security of residents ofthe South first priority. We, the doctors, will back [you] up on thiscourageous decision.”
Advertisement
Subscribe for our daily newsletter