By ABE SELIG
AUGUST 15, 2010 13:23
gilo wall 311
(photo credit: Marc Israel Sellem)
Advertisement
One of the most striking symbols of the daily violence faced by Jerusalem residents during the terror-filled years of the second intifada began coming down on Sunday morning, as the IDF started to disassemble the long link of concrete barriers surrounding the southern perimeter of the capital’s Gilo neighborhood.The barrier was erected in 2002 to protect residents against what had been incessant shooting attacks from the adjacent Palestinian town of Beit Jala. The attacks subsided soon after, although security sources have long pointed to the IDF’s Operation Defensive Shield – which was launched in the West Bank at the end of March 2002 – and not the barrier, as the primary reason for the decrease in attacks, which after 2003 halted completely.Nevertheless, the long period of calm that has marked the time since the barrier went up was cited by the IDF last week in its formal announcement regarding the decision to begin dismantling it.Stressing that the decision to remove the protective structure was made “as a result of situational assessments in the Central Command, [and with] staff work and agreement among all of the relevant officials,” the IDF announced last Thursday that it would work in tandem with the Jerusalem Municipality and police to begin taking the barrier down.Still, residents of Gilo, and particularly those who live on Rehov Ha’anafa, which suffered the brunt of the gunfire directed at the neighborhood, were more than a little bit hesitant Sunday to accept such rationalizations.“All this will do is start the shooting all over again,” said one resident, who gave her name as Rachel.“I don’t know what they’re thinking by taking the barrier down,” she continued. 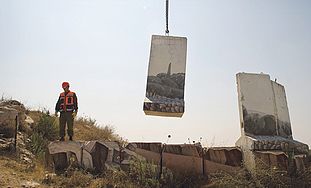 “The security situation is getting worse, not better. And either way, these concrete blocs have become part of our daily life. They don’t bother us, so why take them down?” Rachel added that her 9 year-old daughter had spent nearly her entire life with the reality of the concrete barrier around the neighborhood.“It’s given her and other residents here a feeling of security,” she said. “And now that’s going to be gone.”Other residents, like 88 year-old Nissim Ginossar, were more or less on the fence.“I don’t know and I can’t decide if this is going to be a good thing or a bad thing,” Ginossar said as he strolled down Rehov Ha’anafa on Sunday morning. “Personally, I was never very affected by the shooting when it was going on, even though a bullet hit a car in the parking lot of my building.”Ginossar added that it could never be 100 percent safe.“It could be that they’ll start shooting again, or maybe not,” he explained. “But they could also just come into the neighborhood with a knife and stab somebody.” He was alluding to an attack in Gilo nearly two years ago, when a Palestinian youth stabbed a policeman and wounded him, together with an 86 year-old man, who died from his wounds.Reached for a response to those sentiments on Sunday, an official from the IDF’s Central Command told The Jerusalem Post that the army had received a request from the Jerusalem Municipality and the Jerusalem Police to remove the barrier.“After assessing the situation and looking into the security needs and requirements, we came to the conclusion that it’s not necessary to leave the barrier there,” the official said.“If the municipality and the police are asking to have it removed on behalf of the residents of Gilo, then we did not see any reason not to remove it.”“The security situation is such that there is ongoing coordination [between the IDF] and the Palestinian security forces,” the official continued.“And we can, indeed, take this step and make things look a bit more normal there than they do at this time.”In response, city officials said that they had decided to pursue the removal of the barrier after members of Gilo’s neighborhood association contacted the municipality and asked that the barrier be taken down.“The municipality has been working with Gilo’s neighborhood association – which is the representative body of the neighborhood’s residents – in coordination with the army and other relevant security agencies, since before [Jerusalem Mayor Nir] Barkat took office, regarding the issue of bringing down this specific security barrier,” Barkat spokesman Stephan Miller told the Post on Sunday.“This is something that has been done with the support of the residents and the relevant security agencies, and it was decided to bring down the structure.”“A month ago, members of the neighborhood association went to every house in the area to hand out information [regarding this development], and the residents have been involved in the process.”Yaffa Ben-Arush, who heads Gilo’s neighborhood association, confirmed Miller’s comments on Sunday, telling the Post that, “this entire process started with requests from residents here, who said, ‘it’s quiet, let’s take down the barrier.’” “We went to the municipality, who in turn, spoke to IDF, because in the end this is a security decision,” she said.“But I’m surprised to hear that there were people who weren’t happy about this development.”“Everyone we’ve heard from, except for one person, said they wanted this to happen.The army is also doing it in an orderly way, numbering the blocks, so that if, God forbid, something happens, they can put it back up immediately.“But we’re happy that it’s happening, because we’re hopeful that it will be the beginning of something more positive, and just maybe, peace,” Ben-Arush said. “We want to believe that the quiet has returned, and this time, for good.”