By HERB KEINON
FEBRUARY 3, 2010 00:59
Advertisement
Hamas is responsible for the explosives that washed up on the beaches of Ashdod and Ashkelon on Monday, Prime Minister Binyamin Netanyahu hinted during a joint press conference Tuesday afternoon with visiting Italian Prime Minister Silvio Berlusconi. 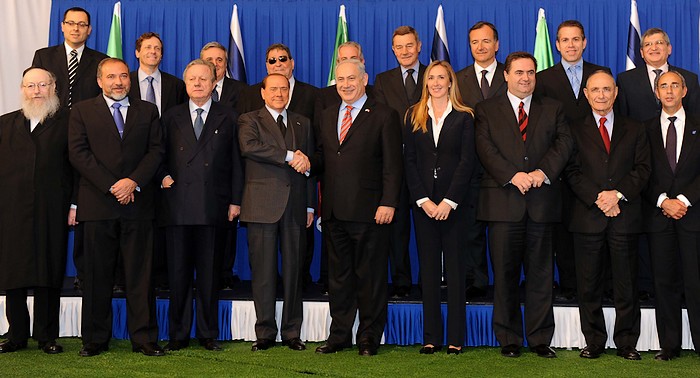 Netanyahu said that Israel would respond to the failed terror attack.During the press conference, the prime minister also responded to remarks made earlier Tuesday by senior Hamas member Mahmoud A-Zahar, claiming that Netanyahu was responsible for the impasse in talks to secure the release of captured IDF soldier St.-Sgt. Gilad Schalit.Netanyahu stressed that Israel has two objectives, the first of which is bringing Schalit home safe and sound. The second objective, he said, was ensuring that terrorists released within the framework of a prisoner swap would neither engage in terrorism in Judea and Samaria nor use the area as a base for terror inside Israel."We have an objective, and that is to bring Gilad Schalit home safe and sound. And we have a second objective, which is tied up with the first, and that is to do it [bring Schalit home] in a way that will not enable murderous terrorists - in the event that those will be released form prison – to return and kill the country's citizens, not in Judea and Samaria, and not via Judea and Samaria in the cites in Israel."He said that Israel's answer to Hamas's proposal dealt with those twoobjectives, and that Israel's answer was in the hands of the Islamistorganization's leaders. Netanyahu also said that these two goals were combined in the answer offered by Israel to Hamas through the German mediator a number of weeks ago. "If Hamas wants a deal, there will be one. If it doesn't, there won't be. The decision is in their hands," he said.Berlusconi, who said he has good relations with the Syrian leadership,pledged that he would talk to Syrian President Bashar Assad about thepossibility of renewing talks during his upcoming visit to Damascus.Netanyahu reiterated at the press conference that he was willing torenew talks with the Syrians immediately and without preconditions.
Advertisement
Subscribe for our daily newsletter