By JPOST.COM STAFF
APRIL 19, 2010 21:12
independence day march 311
(photo credit: Channel 2)
Advertisement
Independence Day celebrations commenced on Monday night with the traditional torch-lighting ceremony on Jerusalem's Mount Herzl, this year entitled, 'If you will it, it is no dream,' the famous line written by Zionism founder Theodor Herzl, born 150 years ago.Knesset Speaker Reuven Rivlin addressed the public, hailing Herzl and extolling his role in the birth of Zionism. "Israel's salvation didn't come from prophets or diplomats, but from those who had the courage to stop dreaming and start fulfilling," he said.Related Continuing Herzl’s dreamEditorial: 62, under a US cloudHappy Independence Day wishes from a PalestinianNetanyahu to Hamas: Bring back SchalitPM: Yom Haatzmaut celebrates two miraclesRivlin touched upon life in Jerusalem and warned of gaps in society. 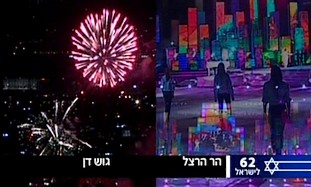 "Specifically at a time of cultural openness, we are witness today to a dangerous process of intensifying fortification of every group within its four walls," he said. "This fortification brings with it not only cultural or political polarization, but also fatal segregation in everyday life. For example, look what Jerusalem has turned into in the last decade: separate neighborhoods, separate public transport, separate shopping centers for haredi and secular [residents], Arabs and Jews. Ghettos and more ghettos, separated by walls of alienation, not by walls of cement."Before lighting the first torch, the speaker said that the Jerusalem reality was a far cry from the vision for "the city that was bound together" - a reference to the biblical Psalm 122. He said fear for the "other," whether Arab or Haredi, was "contrary to the very essence of Zionism."