'Gornisht' is a restaging of a piece Assaf made for TanzMainz in Germany in 2018 called 'Nothing' and will be presented at the Suzanne Dellal Center on February 4 and 5.

Choreographer Roy Assaf doesn’t like getting too specific about what his pieces are about. The audience won’t find explanatory program notes in any of his shows, and he prefers not to divulge too much in interviews.

“It’s never my intention to make a piece about something, not in any creation,” writes Assaf. “I rather look at my dance pieces as if looking at a landscape; it’s about offering things to wonder about, to be excited about, to dream of, to be afraid of, to doubt, to sleep on, to hate, to cherish, to yearn for…

“Without giving too much away, I can say that the piece pokes at the conventions and expectations around meaning, around interpreting and comprehending what we see, hear and sense. It’s a bit of an essay on the thin line between nonsense and meaning.”

Assaf, 40, is a prominent voice in the Israeli dance community. Born and raised in Israel, Assaf spent a large portion of his life as a dancer performing in works by Emanuel Gat. He began creating works in 2005 and has garnered a long list of awards both in Israel and abroad. He has created works for companies such as Batsheva Dance Company, the Royal Swedish Ballet and the L.A. Dance Project under the artistic direction of Benjamin Millepied.

His new evening, which is in fact only partially new, and will premiere this weekend at the Suzanne Dellal Center in Tel Aviv, is called Gornisht. The evening is a restaging of a piece Assaf made for TanzMainz in Germany in 2018 called Nothing. Over the last few weeks, Assaf has worked with a slightly smaller Israeli cast (10 dancers instead of the 13 who performed in Germany) to restage Nothing, making small changes to adapt the work to the new group. 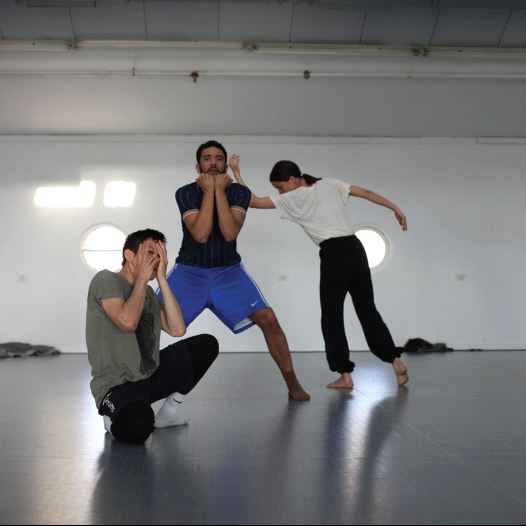 “Fundamentally, Gornisht is Nothing [its predecessor]. A great deal of the steps are similar, as are the music and sound score. It has nearly the same set design with the exception of one major element. It has neither the same budget nor the same working conditions nor the human resources dedicated to promoting and producing the show.

“It doesn’t have the same artists on stage who carry the piece and share their essence with the spectators who sit in the dark and witness them,” he explains.

One of the major changes in working conditions has been the cloud of uncertainty looming over the current production. With a large cast comes a relatively larger risk of COVID entering the studio and with many shows being canceled due to the current wave, Assaf felt he was on borrowed time.

“It has been exciting and tiring,” he writes of the time in the studio. “Needless to say, it has been nerve-wracking to work in a heightened state of uncertainty, knowing that the ability of a group of people to meet and work together in good health, obligated to a concrete deadline such as a performance date, is extremely fragile.”

Of the influence this cast has had on the creation, Assaf writes, “[Our cast], it’s different by virtue of the fact that the people are different, their stories are different – the mothers and fathers that raised them, the childhood friends that surrounded them, the places they grew up, the languages that were spoken to them (or withheld from them), the experiences that formed them.”

Gornisht will be presented on February 4 and 5 at the Suzanne Dellal Center. For more information, visit www.suzannedellal.org.il.