Sandy Koufax honored with a statue at Dodger Stadium

Koufax’s Jewish identity — and his famous Yom Kippur sitout — were highlighted alongside his many career accolades.

LEGENDARY LA Dodgers pitcher Sandy Koufax throws out the first pitch at the 2017 World Series. Derfner says his friends would not have loved the Jewish Koufax had he not been a star.
(photo credit: TIM BRADBURY/POOL PHOTO VIA USA TODAY SPORTS)
Advertisement

LOS ANGELES  — For Jewish sports fans around the world, Sandy Koufax has for decades occupied an unmatched legendary status.

Now, 57 years after the Hall of Fame pitcher sat out a World Series game to observe Yom Kippur, Koufax has officially been immortalized with a statue at Dodger Stadium — next to his former teammate, Jackie Robinson.

The Los Angeles Dodgers unveiled the Koufax statue with a pregame ceremony on Saturday, three years after the statue was initially announced. The unveiling was originally planned for the summer of 2020, before the COVID-19 pandemic hit.

Emceed by Dodgers broadcaster Charley Steiner, who is Jewish, the ceremony was attended by dozens of Koufax’s friends and family, plus members of the Dodgers organization, including manager Dave Roberts.

Koufax’s Jewish identity — and his famous Yom Kippur sitout — were highlighted alongside his many career accolades, which include three Cy Young Awards for the National League’s best pitcher and three seasons each with more than 300 strikeouts and an earned run average below two.

“An African American star athlete from Pasadena is about to be joined by a Jewish left-handed pitcher from Brooklyn, who in one defining moment, prior to the first game of the 1965 World Series, he galvanized an entire community, and a generation of Baby Boomers — children of the ’60s and ’70s who are now adults in their 60s and 70s,” Steiner said in his opening remarks.

During a tribute video played later in the event, Koufax’s decision not to pitch in Game 1 of the 1965 World Series was referred to as “an act of conscience, principle and even peaceful disobedience.”

The Jewish references ended there — with no mention that the ceremony took place on Shabbat — but the praise for the 86-year-old lefty did not. 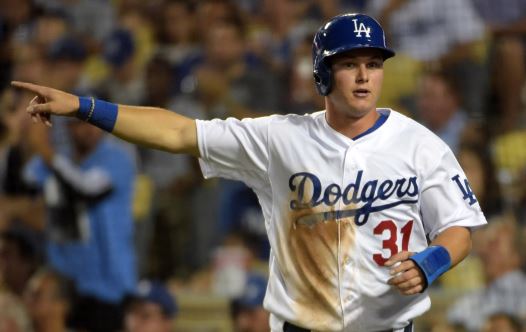 Torre, who ended his managerial career with the Dodgers from 2008-2010, marveled at Koufax’s pitching prowess, including the times he faced him as an opposing batter. Kershaw spoke about Koufax’s friendship and mentorship.

“Sandy, one day I hope I can impact someone the way you championed me — you really have — left-handed pitcher or not,” Kershaw said.

Following the tribute video, Walter took his turn at the podium. He called Koufax “one of the greatest players of all time,” but also emphasized his influence off the field.

“So, Sandy, when you’re great on and off the field, this is one of the things that happens for you,” Walter said, pointing toward Koufax’s heretofore covered statue, which was then revealed to applause.

Finally, Koufax himself addressed the crowd.

He called the statue “one of the greatest honors of my life,” and offered a brief retrospective of his illustrious career, beginning with his introduction to baseball at Lafayette High School in the Bath Beach section of Brooklyn. Koufax thanked various coaches and teammates, paying special tribute to Robinson.

The two Hall of Famers overlapped for two years with the Brooklyn Dodgers — the first two seasons of Koufax’s career and the last two of Robinson’s. The Dodgers moved from Brooklyn to Los Angeles in 1958, Koufax’s fourth season with the team.

“Jackie went out of his way to make me feel welcome, and I’ll never forget his kindness on that,” he said.

The two statues were both made by sculptor Branly Cadet. Koufax chose the pose for the statue and the quotes engraved on its edges. The sculpture — showing the 6-foot 2-inch Koufax in his full enormous stride, about to deliver a pitch — is 10% larger than life size.

In 1972, the three-time World Series champion became the youngest player ever elected to the National Baseball Hall of Fame and that same year the Dodgers retired his No. 32. His career was cut short at the age of 30 by arthritis in his left elbow.

Fifty years later, the golden-armed Jewish left-hander from Brooklyn — and his iconic windup — are permanently set into bronze.