Bulldozer at the Helm 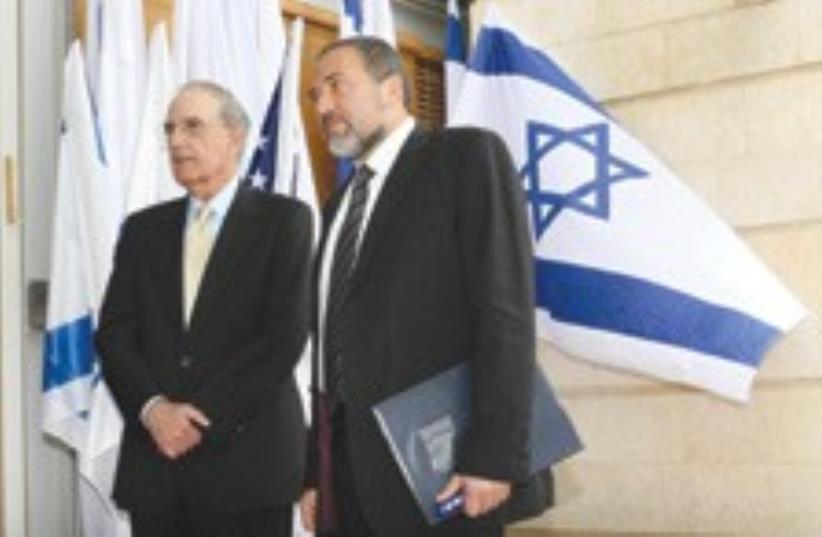 Foreign Minister Avigdor...
Foreign Minister Avigdor Lieberman meets U.S. envoy George Mitchell
Photo: Ariel Jerozolimzki , JRep
Many immigrants from the former USSR, who see themselves as culturally superior to veteran Israelis, are also drawn by Lieberman's in-your-face denigration of the old elites, and his strongman Putin-like demeanor. But will all this be enough to enable him to retain and even build on his immigrant constituency? Bronfman has his doubts. "Past experience shows the Russian immigrant vote tends to be unstable. In 1992 they voted Labor, in 1996 Likud and in 1999 again Labor. The only Israeli leader the Russian immigrants were loyal to over time was Ariel Sharon. So it's hard to say whether the support for Lieberman will last," he says.
Other astute observers, however, are convinced Lieberman has built a very solid power base. "All the big national parties, Likud, Labor and Kadima present themselves as national parties with the nation's interests at heart, but actually all have a clear ethnic base. The Likud's is the Sephardim, Labor and its successor Kadima have the Ashkenazim, and Lieberman has managed to do the same thing with the Russian speakers, positioning himself as a major player for the future," says Ben-Gurion University political sociologist Lev Grinberg.
Grinberg argues that Lieberman brilliantly further increased the scope of his appeal by appropriating the left's two-state approach to peacemaking with the Palestinians. "The whole Israeli left discourse is based on making peace with the Palestinians, not because they deserve statehood, but because they constitute a demographic threat. And he simply says okay, I will deal with that danger more effectively than they will," Grinberg explains.
Indeed, the post-Zionist Grinberg blames the Israeli center-left for helping to create conditions for Lieberman's rise, mainly by legitimizing the politics of force against the Palestinians. "He said only Lieberman understands Arabic, implying that all the Arabs understand is force, and that therefore there is nothing to talk to them about. But who actually acted along those lines? It was the Kadima-Labor government that waged two catastrophic wars that got Israel nowhere," he asserts.
Lieberman's most controversial demand - making citizenship dependent on swearing an oath of loyalty and state supplementary income payments contingent on army or other forms of national service - are not explicitly mentioned in the coalition guidelines, and the chances of any such legislation seem extremely remote. Still, Israeli Arabs are concerned. "I think his ultimate goal is to get rid of us. Step by step. First to make our citizenship conditional, then to get rid of us. But we are deeply rooted here and nothing will move us," says Balad Knesset member Jamal Zahalka, who points out that nowhere in the world is the innate right to citizenship of the native born conditional on loyalty oaths or anything else.
Zahalka, like other radical Israeli Arab leaders, adamantly refuses to recognize any linkage between their provocative rejection of the Zionist enterprise and Lieberman's rise. And Zahalka, who in October 2007 said Arab society would "vomit out" and treat as lepers those of its young people who volunteered for national service in Israel, denies that the Israeli Arab leadership's increasingly radical messages may have helped spark a pro-Lieberman backlash. "We are the victims," he says, "not the guilty." As for Lieberman's plan to place Umm el-Fahm and other Israeli Arab towns and villages in Palestine, Zahalka says there is no way Israel's Arabs will agree to anything of the kind. "The aim is to weaken the Arabs in Israel. If you say Umm el-Fahm is going to be on the Palestinian side, why invest there, why grant people there rights? It puts a question mark on our citizenship, and we won't stand for it," he declares.
The day after he became foreign minister, Lieberman was questioned by police for seven hours. He is suspected of taking bribes from two wealthy businessmen and illegally drawing hundreds of thousands of dollars from a company called M.L. 1, set up by his daughter Michal in 2001. At the time she was only 21, and police believe she was fronting for Lieberman. He is suspected of receiving a salary and severance pay from the company when he was a sitting Knesset Member, which, under Israeli law, is illegal.
What worries legal expert Moshe Negbi is the fact that Lieberman, a man under investigation, seems to control, directly and indirectly, a number of key law enforcement posts in the new administration. Negbi, a contributing editor to The Jerusalem Report, points out that in the coalition negotiations with Netanyahu, Lieberman decided who would be minister of internal security (or police) and minister of justice.
True, in the Israeli system neither of these two officials has any say in ongoing investigations. But both have a lot of clout in making appointments of people who do. The internal security minister decides on the appointment of police investigators, and the justice minister heads the committee for appointing judges, as well as having a big say in the appointment of the next attorney general, to replace Menahem Mazuz as head of the state prosecution. Mazuz is expected to step down in about six months, and, Negbi says, Lieberman and former prime minister Ehud Olmert may well simply be waiting for a new appointee who will drop the charges against them. "All this is very dangerous for the rule of law," Negbi declares.
Negbi adds that David Rotem, the chairman of the Knesset's Law, Constitution and Justice Committee, is also a Yisrael Beiteinu man, and points out that his predecessor, Kadima's Menachem Ben Sasson was instrumental in protecting the Supreme Court and pushing for a full-fledged constitution. In Negbi's view, Rotem's potential impact on both of Ben Sasson's pet projects could be disastrous. "With Rotem as committee chairman, I would rather remain without a constitution, because he could well frame one that that instead of limiting executive and majority power might actually strengthen them," he warns.

Foreign Minister Avigdor...
Foreign Minister Avigdor Lieberman meets U.S. envoy George Mitchell
Photo: Ariel Jerozolimzki , JRep
According to Negbi, the only political barrier to preventing a Lieberman-led assault on judicial checks and balances is the Labor Party, and he fears it might be too weak to make a difference. "They did get various conditions into the government guidelines, like preserving the Supreme Court's standing, and they have a veto on proposed changes to basic laws. But I am not sure to what extent they are really committed to preserving the rule of law, and I am very uneasy," he says.
Lieberman and his supporters reject the charges against his diplomatic credentials and his alleged threat to democracy out of hand. Ayalon says Lieberman is already working harmoniously with counterparts from all over the world and is about to embark on a tour of European capitals. He denies the Americans are angry about Lieberman's peremptory rejection of the Annapolis process, which he describes as "a desperate attempt by two failed administrations to find an agenda. But it led nowhere. It's history and the Americans aren't talking about it any more."
As for the anti-democracy allegations, Ayalon insists that Lieberman is more of a democrat than most. "We have been talking about changing the electoral system to something very similar to the American presidential model for years. And are people now going tell us the American system with all its checks and balances is not democratic?
"Secondly, when Lieberman speaks about civil marriage and easing conversions to Judaism, this is obviously all about civil rights, religious pluralism and democracy.
"And as for the Supreme Court's activism, there are many people besides Lieberman who argue that not everything should be within the court's jurisdiction," he retorts.
Ayalon also insists that far from being a racist, Lieberman is actually offering Israeli Arabs a way into mainstream Israeli society. Like Jews who serve in the army, Arabs who do national or community service would be rewarded. "Military service for Israelis has for years been the entrance ticket into many areas of Israeli life and work. Now it will be open for all Israeli citizens. It's leveling the playing field more than anything else," Ayalon claims.
Ayalon also defends Lieberman's plan to put Umm el-Fahm and other Israeli Arab towns and villages in Palestine. He argues that the territorial and population exchange it entails should be seen as part of major historic process bringing the Israeli-Palestinian conflict to an end. "We really want to implement a vision of a new regional architecture, without being slaves to past constructs, like the Green Line, which was never a permanent border between Israel and the West Bank, only a temporary armistice line. So it's legitimate to put everything on the table, including new borders, especially since people won't be evacuated from their homes or lose their rights. And it is certainly a basis for negotiation," Ayalon maintains.
With his broad sweep and bulldozing qualities, Lieberman could have an enormous impact on the architecture of the Middle East and the tenor of Israeli democracy. On the other hand, if police whispers prove correct, he could very soon find himself out of office, facing corruption charges and the early demise of the party he created and the home for the controversial ideas he embraced. •
Advertisement
Subscribe for our daily newsletter