Weekly Schmooze: 'Arrested Development' is back!

By LAHAV HARKOV
OCTOBER 6, 2011 13:56
weekly schmooze 311
(photo credit: Courtesy)
Advertisement
Everyone’s favorite dysfunctional Jewish family, the Bluths, is back! Mitchell Hurwitz, creator of the cult TV series Arrested Development announced this week that a 10-episode season of the show will appear on television and a full-length film will be released in 2013. The news came at the New Yorker Festival, almost five years after the show’s final episodes aired during the opening ceremonies of the 2006 Winter Olympics. Here's a celebratory Bluth family chicken dance:Speaking of untraditional families, with gay marriage now legal in New York it was inevitable that this would happen: Fiddler on the Roof lyricist Sheldon Harnick has written a same-sex version of “Sunrise, Sunset.” According to The New York Times, the new version of the song was sung officially for the first time at the wedding of Richard Skipper and Daniel Sherman in Tappan, NY last Sunday. Harnick wrote a male and a female version of the song, whose lyrics can be found at www.revjosh.com 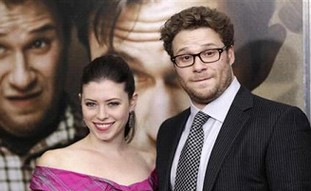 Seth Rogen and Lauren MillerIn other wedding-related news, actor-comedian Seth Rogen, 29, married long-time girlfriend writer Lauren Miller, 30, in Sonoma, California on Sunday. The two were married in a Jewish ceremony, officiated by a female rabbi, and according to Us Weekly, Miller surprised Rogen by having a video game arcade installed at the reception. The couple met in 2004, when both were staff writers on Da Ali G Show.The always-adorable Elmo visited Late Night With Jimmy Fallon last week, and seemed to have beef with comedian Andy Samberg. The furry red resident of Sesame Street tried to stare Samberg down, while Samberg attempted to play it cool. The two also determined that they look similar in profile.The Cameri Theater in Tel Aviv is planning a Hebrew-language version of the musical “Cabaret.” According to Yediot Aharonot, the production will be kicked off in October by none other than Liza Minelli, who starred as Sally Bowles in the 1972 film, and the theater will be naming one of its halls after Vincente Minelli, the actress’ father.A big “Mazal Tov” goes out to Google, which is celebrating its bar mitzvah this week. That’s right, the internet search engine with the Jewish pedigree – founders Sergey Brin and Larry Page are members of the tribe – is 13 years old. New York Mayor Michael Bloomberg tweeted “best wishes on your Bar Mitzva” to Google. They grow up so quickly!Another week, another Bar Refaeli rumor. This time, the Sports Illustrated cover-girl is reportedly romancing French President Nicolas Sarkozy’s son, Pierre Sarkozy. The two were seen together at the Rasputin nightclub in Paris, where Refaeli is currently attending fashion week.Actor Paul Rudd is a nice Jewish boy – but it turns out that what he really wants is to be a "guido." Watch him and Anne Hathaway audition for Jersey Shore in a segment from Conan O'Brien's talk show:The Weekly Schmooze collects the hottest Jewish culture news from around the world. Ranging from celebrities to philanthropy to quirky communities, we're here to schmooze about Jews. If you have any news to share with The Weekly Schmooze, write to: weeklyschmooze@gmail.com