Fruit of the vine

Discovering Hagafen Cellars, a kosher winery on California’s famed Silverado Trail complete with its own succa.

By GEORGE MEDOVOY
Grapes 370
(photo credit: George Medovoy)
Advertisement
NAPA – Robert Louis Stevenson brought notoriety to the now-fabled Napa Valley when he came here on his honeymoon in 1880 and wrote The Silverado Squatters. In the many intervening years, the valley has acquired an iconic persona as a rival to some of the world’s finest wine-producing regions, drawing countless visitors to its pleasant setting north of the San Francisco Bay area.Stevenson’s work recalls the long-extinct Silverado mine near where he and his bride honeymooned. But the name has since become associated with the Silverado Trail, a two-lane roadway bordered by wineries, where bikers can sometimes be seen pedaling past the vineyards.The trail runs parallel to the Napa River for about 40 kilometers (25 miles) between Napa and the small town of Calistoga, known for its hot springs and Saturday farmers market. It is also less developed than Highway 29 to the west – a more commercial stretch of road with large wineries, shopping opportunities, and restaurants.Either of the two roadways will provide you with a good taste of the Napa Valley, and the route you choose depends on how “developed” you prefer your exploration to be.Another option, of course, is to divide your time between both of these routes, because each one has wineries worth visiting.On this particular day, my destination is the Silverado Trail to meet Ernie Weir and his Israeli wife, Irit, at Hagafen Cellars, their kosher winery whose vintages have graced the White House table, including state dinners for visiting Israelis.When I pull off the road at the southern end of the trail, I drive up a long, narrow driveway bordered by 12 acres of Hagafen’s own Cabernet Sauvignon and come to a stop outside the winery’s modest two-story building and small tasting room with its adjoining, wood-covered patio, which doubles as a succa. 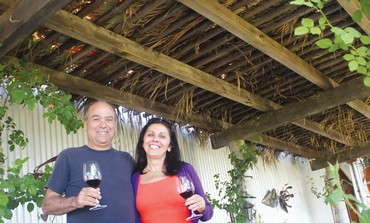 Bordering the pathway leading to the tasting room is a pretty flower garden adorned with sculptures, and beyond that and out of view, the Weirs have planted a vegetable garden and built a new chicken coop to raise eggs.I chat with Weir and his wife under the patio, where chimes sounded in the cool breeze and the afternoon light reflects off mosaic-covered glass tables designed by Irit, who is an artist and a Chinese-trained acupuncturist.He is dressed in his trademark work jeans and blue T-shirt, while his wife wasis wearing an attractive, peach-colored dress and a contrasting purple sweater.“The whole image of kosher wines has changed,” Weir begins. “Kosher wines are every bit as good as wines that are not made kosher. There’s very little distinction anymore....”The changing image of kosher wine is something that Weir knows well – he has been producing it for around 32 years and has witnessed the industry grow and broaden its appeal to ever-widening audiences.Weir says he first noticed a shift in taste from sweet to dry wines in the Jewish and non-Jewish world in the late 1970s. What’s more, a major Jewish winery had begun to put corks in all its bottles, “and that had some slight significance that they wanted to have their wines be taken more seriously, [and] that meant that eventually they would have to continue to improve the quality of the wines.”PERHAPS THE crowning achievement in the acceptance of kosher wine in America is the fact that it is sometimes served at White House dinners; the recent instance and the one of which Ernie is “most proud, extremely proud” was last June, when President Shimon Peres received the Presidential Medal of Freedom.For that event, the White House served Hagafen’s 2008 Pinot Noir and its 2010 Roussanne – a white grape variety originally from the Rhone region of France which was harvested from vineyards in Lodi, California, a small community near Sacramento.Weir describes the Roussanne as a blend of 85 percent Roussanne and 15 percent Marsanne, another white variety.The Roussanne wine, he says, is “straw-colored... with somewhat of an aroma of cut hay that would make it a little less vegetative than Sauvignon Blanc but a little bit more vegetative than Chardonnay, with the body and the... weight more like Chardonnay. It’s a nice intermediate wine, and it fits very well with fish.”There have been other noteworthy examples of Hagafen wines served at the White House.In 1981, when president Ronald Reagan hosted prime minister Menachem Begin, Hagafen’s 1980 Winery Lake Vineyard Johannisberg Riesling was served.And at a White House celebration last May marking Jewish-American Heritage Month, guests enjoyed the winery’s 2007 Napa Valley Brut Cuvee.That particular event had special sports-related significance for Weir because one of his baseball heroes was in attendance. 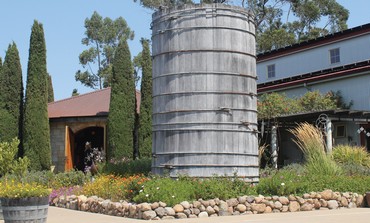 “I was really happy,” he says, “because the event was the one that [baseball legend] Sandy Koufax got invited to, and he doesn’t come out and appear very often.... I haven’t gotten him to the winery yet, but that would be a long-term goal.”Hagafen produces 100,000 bottles of wine a year and sells around the world and through its wine club and tasting room, which welcomes visitors. The winery also produces Cabernet Franc, Syrah and White Riesling.In addition, it has two other labels. One is a reserve called Prix, which is a play on the Hebrew blessing over wine: “pri hagafen,” fruit of the vine. The other is Don Ernesto, a jovial reference to Ernie himself.“Don Ernesto is our fun or poppriced, consumer-oriented wine,” he says.Weir’s connection to Israel goes back to 1973, when he worked on Kibbutz Ramat Yohanan near Haifa and began to reestablish his agricultural roots.“I’ve always been associated or attached to the agricultural elements in the Bible,” he says. “I’ve always thought, well, that’s very cool, we have these holidays that are agricultural....”When he returned to the United States, he settled in Napa and went to work for Domaine Chandon winery, eventually attending the prestigious UC Davis Department of Viticulture and Enology, where he earned a viticulture degree.The next step was starting a kosher winery.“I was young,” he says, “and I thought to myself, ‘What type of wine can I make to contribute to the world of wine and the community of wineries in Napa Valley?’ So when I saw many of my counterparts who were of Italian origin or Swiss origin or whatever making wine and... evoking wonderful cultural pride amongst their peers, I thought, well, let us see how we can do that ourselves.“There isn’t such a thing as Jewish wine, but there’s kosher wine,” he continues. “I really didn’t know all I was getting into, so to speak, in the world of kashrut, but I’ve learned.... Since then, many other wineries have joined... around the world.”AROUND THE same time, Weir met his wife, who had moved to Los Angeles with her family after doing her army service in the IDF. On a subsequent trip to South America, she happened to meet someone who told her about a woman doing acupuncture in Berkeley, so she moved to Berkeley and took a job with her.“I used to clean her office,” she recalls, sharing a glass of wine with her husband. “Within a week, she asked me if I wanted to be her secretary. So I went from cleaning to secretary.” At the same time, Irit became “very impressed with the body-mind connection and also the idea of healing without medication.”She decided to study acupuncture at the American College of Traditional Chinese Medicine in San Francisco. From there, Irit went to China for a master’s degree in acupuncture and worked in a hospital in Guangzhou for four months.In the early years of the winery, she was more involved in its operation, though these days, even with her acupuncture practice keeping her busy, she manages to make joint decisions about Hagafen with Ernie.The couple visits Israel every year, and Irit recently gave a workshop at an international acupuncture congress in the country, noting that Israel has “wonderful healers.” In the last 10 years, she says, “it’s amazing” to see the growth and acceptance of acupuncture in Israel, where there is what she terms a “blend” of medical approaches.By contrast, she notes, “there’s more of a struggle” between doctors and acupuncturists in the United States.As we sit around one of her mosaic tile tables, she explains that she produces her own tiles and works with tempered glass, too. Lately she has been working with oil paints and is scheduled to show her work at an exhibit slated for the large Mondavi Winery in Napa.In February or March of 2013, the couple will lead a wine tour to Israel for about 10 members of the Hagafen wine club.“Over the course of a week, we might be able to tour three or four wineries every day,” Weir says. “It will include four or five days of wineries that are kosher with restaurants and hotels, and maybe another non-kosher option for another day or two.”“Ernie has a personal relationship with almost every winery in Israel, so it will be a very personal tour, and when it comes to the restaurants, we also have some good friends... so it will be nice,” says Irit.For some years, Weir did consulting with Israeli wineries, and there is still some interchange going on.“Some [Israeli winemakers] come [to Napa] because of the kosher aspect,” he says, “but some come because they know that in Napa we’re on the cutting edge of New World viticulture and wine-making, and they come to see what kind of small, little piece of information they might find about a new variety, a new clone of a variety, a new technique... just sort of what’s happening.”For Weir, this Israeli connection means that he has really come full circle – with winemakers now traveling to Hagafen Cellars from Israel, the country where he first renewed his agricultural roots.
Advertisement
Subscribe for our daily newsletter