A rehabilitation program for recently released prisoners designed for Orthodox men claims to have an unparalleled success rate.

By YOCHEVED MIRIAM RUSSO
MARCH 5, 2010 21:23
keren hateshuva CEO prisoner rehabilitation 311
(photo credit: YOCHEVED MIRIAM RUSSO)
Advertisement
All day long at the large modern home on Rehov Kadima in Ramot, the front door stands wide open. It’s not that someone forgot to close it – it’s intended to remain open.“The open door is symbolic, as well as practical,” says Rachel Ohana, spokeswoman for Beit Avraham, a hostel maintained by Keren Hateshuva, a nonprofit rehabilitation organization. “Our residents have had enough of locked doors and closed spaces. Leaving the door open says something all by itself.” The residents Ohana speaks of are ex-convicts, men who have served time in one of Israel’s prisons and are now working their way back to living a normal life outside the walls.The two hostels operated by the Keren – one in Ramot, the other in Beit Shemesh – function as homes for the men in transition and are not extensions of prison, says Asaf Yitzhak, who manages the Ramot facility. “Our residents spend a very intense nine months with us while we separate them from their former lives of crime and help them readjust to life outside. Making the transition from prisoner – where all decisions are made for you – to functioning as a free and working adult is extremely difficult. Our goal is to strengthen their commitment and to ease the trauma of the transition in every way we can.” Two things distinguish Keren Hateshuva’s ex-convict rehabilitation program from that offered by other halfway houses. First, Keren’s rehabilitation and reintegration program is designed for men who have made the decision to accept and maintain a Torah-observant lifestyle while in prison. Most are ba’alei teshuva, returnees to the mitzvot. Secondly, Keren’s program differs from others in its unparalleled long-term success rate. Research conducted by the Israel Prison Service shows that 92 percent of the Keren’s “graduates” become and remain crime-free, productive citizens for at least five years following their release. Among non-religious hostels, the recidivism rate stands at 10% within three years. Among those released convicts who return home without going to a hostel or halfway house at all, 67% return to prison due to some new infraction. “When we talk about our 8% recidivism rate, lots of people flat-out don’t believe it,” says Yoel Hazan, CEO and chairman of the Keren Board. “As far as we know, our recidivism rate is the lowest anywhere in the world.” KEREN HATESHUVA came into being in 1972 when Yoel’s father, Rabbi Avraham Hazan, formerly chief chaplain for the Israel Police and Prison Service, founded an organization to assist ex-convicts in reentering normative society. He found that those ex-convicts who adopted a Torah lifestyle were far more successfully rehabilitated and far less likely to return to a life of crime. Upon his retirement, Rabbi Hazan turned management of the Keren over to his son Yoel, who assumed full control in 2000. Today the two facilities are overseen by an active board of directors and operated by resident managers, a variety of therapists, counselors, a criminologist, rabbis and active volunteers.How does adopting a Torah-observant lifestyle help a just-released prisoner stay out of prison? Dr. Uri Timor, a criminologist at Bar Ilan University, wrote his 1990 doctoral dissertation on the subject. “My work focused on released prisoners who entered yeshivot upon release from prison, not hostels, per se,” he comments. “But there seem to be three factors that make the difference. First of all, when the released convict enters an institution where a religious lifestyle is in place, the former prisoner is far away from his old friends, the ones he associated with while he was involved with criminal activities. Now he has new friends, and he’s under the influence of a very different kind of people. That makes a big difference. Second, the person entering a religious setting has already made a big decision in his life. He has already, before he enters the institution, decided to create a new life for himself, a different lifestyle than before. So there’s the element of motivation. For whatever reason, before entering the religious institution, the ex-convict has already made a commitment to change his ways.”The third point made by Timor is unique to Judaism. “Under Jewish law, once a person has repented of his past and reformed, no one is permitted to remind him of his previous life. What that means is that in a religious setting, the ex-convict loses the stigma. With no one reminding him of what he once was, of how he once acted, building a new life very different from the old becomes that much easier.” 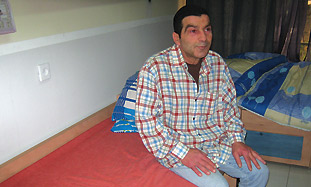