A Jewish celebration in Kazan

A predominantly Muslim city, its residents are proud of their ability to coexist with their fellow Jews and Christians. 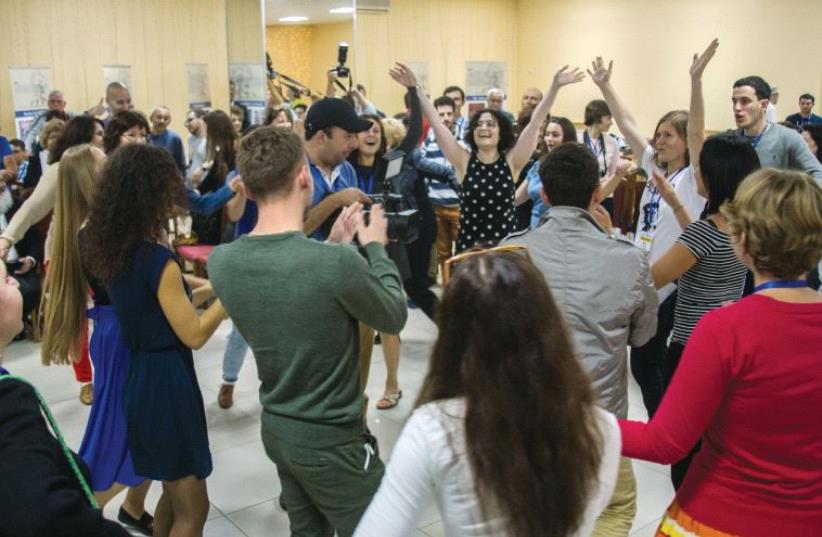 Having fun at a pre-Shabbat gathering at the annual Limmud FSU Kazan Volga- Urals region conference
(photo credit: SARAH LEVI)
Advertisement
Kazan, despite its relative global obscurity, is the capital city of Tatarstan, nestled on the Volga River 812 km. east of Moscow in the Russian Republic. The thousand-year-old city is known more recently for its athletics and educational institutions with 18 universities and roughly 40,000 students.Residents aren’t shy about mentioning their most famous alumnus, Vladimir Lenin, to visitors.A predominantly Muslim city, its residents are proud of their ability to coexist with their fellow Jews and Christians. The city’s mascot is Zilna the dragon, who, legend has it, “keeps the hate away” from this region. This dragon can be seen throughout the city in statue form and flying on flagpoles on their city’s banners.Kazan is a charming and picturesque city whose Kremlin is a UNESCO world heritage site, and is home to the Qol Sharif Mosque, built in 2005, and the Annunciation Cathedral, which was built in the late 16th century.A 10-minute drive from this mustsee tourist attraction is the heart of the city. The focal point is the pedestrian walkway, where the true essence of the city can be seen – a youthful majority of students and young families. The streets are packed with shopping malls, street performers, restaurants and cafés, pulsing with the energy of a lively student town.It was on this main drag in the city center where the fourth annual Jewish Music Festival took place on September 2, in connection with the second annual Limmud FSU (former Soviet Union) Kazan Volga-Urals region conference taking place that weekend. The concert brought together more than 450 spectators who enjoyed a free concert from local klezmer band Simcha, and Israeli fusion band The Shuk.A 30-minute drive outside the city center in the more rural and rustic part of Kazan was where the Limmud Conference was held at the Regina hotel and resort.It was in this setting, under a cloudy sky on a crisp autumn weekend that more than 600 Russian-speaking Jews of all ages had a chance to learn, meet, reconnect and enjoy together all that was offered at this event. 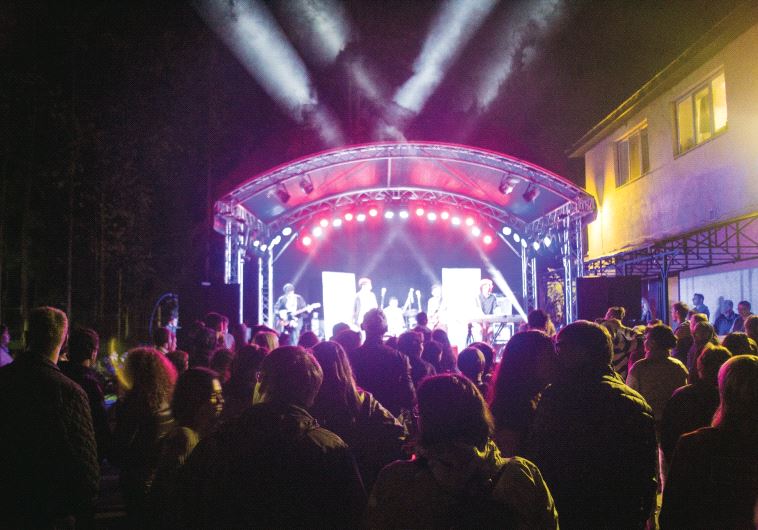 Evening dancing after havdala (photo credit: SARAH LEVI)
Limmud FSU is the brainchild of visionaries Chaim Chesler and Sandra Cahn, who founded these events that take place all over the former Soviet Union, the US and Israel. It is acclaimed for restoring a tradition of Jewish learning and strengthening Jewish identity. Birthright and MASA alumni make up the bulk of the participants, and Cahn and Chesler agree that this is an “important next step to bring the Jewish people of the Soviet Union back to their traditions and to feel connected to their history and community.”Limmud was founded in London in 1980 to help Diaspora Jews learn more about their culture, history and religion.Each year, these conferences set up shop in various parts of the world to help awaken a dwindling Jewish spark within these communities. Limmud FSU does essentially the same thing, but focuses solely on the former Soviet Union.Compared to last year’s event, the registration rate doubled from 300 to 600, and instead of the vast majority being from the greater Tatarstan region (which has a Jewish population of more than 10,000), participants also hailed from Moscow, Kazakhstan, Uzbekistan, Ukraine and other parts of Russia. For many, it was their first visit to Kazan.Communism fell after generations of cutting Jews off from the Jewish experience, and this created a unique opportunity to plant seeds of a Jewish revival in these fertile grounds of the former Soviet Union. Taglit Birthright, the Jewish Agency, Masa and Chabad helped reconnect Russian Jews to their Jewish roots that were severed under Communism. The role of Limmud FSU is to solidify these bonds and reinforce these roots through education and, of course, fun.As the Friday sun set over the sleepy outskirts of Kazan, the conference participants welcomed the Jewish day of rest by participating in a Reform kabbalat Shabbat or a religious traditional kabbalat Shabbat led by Itzhak Gorelick, Chabad chief rabbi of Kazan, or both or neither.The true beauty of this event was that it allowed participants to not only be proud of being Jewish, but to be proud of how they expressed that.The level of tolerance and coexistence between participants was so natural and seamless that it could have been easily overlooked.Following the Friday night Shabbat services and communal dinner, the lectures and workshops officially kicked off and went well into the night.Saturday’s schedule offered workshops, lectures, live music and activities for kids – including a magic show – that were almost entirely in Russian, with a handful in either English or Hebrew.Guests were invited to attend as many or as few lectures and workshops as they wished.A small sample of courses includes “Dreams Produce Monsters: Neurological Basis of Myths on Paranormal,” “Man and Woman, Why Do We Need Each Other?” “Cats in People’s World” and “Careful, the Session May Contain GMOs.”Limmud FSU encourages participants to attend at their own pace. While many used this as an opportunity to make the most of this packed schedule, there were also those who used it as a way to socialize and mingle with other Russianspeaking Jews. This is an important aspect of the event, as some participants come from communities with very few Jews; this event is an opportunity for them to get to know more of their fellow tribe members.A havdala ceremony ended Shabbat with more music from The Shuk, and then came one of the highlights of the conference: the dedication of an exhibition honoring the life of writer and Holocaust survivor Elie Wiesel. “From Sighet to New York” was curated by Wiesel’s long-time friend and colleague, Yoel Rappel. The ceremony came with moving speeches and testimonials by Chesler, Matthew Bronfman, Rabbi David Stav, MK Eli Ben Dahan, retired generals Chaim Erez and Ephraim Lapid, and Yoel Rappel. 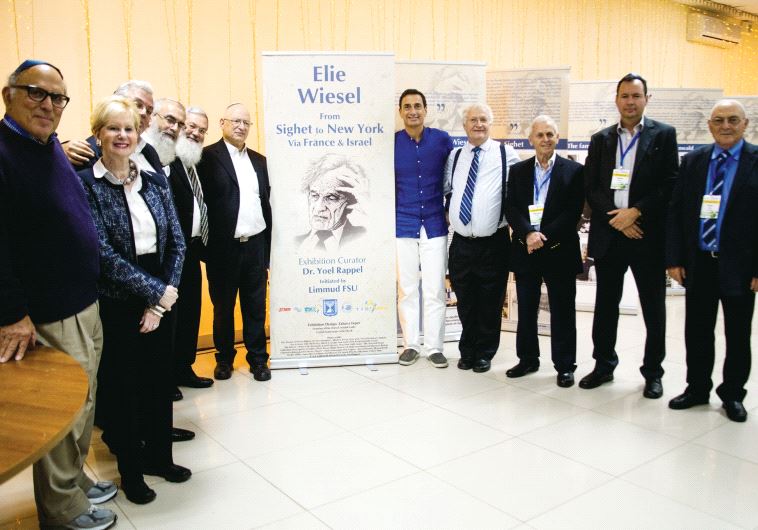 The dedication of an exhibition honoring Elie Wiesel, curated by Yoel Rappel (photo credit: SARAH LEVI)
The touching homage to the past and to a revered deceased writer and Jewish figure allowed for a bittersweet transition into the night’s open-air concert of a selection of Jewish music from the local Pushkin Klezmer band, Israeli band Simcha, and The Shuk and Ahava from Kazakhstan.Old and new friends of all ages danced and enjoyed the festive atmosphere under the stars as the lively music pumped through the speakers in this sleepy village hotel in Tatarstan.Observing the mass of happy, dancing concertgoers during the concert, Tatiana Pashaev, the project manager for the event, said, “This is the main goal – for people to come together and feel like they belong. This event has proven more successful than the previous year’s event because it has more people from diverse parts of the region.”Sunday concluded the events of the second annual Limmud conference in Kazan, but the work of the organizers and volunteers is far from over. Having made huge strides in creating a sort of renaissance of Jewish culture in the former Soviet Union, its schedule is jam-packed, quickly moving on to a conference in Toronto, followed by upcoming events in Sydney, Eilat, Lviv, St. Petersburg, Moscow and more.