Who was Walter Christaller, and why do so many still deem it necessary to whitewash his employment under Heinrich Himmler?

By SETH FRANTZMAN
AUGUST 27, 2010 16:54
Walter Christaller 311
(photo credit: Creative Commons)
Advertisement
“People have become too easily satisfied with slogans about the power that is to be found in a space, or that emanates from it, about the narrowness of space, the domination of space, the magic of space. Space is not a sorcerer or a supernatural being.” – Walter Christaller as quoted by David Blackbourn, The Conquest of Nature: Water, Landscape and the Making of Modern Germany “Germany’s student body is on the march” – Martin Heidegger, 1933 Walter Christaller died quietly in his home at Jugenheim, Germany, on March 9, 1969. He was 75 years old. To judge by the outpouring of grief in American academic circles, it becomes clear this was an important and well liked man.Brian Berry and Chauncy Harris wrote an “appreciation” in the journal American Geographical Society. In it they described how Christaller “as a child longed to travel.” In 1983 an even more sycophantic article was published in the Annals of the Association of American Geographers by Ruth Hottes entitled simply “Walter Christaller.” According to her, “Walter Christaller needs no introduction in the United States.” She described how he was “ignored in his native country for a long time, but his ideas had an early impact upon the thinking of geographers in the United States and Sweden. It was only in old age that Germany recognized his achievements with honors and awards.” 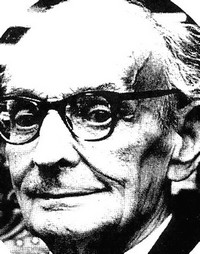 The only member of Christaller’s circle to be indicted at Nuremburg was Konrad Meyer, who was convicted of being a member of a criminal organization but not of war crimes and crimes against humanity. Sentenced to time served, he had been arrested in 1945, he was released and continued his academic career as a professor of planning at the University of Hanover.The subject of Nazism’s corruption of the academy and the role of academics in the Third Reich has been explored by scholars and writers. However, what has never been fully understood is why so many of the academics who enthusiastically joined the Nazi Party and worked for it were never held to account, either in a court of law or in the court of public opinion. What does it say about the academy in the West which speaks so much about “freedom of speech,” and the “requirement to critique” that the postwar role of Nazis in academic institutions and in shaping modern day discourse has not been explored?