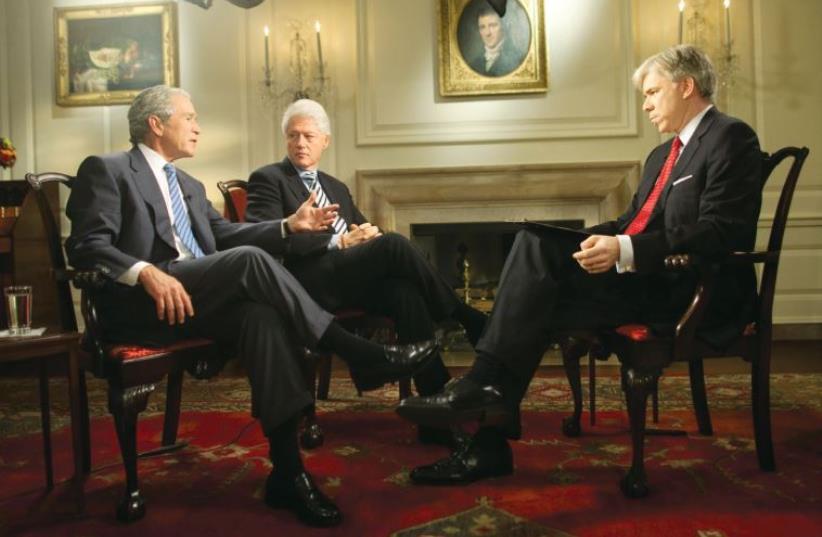 So was it a conscious decision to leave Israel out of the book? It was just not very central to my journey.While I describe that meeting with Peres in Yad Vashem, I just didn’t include everything [in the book]. There is no other reason except that certain things were left out.As a Jew, there is no doubt in my mind about the importance of Israel to a religious Jew, there’s no question about that.But as a modern person, and a Jew living in America, I do strive to make Jewish spiritual growth, and not Israel, the centerpiece of my faith.

You discussed how George W. Bush came under criticism for being perceived as making faith-based decisions as president. As part of the deeply skeptical worlds of journalism and politics, did you feel such criticism as well? I don’t think a person of faith in the media is going to be clouded in judgment as a journalist. I think we understand as journalists what our job is. If you’re interviewing the prime minister, your own religious views aren’t going to cloud how you question him and how you pursue answers to certain questions.I never felt like I would be subject to that at all, but I do think that there could be a little bit more of an understanding in the secular world and in the secular press about the role that faith can play in a leader’s life.

George W. Bush is a strong character in the book, not just because he provided the title, but he also was a big part of your career and even your spiritual process. Have you spoken to him since he left office? Did you reach out to him while writing this book? Yes, I have and I did. I have sent him the book and I know he’s read it. I don’t think he’s expecting royalties for me using his question for the title.I’d never covered politics before covering president Bush, and I covered him for eight years and I really got a sense of him. The question that he asked me was so personal and so penetrating – and not at all inappropriate. He’d heard that I was studying with an Orthodox scholar and was trying to deepen my faith and he was supportive and talked about his own journey.The biggest headlines about the book over the past few weeks have focused once again on your somewhat messy departure from ‘Meet the Press’ and NBC. Are you worried that will overshadow the message of the book? I knew people would be interested in these questions – media covering media seems to be of interest. But I think what’s more important to people who might be reading the book is how I internalized a very disappointing exit from a very public job, and how it strengthened my faith. I would say it grounded me more in faith... I really did struggle when I left NBC, with this question of who am I and what’s my identity. It was a pretty big blow to lose my job and feel like I was losing my career at that time.I’m not worried about that as a distraction, and, as I said, I had a lot of great experiences at NBC and I’m grateful for them.What’s next for you? I am a journalist, I love journalism, I love doing interviews, I love covering politics – but I’m also passionate about this faith journey, and I would love that to be a bigger part of my journalism. I’m having a lot of interesting conversations right now and figuring out what the right next step is.