The IFCJ and local organizations team up to provide children with school knapsacks. 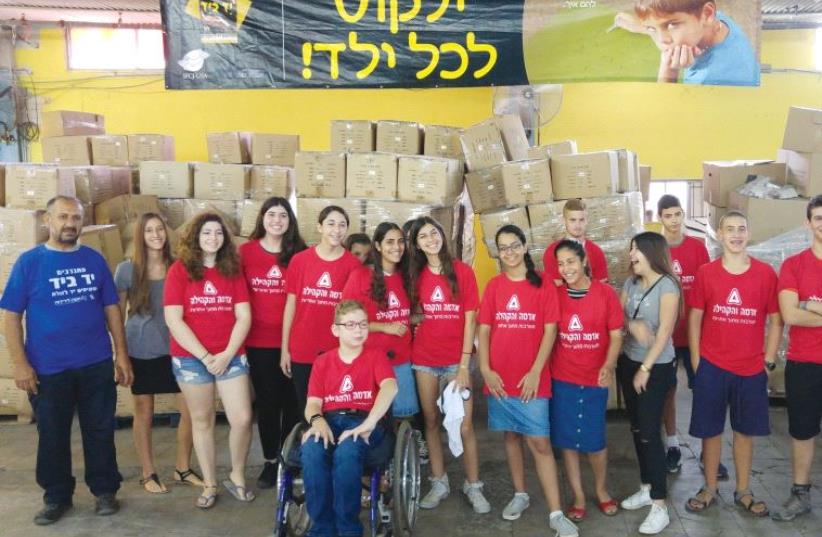 A generous outpouring of support. Donations of used backpacks are so plentiful they filled a warehouse
(photo credit: IFCJ)
Advertisement
At the beginning of the 2016- 2017 school year, the average parent will dole out NIS 1,300 for a knapsack, schoolbooks and writing utensils for each child – and this is with the “Free Education Law.”According to the National Insurance Institute’s latest report on poverty, 22 percent of Israelis and 31% of the children in the country are considered poor.

Without a coherent national plan to reduce poverty or any long-term goals to fight this phenomenon, the situation is not likely to improve significantly in the coming years.Six-year-old Amber (not her real name) is starting first grade this year.Her parents work in the public sector and they can barely keep their head above water financially. They start the month with a large overdraft already in their bank account, and by the end of the month the overdraft has only grown.Mixed with the excitement about the first day of school is an anxiety dampening the spirits of many parents and children.“I never thought I would be in a situation like this,” says Amber’s mother, “that I would have to ask Grandma to buy her a knapsack, because it costs too much for us.”Amber is not alone. In fact, there are so many in this situation that without private initiatives and individuals taking it upon themselves to help out, a feeling of hopelessness would be more prevalent.
Students hold up sign reading "Welcome to first grade" (photo credit: MARC ISRAEL SELLEM)
YARON LEVI, a well-known social activist in Bat Yam, is married to Or-Tal and is a full-time father to Ariel, five, and Evyatar, two. In the last two years he has turned into a one-man volunteer organization to collect and distribute knapsacks for schoolchildren. The name of his project is “A Backpack for Everyone.”“I didn’t invent the wheel, I just gave it a push so it would move in a specific direction,” Levi says. The first request that gave Levi the drive he needed was from a mother of four.“Hi Yaron. I would be glad if you could collect for me used knapsacks and school equipment for my children. Unfortunately this year I won’t be able to buy for them,” she wrote.In response, Levi posted a Facebook post to his friends: “I’d appreciate it if anyone who has a knapsack that isn’t being used would contact me,” he wrote.“Right away I thought about Ariel, my eldest daughter. How can I, as a father, send my child to kindergarten or to school with a shopping bag?” he asks. Shortly after, the second request came: “I saw the initiative you started. Can you bring me three knapsacks? I’m too embarrassed to come get them,” one mother wrote on a note she had left in her child’s drawer in his kindergarten classroom.“It devastated me. The poverty isn’t roaming in the forests, it exists here, right next to us – it’s silent and embarrassing. But I don’t think there is a reason to be embarrassed. We live in a country where we are obligated to be responsible for each other.”Levi’s original post garnered more than 3,000 shares. He stepped up his initiative and announced that he would be collecting used knapsacks in several locations. A few days later, Levi’s storage spaces could no longer take in any more knapsacks, and his cellphone line couldn’t handle all the calls and text messages that he was receiving. In a period of two weeks, he collected more than 1,500 knapsacks via his friends and their network of contacts from Facebook. 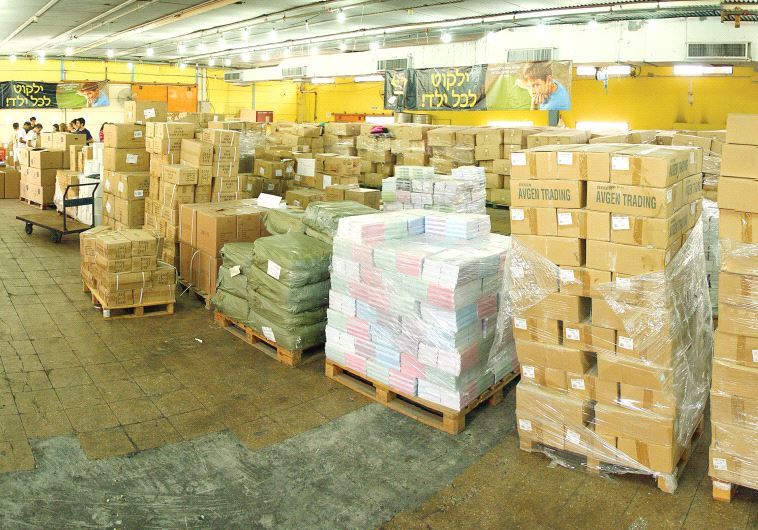 Boxes and boxes of backpacks to be delivered to families in need (photo credit: IFCJ)
This year Levi made a concerted effort to better organize the initiative, asking ahead of time for help from other social activists, regional councils and schools.“We organized 20 collection points, and again citizens pleasantly surprised us. Hundreds of groups and individuals from around the country who wanted to donate children’s knapsacks reached out to us,” he says.“Today we have a list of 120 people who are interested in leading this project in their hometowns, and every day I have hundreds of people reaching out to me saying they want to donate and to help out.”But the most significant group that reached out to Levy came last month, when a representative from the International Fellowship of Christians and Jews asked if it would be okay to direct those who wanted knapsacks directly to Levy.“My answer was: ‘Friends, I need help. I have hundreds of people calling me every day, I can’t handle the pressure.’ So we arranged a meeting. Two days after the original phone call I drove to Jerusalem to the IFCJ’s hotline center and we arranged a procedure to work together. I was happy to see that everyone in the center – about 40 people – knew my name. Suddenly I understood that there is something here bigger than me. I was surprised to see that [IFCJ founder and president Rabbi Yechiel] Eckstein’s wife Joelle was handling calls just like everyone else.”LEVY, A former Israeli judo champion and member of the national judo team, is a philosophy and social sciences student, and the owner of a fitness center in Holon. In recent years, he has been active with the Yesh Atid party in addition to his social volunteering.His volunteer work began five years ago with a number of local projects in Bat Yam. He established a group that renovates the houses of elderly people and a program that helps Holocaust survivors tell their stories to youth, among other programs.“Two years ago, during Operation Protective Edge, I understood the tremendous power that a community has, and together with a bunch of friends we succeeded in raising funds for four trucks full of equipment and food that were distributed to the soldiers on the front lines.“These initiatives led me to realize that there is a strong society in our country that knows how to come together to help out. There are no preconditions. From my perspective, anyone who asks for help will get help.”This type of charity is well known to Rabbi Yaakov Globerman, the head of the Yad B’Yad (Hand in Hand) charity, which was established 16 years ago with basketball star Pini Gershon to help thousands of needy families.Yad B’Yad caters to the needs of the most desperate citizens of Israel – Holocaust survivors, single parents, handicapped veterans, lonely elderly and new immigrants. Without Yad B’Yad’s critical aid, supported by funds from the IFCJ’s generous donors, these recipients would be without help and hope. Based in Lod, a city that has been ravaged by crime and drugs in recent years, Yad B’Yad provides needy people throughout Israel with food, furniture, clothing, shoes, beds, blankets, and winter coats. 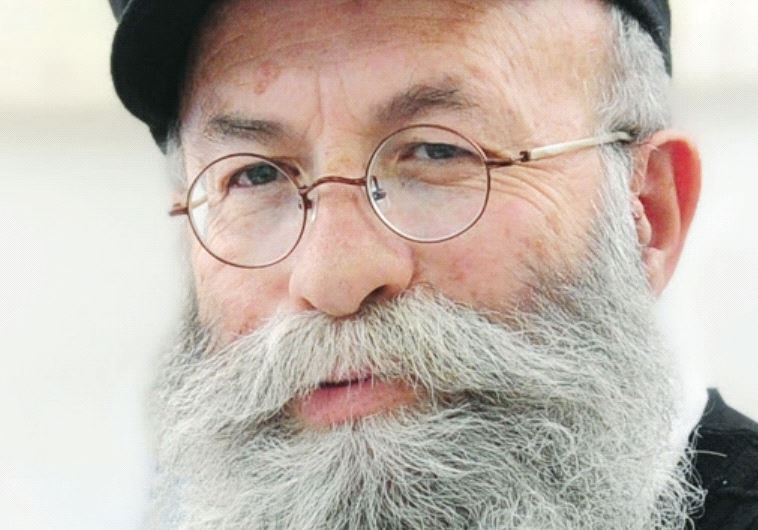 Rabbi Yaakov Globerman is the head of the Yad B’Yad charity (photo credit: IFCJ)One of Globerman’s projects is “A Backpack for Everyone,” which is financially supported by the IFCJ.“The IFCJ really helps out. They donate a lot,” he says. “This year we are giving out 25,000 new knapsacks and writing sets, which include a pencil case, pens, pencils, notebooks and even wrapping paper for books and notebooks.”One year, a principal in southern Israel contacted Globerman on the first day of school after noticing that a pair of brothers didn’t come to school on the first day of classes. After visiting them in their home and speaking with their mother, he understood that the children weren’t interested in coming to school because they had old and tattered knapsacks. Their mother wasn’t able to buy them new bags, but the next day, Globerman arranged for them to receive new knapsacks.Rabbi Eckstein sees education as key to the social development of a country.“Education allows children who are growing up in impoverished backgrounds to build for themselves a better future, despite the circumstances into which they were born.”Globerman and Yad B’Yad held the distribution of the bags this year in the first week of August with the help of social workers across the country.“The beginning of the school year is a holiday for the children, and we ensure that this holiday will make all the children happy, walking to school proudly, with their heads held high,” says Globerman. Translated by Benjamin Glatt.