8 questions for the Philippines' ambassador in Israel 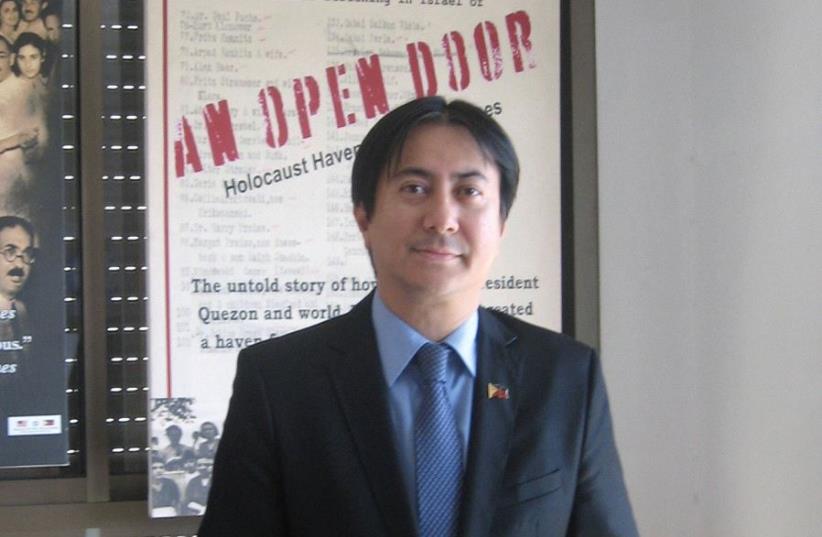 Philippines Ambassador Neal Imperial
(photo credit: CARL HOFFMAN)
Advertisement
Sometimes it feels like everyone hates us.We are surrounded by hostile neighbors, most Arab countries want nothing to do with us – so much so that they won’t even allow Wonder Woman to be shown because it stars an Israeli actress. European countries aren’t fond of us either; even Sweden, which famously loves everyone, somehow finds reasons to dislike us. It seems that hardly a day goes by without some branch of the UN condemning us and passing resolutions against us.It is nice to know, then, that there is one country that has consistently been our best friend in Asia and one of our best friends in the world.
Read More...
Israel and the Philippines are celebrating an anniversary throughout 2017: 60 years of close bilateral diplomatic relations. A full slate of commemorative activities is planned, as well as intergovernmental efforts to make the relationship closer and more profitable for both countries.Metro sat down recently with Ambassador Nathaniel “Neal” Imperial at the Philippine Embassy in Tel Aviv. The 48-year-old diplomat greeted us in the Quezon Room, lined with photographs and other memorabilia of former president Manuel Quezon and his heroic efforts to provide a safe haven in the Philippines for European Jews fleeing the Holocaust.Of all the places you could have been posted to, how did you find yourself here in Israel?I’m fortunate that after I was posted to Singapore for six years – I was consul-general there – I was recruited to work in our Department of Foreign Affairs’ Middle East and African Affairs office, where I became executive director, handling Israel and other countries of the Levant. That was my introduction to Israel and our relationship to this country.I guess that I’m also lucky because after handling our relations with Israel for about two and a half years, I was recruited to become the ambassador here. This is my first ambassadorial posting. I’ve been here now almost three years.What is the Philippines’ position on the conflict between Israel and the Palestinians? The focus of my work here is to cultivate bilateral relations with Israel. We have another ambassador whose jurisdiction is the Palestinian areas, so I don’t really have to talk to the Palestinian Authority in my posting here. We have good relations with both sides. We have, of course, our own policies and our own priorities. We focus on different areas with regard to our relations with both, but my job is to focus on our relations with Israel.That said, are there any plans to move your embassy from Tel Aviv to Jerusalem? First let me begin at the beginning. In 1947 we were the only Asian country that voted for the United Nations partition plan that created the State of Israel, and we have recognized the Palestinians as well as the Israelis. We have always supported the two-state solution. Part of that support includes the eventual recognition of the capitals of both the Palestinians and the Israelis. As of now, that issue remains unresolved, so we have the same position as almost every other country on this; that is the reason our embassy remains in Tel Aviv for now.Once the matter is resolved by both sides, I’m sure we will make the right decision about whether to move, and where to move. As of the moment, we do have an honorary consul in Jerusalem, and his office is in west Jerusalem. That is my long answer to your short question.