"We cannot forget for a single minute that Iran threatens every day to annihilate Israel," said the Israeli prime minister

By REUTERS, HERB KEINON
Russian President Vladimir Putin (R) meets with Israeli Prime Minister Benjamin Netanyahu in Sochi, Russia August 23, 2017.
(photo credit: SPUTNIK/ALEXEI NIKOLSKY/KREMLIN VIA REUTERS)
Advertisement
Iran's growing role in Syria poses a threat to Israel, the Middle East and the world, Israeli Prime Minister Benjamin Netanyahu told Russian President Vladimir Putin on Wednesday."Mr. President, with joint efforts we are defeating Islamic State, and this is a very important thing. But the bad thing is, that where the defeated Islamic State group vanishes, Iran is stepping in," Netanyahu told Putin during talks at Russia's Black Sea resort of Sochi."We cannot forget for a single minute that Iran threatens every day to annihilate Israel," Netanyahu said. "It (Iran) arms terrorist organizations, it sponsors and initiates terror."Netanyahu also said that "Iran is already well on its way to controlling Iraq, Yemen and to a large extent in already in practice in control of Lebanon."Iran denies sponsoring terrorism.Putin, in the part of the meeting to which reporters had access, did not address Netanyahu's remarks about Iran's role in Syria.Prime Minister Benjamin Netanyahu arrived in Sochi on Wednesday for a meeting with Russian President Vladimir Putin, his fourth visit to Russia in the last 16 months.For reporters who cover Netanyahu, the drill is well known.Following the premier’s meeting with Putin, either he or one of his spokesmen will say that during the meeting he stressed Israel’s red lines in Syria: that Jerusalem will not tolerate an Iranian or Hezbollah presence on the Golan border; that Israel will not accept a permanent Iranian presence in Syria; and that Israel will act to ensure that game-changing weapons or capabilities are not transferred from Iran through Syria to Hezbollah in Lebanon.Netanyahu will be careful to praise the Russian-Israeli bilateral relations, and say that the deconfliction mechanism to prevent any accidental engagements between the Russian and Israeli air forces in Syrian skies – which he set up with Moscow immediately after Russia became militarily involved in Syria in 2015 – has proven itself very effective.He will be careful not to say what the Russian leader’s response to any of this was, beyond saying that the Israeli messages were “understood.” 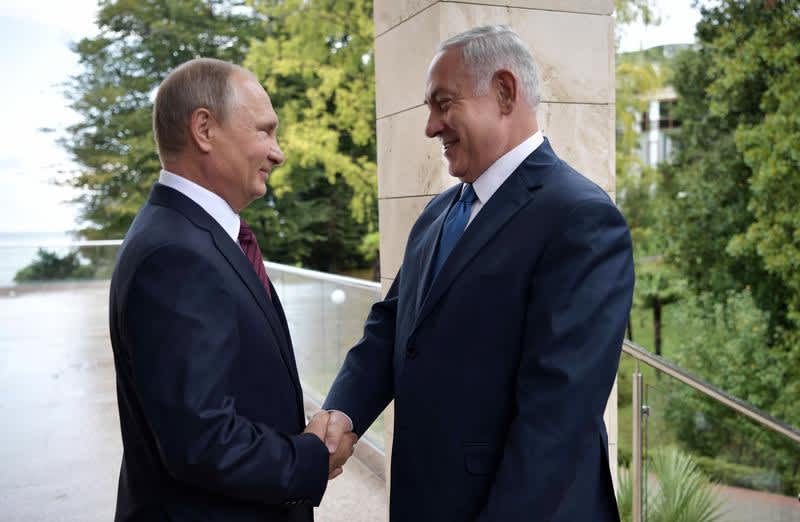 Russian President Vladimir Putin (L) welcomes Israeli Prime Minister Benjamin Netanyahu in Sochi, Russia August 23, 2017. (Credit: Sputnik/Alexei Nikolsky/Kremlin via REUTERS)But these meetings are by no means a Netanyahu monologue. The Russians also have their position regarding Syria and overall Iranian intentions, and – based on a number of conversations with senior Russian diplomats – it goes like this: Russia has genuine interest in Syria. Raqqa, the one-time Islamic State stronghold in northern Syria, is only 1,000 kilometers, or 620 miles, from Grozny, Chechnya, in southern Russia, the distance from New York to Knoxville, Tennessee.When Moscow decided to become actively engaged in the fighting in Syria in the summer of 2015, there was a real danger that Islamic State and a collection of other rebels would overthrow the government in Damascus, and the country would fall under the sway of forces downright hostile to Russia – someone like Islamic State leader Abu Bakr al-Baghdadi – who might then want to begin efforts through Chechnya to destabilize Russia.Some 4,500 Russian citizens are fighting against the Islamists in Syria, and have not concealed their desire to fight the “infidels” at home – meaning in Russia – once victory is achieved in Syria and Iraq.Unlike the US forces that invaded Iraq in 2003, or the international coalition that launched airstrikes against Libya in 2011, Russia was invited into Syria by the recognized government of Bashar Assad. Therefore, Russia – unlike the US and the international coalition – is in accordance with international law by acting inside Syria at the invitation of the legitimate government.If there is a mess in the Middle East, it is not because Russia moved into Syria, but rather because the US moved into Iraq, and then the West took action in Libya unleashing all kinds of destabilizing forces throughout the region. The US says that the aerial campaign against Libya was a great success, ousting a brutal dictator in Muammar Gaddafi – but what kind of success? Huge amounts of military hardware was pillaged, and vast amounts of weaponry and even chemical substances have spilled over into neighboring African countries as well as into the hands of Jihadi groups. Niger and Mali were destabilized because of what happened in Libya.Russia listens to Israel’s concerns about Iran, but views them as overstated. Iran will not attack Israel, because it knows that to do so would be suicidal.Israel and the Saudis say that Iran is trying to encircle them with proxies stretching from Yemen through Bahrain, Iraq, Syria and Lebanon, but the truth is that the Iranians feel threatened and encircled by Israel, the Saudis and the US.True, Israel does not threaten to wipe Iran off the map, but why has it bought a fleet of F-35 stealth bombers? Whom is that intended for, if not Iran? Moreover, the US talks openly about Iranian regime change. Even the nuclear deal – the Joint Comprehensive Plan of Action reached in 2015 – is seen by the Americans as a way of “empowering the moderates “ to slowly edge out the ayatollahs.Iran’s actions in Syria are not designed to destabilize the region but rather to protect themselves, to push back and take the battle to the enemy, rather than waiting to become encircled themselves.We, the Russians, understand Israel’s concerns about game-changing weaponry being transferred from Syria to Hezbollah, and we acknowledge Israel’s right to defend itself. But Israel cannot unilaterally take it upon itself to regulate relations between other sovereign states – it is not the regional sheriff.We, the Russians, also understand Israel’s concerns regarding Iran establishing a permanent presence in Syria, but we cannot prevent it. Iran is a sovereign state; we can’t tell Tehran what to do or how to behave. We might counsel against it, but they will not necessarily listen to us. We don’t make the decisions for Iran.Iran is inside Syria because Assad invited them in. The same is true of Hezbollah. The Iranians and Hezbollah came in when Assad’s back was against the wall. It is now in Israel’s interest for Assad to retain strong control of his country, so then there will be no need for the Syrians to invite in outside forces. The best thing for Israel would be a strong government in Damascus that will not need Iranian or Hezbollah help. Israel should be working with the forces to empower Assad.To Israeli ears, much of the above sounds almost delusional. Nevertheless, that is the Russian message, one that their diplomats espouse consistently in private conversations, and one that Netanyahu has heard in various forms more than once. He will also likely hear a variation on this theme again from Putin when they meet Wednesday in Sochi.