Analysis: The unlikely victims of the Arab Spring?

Syria, Hezbollah and Iran all stand to lose from regional upheavals.

By ZVI MAZEL
DECEMBER 11, 2011 09:29
Ahmadinejad scolds child 311
(photo credit: REUTERS)
Advertisement
Last week saw Iran’s staunchest allies squirming on television. President Assad of Syria tried to enlist Barbara Walters while Hezbollah’s leader Hassan Nasrallah briefly got out of his bunker to comfort his worried militants.Though there is nothing to indicate that the move was a concerted one in view of the military alliance between the two, it does show that both men are acutely aware of the fact that the turmoil in Syria endangers them and also their patron, Iran, while Shia influence wanes in the Middle East.RELATED:
'Post-Assad Syria would drop special Iran ties'There was something pathetic in the desperate efforts of the two leaders to pretend that all was well. Assad made a fool of himself by earnestly declaring in face of the evidence that it was not his forces that had killed unarmed protesters and that only a crazy man would massacre his own people.One wonders whether he is blind or does not want to see. Casualties are piling up, resistance is not abating and he can’t stop it. Does he believe that the tide can be stemmed forever? Has he become a tool in the hands of a military junta led by his brother Maher whom some call a ruthless murderer? Though Assad was desperate to enlist world public opinion against the sanctions which are beginning to bite, he did not indicate by one word that he was ready to quit or to start talking with the opposition.A few days later he said he was ready to accept the Arab League ultimatum – withdraw his troops from urban centers and let in observers to check on the situation in Syria – but only if the League canceled its sanctions. 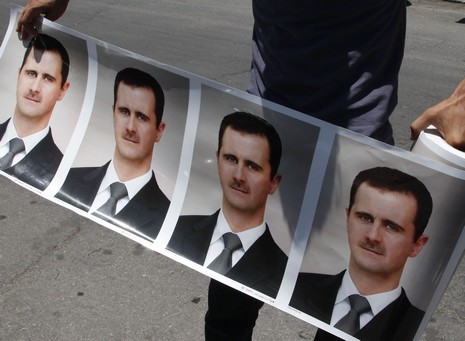 In any case, it appears too late to talk, the opposition being united in its call for Assad’s departure. While the protests go on, there is now a “Free Syrian Army” made of deserters from the regular army – officers and enlisted men – and numbering a few thousand men.It seems, at least at that stage, that the Syrian army is not in danger of disintegration.Assad is using mainly regiments belonging to his own Alawite minority and as such fanatically devoted to the regime.Yet the combined effects of the protests, the attacks of the Free Syrian Army and international pressure are taking their toll, while the country’s economy unravels.There is an all too real risk of civil war which could lead to Syria being torn apart along ethnic and religious lines. That may be why the Sunni middle class and the Christian and Kurdish minorities are not keen to join the fray. Such is the case in the city of Aleppo, with its two and a half million mainly Sunni inhabitants, who have so far remained on the side lines. Hamas is reportedly considering leaving its Damascus headquarters for safer pastures. Interestingly, Russia and China are still behind Assad – realpolitik and economic interests being at work – but for how long? Syria’s neighbors are increasingly worried.Relations with Ankara are going from bad to worse; Turkey is letting opposition movements such as the Syrian National Council and the Free Syrian Army operate from its territory, and threatens to set up a security zone along its border with Syria to protect civilians living there; it has already implemented sanctions against its neighbor.This led Assad to close a number of border crossing and to impose a tax on goods transiting through Syria on their way to Turkey.Iraq, careful not to anger Iran while maintaining its close ties to the United States, is being cautious: It says it is in contact with opposition leaders (without naming them) but is against sanctions and supports the efforts of the Arab League.Jordan is doing all it can to stay neutral in order not to anger Damascus and to preserve its vital trade with its powerful neighbor.In Lebanon, opposition leader Sa’ad Hariri is saying openly that Assad is on his way out – peacefully or not.A wary Israel keeps silent, fearing that the dictator at bay might launch his missiles against the hated neighbor while enjoining his Hezbollah ally to follow suit. An ally which does not feel so secure right now.On the occasion of the recent Ashura celebrations in Beirut, Nasrallah made a rare appearance and hastened to go back to his bunker to deliver a blistering attack via video on – you guessed it – the US and Israeli dastardly plot against Syria conducted despite the fact that Assad was trying to implement reforms. He told militants who watched on huge television screens that Israel would pay the price of the changes taking place in the Arab world.There was nothing new there, nothing to comfort his supporters, especially after the head of the Syrian National Council had declared that after the fall of Assad, Syria would cut off ties with Hezbollah and would open negotiations to regain the Golan Heights by peaceful means. Nothing either to explain why the whole world and the Arab league were siding with the protests against Assad.Another indication of Nasrallah’s waning influence is to be found in the fact that a few days ago, he had to accept the decision of the Lebanon’s Mikati government – a government he helped set up – to pay its share of the cost of the proceedings at the Special Tribunal for Lebanon investigating the assassination of Rafik Hariri – a court which has already issued warrants against four high-ranking Hezbollah officers. Najib Mikati had threatened to resign if Nasrallah blocked the move. Yet barely a year ago Hezbollah brought about the fall of the Sa’ad Hariri government over that very issue. Today Nasrallah had to swallow the bitter pill.Hezbollah, with its tens of thousands of missiles, nevertheless remain a very real threat to Israel – as long as armaments keep flowing in from Syria. Should that flow come to a sudden halt following a change of regime, it would be a near mortal blow for the organization, which finds itself increasingly isolated inside Lebanon. We are not there yet.What is clear is that Iran suffered a serious setback in its avowed policy of exporting its brand of Shia Islam revolution throughout the Middle East. Should Syria fall, Iran’s bridgehead in the region will fall as well, and with it the network of finance and armament keeping Hezbollah afloat.As for the new Sunni regimes born of the popular uprisings, they might not be too keen on collaborating with a fanatic Shia regime striving to acquire nuclear weapons.There is another considerable unknown: the opposition in Iran. Will the winds of changes blowing in the region spur it into renewed activity? This must be the question the ayatollahs are wrestling with today.The writer, a fellow of The Jerusalem Center for Public Affairs, is a former ambassador to Romania, Egypt and Sweden.
Advertisement
Subscribe for our daily newsletter