With eyes on Washington, Cairo and Riyadh warm up ties, looks to cooperate

Both Egypt and Saudi Arabia share a sense of satisfaction with the advent of the Trump administration, which they see as reversing Obama policies that harmed them. 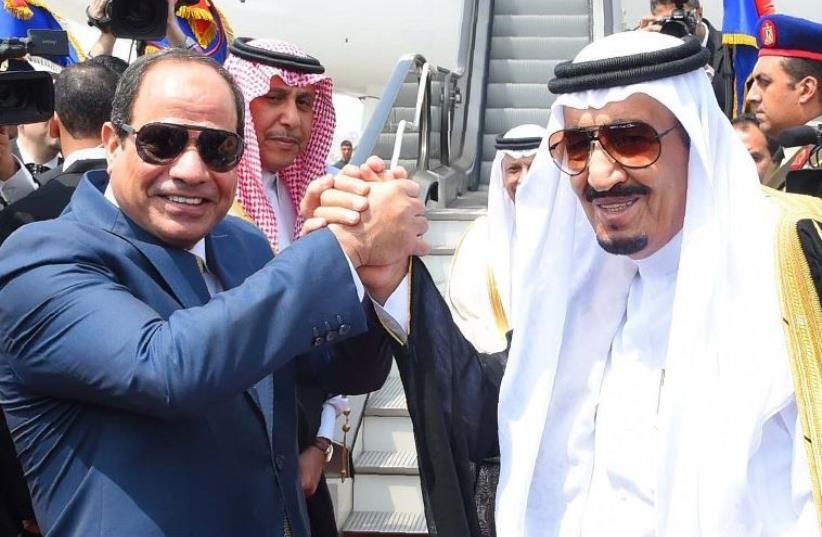 Egyptian President Abdel Fattah al-Sisi (L) and Saudi King Salman
(photo credit: AFP PHOTO)
Advertisement
Relations between Egypt and Saudi Arabia are closing after months of tension, as the two most important Sunni Arab states in the region appear to be overcoming differences and looking ahead to cooperation with the Trump administration.The improvement was notable in the statements about Egyptian President Abdul Fatah al-Sisi’s meetings in Riyadh on Sunday with King Salman and a separate meeting between Egyptian Foreign Minister Sameh Shukri and his Saudi counterpart Adel Jubeir.Jubeir was quoted by al-Hayat newspaper as saying, “We spoke about the firm bilateral relations between the brotherly countries and how to support them in the coming period in all aspects economic, cultural, medical, educational and developmental… Egyptian-Saudi relations are deep, strong, historic and strategic and will increase in their strength and fortitude.”The statements contrasted a media war of words between the two countries and the cutting off of subsidized Saudi- oil shipments to Egypt in October after Egypt voted in favor of a Russian draft resolution in the UN Security Council that did not call for a halt to Russian and Syrian regime bombardments of then encircled Aleppo. The Egyptian vote reflected deeper differences with Saudi Arabia over Syria policy, with Cairo amenable to a solution leaving Bashar Assad in power and Riyadh adamant about his removal.In a sign of the thaw, the oil shipments were resumed in March to coincide with a meeting between Sisi and Salman at the Arab summit hosted in Jordan. In addition to the tensions over Syria, relations had suffered over Egypt’s refusal to meet Saudi requests that it take up a substantial military role backing Riyadh in its conflict with Iranian-backed Houthi rebels in Yemen, an involvement that has turned into a major quagmire for the Saudis.The greatest tension in recent months, however, stemmed from uncertainty about whether Egypt would follow through with an agreement to transfer sovereignty over two islands at the mouth of the Gulf of Aqaba – Tiran and Sanapir – to Saudi Arabia.The agreement was made by Sisi in the context of a series of Saudi-Egyptian agreements in April 2016 that were to translate into an estimated $25 billion worth of Saudi support for the Egyptian economy.Closer relations between Saudi Arabia and Egypt are in Israel’s interest, because it boosts the moderate Sunni axis competing for primacy in the region with Iran. Cooperation is also essential if the United States is to succeed in organizing a regional peace conference that would lead to renewed Israeli-Palestinian negotiations.“They basically see eyeto- eye on the Palestinian question and Trump administration efforts at a regional conference,” said Joshua Teitelbaum, senior research associate at the Begin-Sadat Center for Strategic Studies at Bar-Ilan University. “They both see a conference as possible, but think it takes a lot of preparation.”The improving relations are being spurred at least in part by a desire to present a common Arab stance to the new Trump administration.“The US is a factor,” says Mira Tzoreff, an Egypt specialist at Tel Aviv University’s Dayan Center. “They have quite a good reason to solve the problems between them if they want to have a united and coherent force of Sunni moderates against Iran and Daesh [Islamic state]. They have quite good reason to improve relations and gain United States assistance. They need to work together for that.”Both Egypt and Saudi Arabia share a sense of satisfaction with the advent of the Trump administration, which they see as reversing Obama policies that harmed them. Sisi basked in being welcomed to the White House last month as the legitimate ruler of Egypt after the Obama administration had kept its distance and in the Egyptian view was sympathetic to the Muslim Brotherhood. The Saudis are delighted with the Trump administration’s staking out a tough posture on Iran after being dismayed by the 2015 nuclear deal spearheaded by Obama.Commentator Ghassan Shirbil wrote approvingly in the Saudi-owned al-Sharq al-Awsat Sunday: “We are facing an American administration that holds Iran responsible for shaking the stability of the region and which doesn’t hide its desire to work with Saudi Arabia, Egypt, and the moderate Arab countries to fight terrorism and extinguish fires in the region.”In an interview in the Washington Post last week, Saudi deputy crown prince Muhammad bin Salman gushed: “Trump has not yet completed 100 days and he has restored all the alliances of the US with its conventional allies.”The transfer of the islands had been derailed by public opposition in Egypt to the move and an Egyptian court decision in January that ruled the territory is Egyptian, not Saudi. The Saudis fumed at what they saw as Egypt’s reneging, and Saudi aid to Egypt was threatened.Early this month, however, an Egyptian court made another ruling that would enable the transfer.It now seems that the two countries have quietly found an accommodation about the islands, said Ofir Winter, an Egypt specialist at the Institute for National Security Studies, and Shukri, the foreign minister, hinted at this during the Arab League summit.“It seems that the transfer [of the islands] will be delayed for a period while they move ahead on building a bridge that will link Saudi Arabia and Egypt and on tourism projects,” Winter said.“The Saudis understood that, without the Saudi assistance, it would be hard for the Egyptian regime to run the state and that it is critical to Egypt’s stability so they agreed to be flexible to a certain extent.”