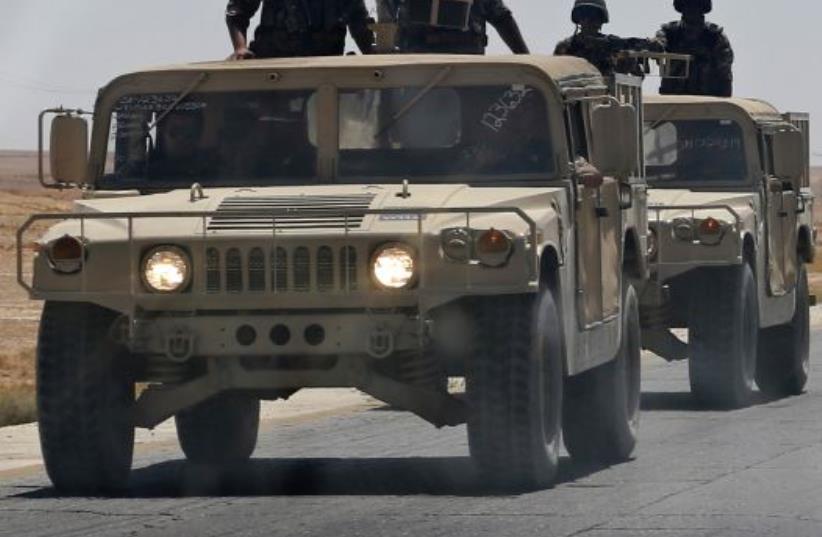 Twenty-seven Syrians trying to smuggle drugs across the border into Jordan died in firefights with the Hashemite Kingdom’s forces, Jordan’s military spokesman announced on Thursday. The soldiers were operating under modified rules of engagement announced by Maj. Gen. Yousef Huneiti, chairman of the Joint Chiefs of Staff of the Jordan Armed Forces, after an officer died in a gunfight with Syrian smugglers earlier this month.

Brig. Gen. Naji al-Manasir, head of the Eastern Command, told Jordan’s Al-Mamlaka public television broadcasting service that “the rules of engagement have been changed and the army will shoot anyone who dares to come close to the Jordanian borders.”

The army has declared a buffer zone on the border with Syria and, according to the new rules of engagement, no one is allowed to enter this area separating the two countries.

The death of Capt. Muhammad Yassin Musa al-Khudayrat, killed two weeks ago in a shootout with smugglers, has opened up discussion about the drug smuggling trade carried out by armed men coming from Syria. It also exposed the lack of security coordination between the two countries despite the recent warming of relations between Amman and Damascus. Jordan has accused Syrian elements of cooperating with Iranian militias and Syria’s elite 4th Armed Division, which is headed by Maj. Gen. Maher al-Assad, the brother of the president.

Jordanian Air Force Maj. Gen. (ret.) Mamoun Abu Nuwar told The Media Line that Jordan did the right thing. “They made the correct decision by changing the rules of engagement with the aim of discovering and engaging with the smugglers at an early stage. There is a no-man’s zone between the two countries where no one is allowed to enter. Jordan is now able to discover and deal with any smuggler entering that area as soon as they enter this zone,” he said.

A guard opens a door inside a prison that holds foreign prisoners, suspected of being part of the Islamic State, in Hasaka, Syria, January 7, 2020. (credit: GORAN TOMASEVIC/REUTERS)

Abu Nuwar said the Jordanian army has powerful electronic scanners that were supplied by the US. It also has helicopters and drones that use heat-seeking detection equipment in addition to night vision to be able to identify infiltrators. “With this system of detection, they are able to deter the smugglers while they are still in Syrian territory and defend the border,” he explained.

Jordan has been suffering from a rise in drug smuggling from Syria that aims to reach the Gulf countries. “A total of 6,196 people have been caught in drug abuse and drug dealing cases and 19,000 people have been involved in 12,815 drug cases” in Jordan between January 2021 and September 2021, according to Anti-Narcotics Department Director Hassan Qudah.

Brig. Gen. Ibrahim al-Jabawi., who defected from the Syrian Army, accused Hizbullah and the 4th Division, and the militias under their control, of producing Captagon amphetamine pills in the millions. “Hizbullah produces and exports those addictive pills in factories under the control of the 4th Division and Hizbullah within tobacco factories,” he told The Media Line.

Hizbullah is exporting those drugs to Arab countries, especially in the Gulf, he said. “It is known that Jordan has broken up dozens of attempts to smuggle drugs and weapons, all coming from the 4th Division headed by Maher al-Assad, which brings in a lot of money” for the smugglers, he said.

Last September, Huneiti hosted Syrian Defense Minister Ali Abdullah Ayyoub in Amman. The discussion focused on securing the border between the countries, the situation in southern Syria, and the effort to fight terrorist activities and stem cross-border drug smuggling.

Jordanian columnist Maher Abu Tair cited Jordanian military sources as identifying red zones where the drug dealers are based. He called on the Syrian authorities to fight these drug gangs.

“The Syrian state is unable to control its own territories and that is why these smugglers are able to produce and export these drugs to Jordan, Lebanon, Iraq and, most importantly, to the Gulf countries,” Abu Tair told the Media Line.

Drug dealers work with higher-up Syrian state officials who protect them, he said, adding: “This leads us to believe that there are large and mysterious powers within Syria or maybe even other parties within the larger regional drug business and even groups outside the drug trade.”

The danger this poses to Jordan cannot be ignored, he said. “This will drown Jordan with destruction due to addiction. Also, the threat to and the killing of Jordanian soldiers means that the red lines have been crossed,” Abu Tair said.

“Jordan’s northern and northeastern borders are becoming very dangerous. Security information from the other side of the border talks of very radical gangs that are connected to militias in other countries; this means both drug gangs and armed groups,” he added.

“Whoever supports these groups and their activities at this time, including giving them weapons and sophisticated gear such as night vision, forces Jordan to deter these groups without any hesitation in the defense of Jordan’s soldiers and citizens,” Abu Tair said.