Video posted to an Instagram account which claims to be the official account of the "Edalat Ali" hacker group showed footage allegedly from a control room in Iran's Ghezel Hesar Prison.

Video posted to an Instagram account that claims to be the official account of the “Edalat Ali” hacker group showed footage allegedly from a control room in the prison, with text and the icon of the group featured on television screens seen in the room. The video was later removed.

Ghezel Hesar Prison is one of the largest in the Middle East, according to a 2014 report by Human Rights Watch. Most of the prisoners are believed to have been convicted on drug-trafficking charges, according to the report.

A report by the International Society for Human Rights called the prison a “horror jail,” writing that it is “infamous – even in... Iranian comparisons – for catastrophic prison conditions.”

Edalat Ali also provided BBC Persian and Radio Farda with files related to the 2019-2020 Iranian protests, known as Bloody November, showing the charges and sentences of some of the detainees from the protests. BBC Persian was unable to independently confirm the authenticity of the documents. 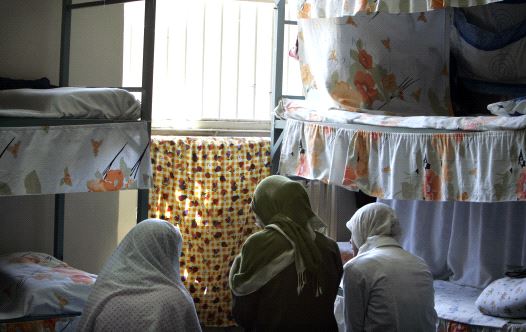 The details of nearly 2,000 detainees are featured in the documents, including the general charge, an explanation of the charge and the court verdict. The charges included gathering and colluding with the intention of committing a crime against the security of the country, propaganda activity against the Islamic Republic, disruption of public order and rebellion and insult to agents.

The punishments ranged from three months to 10 years in prison, floggings, fines and community service. One person was sentenced to a year in prison and 74 lashes because he “frequently appeared at the rally site on Piroozi Street and texted his relatives,” according to Radio Farda. Another person received a year in prison and 20 lashes for “parking a car diagonally across the area.”

The documents also feature a letter that Ali Bagheri Kani wrote to President Ebrahim Raisi when Raisi was the head of the judiciary, according to BBC Persian. In the letter, which describes Kani’s visit to Fashafouyeh Prison, he said a significant number of young people from low-income families “repented” and “claimed” they did not belong to a particular organization or group.

The prisoners also claimed that they were made to give forced confession and that they were treated with violence by a judicial officer, wrote Kani, asking Raisi to have these cases “specially” examined.

Another document provided by Edalat Ali is a “highly confidential” report by Mir Mostafa Seyed Ashrafi, deputy prosecutor and head of the District 20 Court for International Cases about “human rights trials against the Islamic Republic of Iran in Europe.”

The report details three trials: a people’s tribunal organized after the November 2019 protests; the trial of Hamid Nouri, who is accused of taking part in the execution of Iranian political prisoners in 1988; and the Iran Tribunal on the killing of political prisoners.

The trials “are mainly considered a show and propaganda move,” the report concluded, adding that “European courts appear to have paved the way for the trial and detention of Islamic Republic officials abroad, citing people’s tribunal.”

The report recommended documenting the damage caused by the November 2019 protests and for “unrelated persons” to refrain from commenting on the tribunals.

“Moments ago, we also hacked Ghezel Hesar Prison in Karaj to expose the regime’s oppression and repression in another dreadful prison and not to allow it to hide again,” Edalat Ali said in a statement to Radio Farda.

“All of us Iranians are political prisoners of this authoritarian regime, and we are turning this decade of Fajr into a decade of resumption of nationwide protests,” it said.

The “decade of Fajr” appears to refer to an annual event held in Iran to commemorate the return of Ruhollah Khomeini, the founder of the Islamic Revolution, after a period of exile.

Edalat Ali recently attacked the Telewebion site, which provides live broadcasts and archives of Iranian radio and television, disrupting service and replacing the broadcast with a video message saying, “Khamenei is afraid that the base of the system will shake,” and “They will not silence us anymore,” among other messages. After the attack, the Iranian Students News Agency reported that part of the website’s archives were no longer available to users.

The group also recently revealed a highly sensitive Islamic Revolutionary Guards Corps document that asserts Iranian “society is in a state of explosion” because of the crippling sanctions imposed on the nation due to its illicit nuclear program.

According to Radio Farda’s Golnaz Esfandiari, who authored the exclusive article, “The document covers a meeting with IRGC’s intelligence wing and quotes an official named ‘Mohammadi’ saying that Iran’s “society is in a state of explosion.”

In August, Edalat Ali published security camera footage it claimed shows the inside of Iran’s Evin Prison, where Iran jails and brutally tortures its political prisoners, according to Radio Farda.

One of the clips released showed the name of the group broadcast in a cyberattack warning on the screens of the prison’s control room.

Other videos showed wardens abusing prisoners, dragging them along the floor.

“Evin Prison is a stain on the black turban and white beard of Iranian President Ebrahim Raisi; nationwide protests until the release of political prisoners,” read a chyron on the screens in the control room, according to the report.

Evin Prison was placed under US sanctions in 2018 for “ordering, controlling, or otherwise directing, the commission of serious human rights abuses against persons in Iran or Iranian citizens or residents, or the family members of the foregoing.”

According to the statement by the US Treasury at the time, prisoners there are subject to brutal tactics, such as sexual assault, physical assaults and electric shock.

Raisi was identified by Amnesty International as a member of the Tehran “death commission” that sent thousands to their deaths at the Evin and Gohardasht prisons.

Benjamin Weinthal contributed to this report.