The Turkey-Lebanon nexus that may confront Netanyahu - analysis

The Turkey ties and the Lebanese mezze of problems are tied to wider challenges in the region. Netanyahu, if and when he forms a government, will need to deal with two potentially interlinked crises. 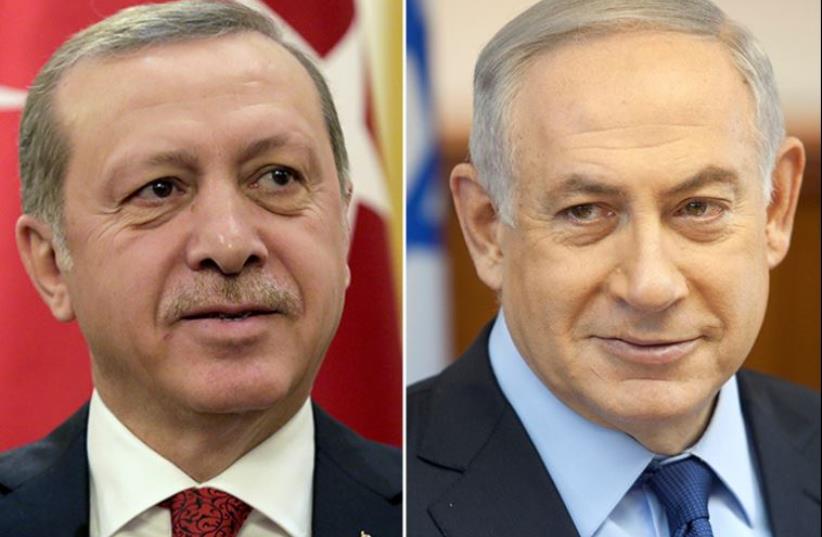 As Benjamin Netanyahu appears poised to return as prime minister, with an even stronger and potentially more stable coalition than in the past, he will face many foreign policy issues that he has dealt with before.

In many cases, these will be known quantities, such as close Israel-India ties, or managing the alliance with the US, working with the EU, the Abraham Accords and Greece and Cyprus.

However, two countries stand out as a nexus of problems: Turkey and Lebanon.

It’s worth mentioning before going on that obviously the Ukraine crisis and Russia’s invasion will be an issue for Netanyahu to deal with, but that is worth an entire discussion on its own. The Turkey-Lebanon nexus is an issue that is complex because the Lapid-Bennett government which is leaving office, has left Netanyahu with two pots on the stove.

Israel and Turkey renewed diplomatic ties during the outgoing government’s time in office and in the last year there have been many high-profile visits. These were an unprecedented number of visits for such a short time. Israel’s President Isaac Herzog went to Turkey, and the Turkish foreign minister came to Israel, then Israel’s defense minister went to Turkey. These visits marked the first time that many of these kinds of meetings had taken place for a decade or more.

Ankara has been one of the most hostile countries to Israel in the last decade. Ankara’s ruling AKP party compared Israel to Nazi Germany numerous times in 2018 and 2019. Ankara hosted Hamas terror leaders and reports in foreign media said Hamas planned attacks from Turkey. In addition, the Mavi Marmara flotilla, destined for Gaza, was organized by far-right extremists in Turkey. When the Abraham Accords were announced, Ankara tried to sabotage them by threatening to break relations with the UAE. Turkey also tried to meddle in Greece-Cyprus-Israel ties.

However, in the last year and a half, Ankara has felt that it has few friends in the West and in Washington. It has pivoted and sought to reconcile with many countries in the region, including the UAE, Egypt, Saudi Arabia and Israel.

The outgoing government was keen to renew ties. However, it did so much reconciling that it’s not clear if it followed the maxim “trust, but verify.”

Was Ankara using Israel merely to try to get influence in Washington, doing outreach to pro-Israel voices in the US so as to get favors on the Hill? What has Ankara done for Israel?

Turkey did detain Israeli tourists on trumped-up charges, something that Ankara often does with countries, threatening them and pretending to climb down so as to get back to “zero” and make it seem Turkey did something positive. In addition, Turkey has said it has prevented attacks on Israelis. But one might ask why Iranians or others threatening Israelis can operate in Turkey in the first place?

One thing is clear: When Netanyahu was in charge, his motto was “strength” and he never allowed Turkey to threaten Israel without responding in kind. Netanyahu was a keen supporter of the Kurds and was always willing to stand up to slander from Ankara. This lead to very bad relations, but those bad relations were not the fault of Jerusalem. Now there are new ties, but it is not clear if Ankara will be able to change its old habits of bashing Israel now that the Right is apparently coming back to power in Jerusalem.

Will Ankara use upcoming elections to turn on Israel and will Netanyahu respond, or will caution on both sides prevail? These are key questions.

At the same time, Turkey likely watched Israel’s decision to enter a maritime deal with Lebanon and wonders what that portends.

Turkey has been working with Libya on maritime and defense deals that would lead to a new crisis between Ankara and Athens. Ankara has been threatening Greece over the last year and this has led to concerns about possible conflict. Although that seems far from possible, it’s plausible Ankara could create a crisis. Israel has close ties with Greece and Cyprus and while Israel does not want to be in the middle of a conflict in the Eastern Mediterranean, Netanyahu was keen on Greece-Israel ties. This means that maritime borders matter.

Because maritime borders matter, the recent deal between Israel and Lebanon also saddles any incoming Israeli government with complex problems. The Lapid government rushed into a US-backed deal with Lebanon, amid threats by Hezbollah and demands from Hezbollah that Israel not exploit energy resources in the Karish field. While Israel has rights to do what it wants in Karish, Lebanon has extended its claims, setting up potential tensions. Yet, behind Lebanon’s claims were Iran and Hezbollah trying to lay claim to waters off the coast.

Israel signed a deal with Lebanon that some think will lead to peace and prosperity on both sides, but there is no guarantee Hezbollah will not feel its “victory” in the deal, which is what it tells itself it accomplished, will not lead to provocations. Hezbollah could use the cover of foreign companies exploring in the Kana field, on the Lebanese side of the line, to threaten Israel or provoke tensions. If Israel responds then Israel could be portrayed as breaking the agreement. In this setup, Hezbollah can do whatever it wants because it is an illegal armed terrorist mafia militia, and Lebanon can eschew any responsibility, pretending that Hezbollah just does what it wants.

As we have seen with the Iran deal, countries and terror proxies linked to Iran like to force “deals” on democracies by threatening war if the democracies don’t accept the terms. Their gamble is that countries prefer deals to war. Netanyahu’s policy has generally been to try to avoid war but also keep up deterrence or at least keep up some kind of managing of these conflicts, as he did in Syria for a decade. This means that while Netanyahu is very familiar with the issues in the northern maritime border, and the Hezbollah-Iran axis, a new maritime deal adds weight to Israel’s freedom of action in the north.

Together, the Turkey ties and the Lebanese mezze of problems are tied to wider challenges in the region. Netanyahu, if and when he forms a government, will need to deal with two potentially interlinked crises both of which Iran, via Hezbollah, and Turkey or Hamas could cook up at any time.